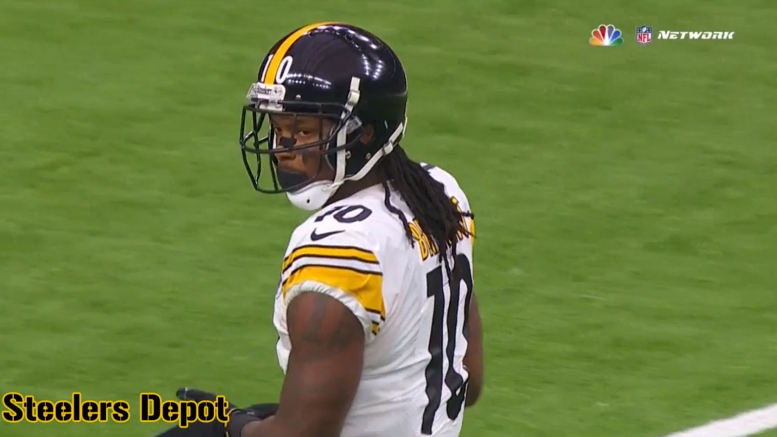 The pre-draft rumor machine is now in high gear with the start of the 2018 NFL Draft now just a few more hours away and the Pittsburgh Steelers are already caught up in it.

According to Dan Graziano of ESPN.com, Steelers wide receiver Martavis Bryant is one of five NFL players he’s hearing could be traded to another team by the time the 2018 NFL Draft comes to end in Dallas Saturday night. Below is Graziano’s report on Bryant.

The noise around this situation has died down since October, when Bryant’s trade demands became public. But with one year left on his contract, Bryant is still hoping to find a situation that gives him a chance to function as a team’s No. 1 option. That’s not going to happen with Antonio Brown and Le’Veon Bell in Pittsburgh, obviously, and Pittsburgh has been quietly listening to offers over the past couple of months. Part of the holdup has been that some of the league’s more receiver-needy teams, such as Baltimore and New England, are rivals to whom the Steelers wouldn’t want to trade such a talented player. Pittsburgh is a win-now team that believes Bryant can help it win in 2018, so the offer has to be good.

To me, this is all just noise and I will be totally shocked if Bryant is traded in the coming days. For starters, Steelers general manager Kevin Colbert has long-since nipped the notion of the team trading Bryant in the bud a few months ago and pretty emphatically at that.

“I can address this very efficiently, we have never, ever made one phone call offering Martavis Bryant for a trade,” Colbert said in February while in Indianapolis for the annual scouring combine. “Teams have inquired to us based on media reports about the possibility of us trading him and we have quickly dismissed those. Martavis is a Pittsburgh Steeler. We want him to continue to be a Pittsburgh Steeler.

“He put together a great season last year. You know, a lot of kids don’t make it back from the one year suspension and he did and he did a lot of good things. He did a few things I think he regrets, you know, with the social media aspect of things, but he got through it. He finished great and we are absolutely not in the trade market. We’re not pursuing it and if anybody pursues us we quickly dismiss it.”

I just can’t see how Colbert’s stance has changed since uttering those remarks. On top of that, the Steelers wide receiver depth chart isn’t currently very deep right now as behind Antonio Brown, JuJu Smith-Schuster and Bryant now sits only Darrius Heyward-Bey and Justin Hunter when it comes to experienced players. Trading away Bryant, who by the way, isn’t likely to fetch much due to his off-the-field history and fact that he’s currently in the final year of his contract, doesn’t make much sense.

The Steelers might draft another wide receiver over the course of the next several days, but even if they do, that player will likely need some time to develop and that’s yet another reason for the Steelers to not trade away Bryant now. They can just let him walk via free agency after the 2018 season is over and hopefully get a lot of compensatory draft pick value as part of the process.

I wonder what other nonsense we’ll be treated to this weekend when it comes to the Steelers and the unsubstantiated rumor machine. Stay tuned.