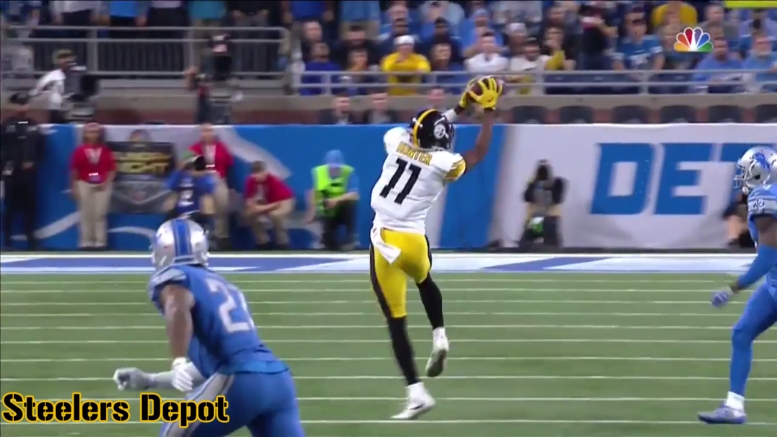 Well, I thought yesterday’s exit meeting would be the last of the offseason with the late development of the Steelers’ re-signing of Stevan Ridley, but now they have also re-signed Justin Hunter, and given that he was a player who spent the entire year with the team, it would be a disservice to ignore him now that he is back.

A veteran of four seasons at the time, the Steelers brought in Hunter as a potential insurance policy against whatever might go wrong at the mercurial wide receiver position. There was uncertainty over Martavis Bryant’s status returning from suspension and about Sammie Coates’ ability to contribute after mangling his fingers the year before. JuJu Smith-Schuster was not yet a thing.

By the time training camp rolled around, however, the wide receiver depth chart had filled out quite enough that it was by no means clear if he would even make the team. Some late contributions in the final couple of preseason games ultimately put him over the edge to make the team as the sixth body.

But he still spent much of his time as a healthy scratch thanks in large part due to his lack of contributions on special teams. An opportunity presented itself when Eli Rogers lost his slot role to Smith-Schuster and then muffed a punt, and Hunter got a crack at securing a regular gameday helmet for two games, but he failed to make much of a mark during that time.

Most of his contributions over the remainder of the season came courtesy of adversity. Bryant was benched for a game, Smith-Schuster was injured for one game and suspended for another, and then Antonio Brown was injured for the final two. His lone touchdown came in Week 16.

In all, he recorded only four catches for 23 yards and the aforementioned touchdown in seven games, which is not quite remarkable for a 6’4” receiver with speed, but as mentioned he was not given a ton of opportunities.

Still young at 26 and holding a personality that is well-liked by his peers, it makes sense for the team to have brought him back, even if he will have quite an uphill battle to make the roster again. Unless they quietly have bigger plans for him.