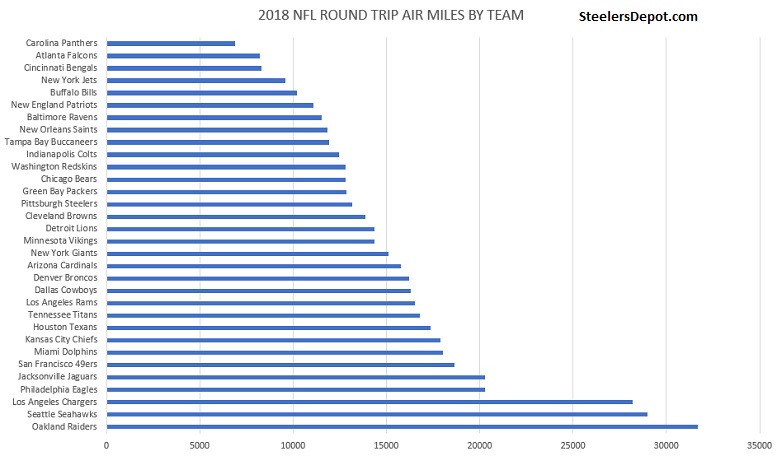 According to my research on this particular air miles calculator website, the Steelers will log a total of 13,180 air miles during the 2018 regular season and that includes round-trip numbers. While that number might seem like a lot, 18 other NFL teams will likely fly more air miles than the Steelers will in 2018.

Strangely enough, the Steelers flew about the same distance during the 2015 regular season (13,196 air miles) as they will in 2018. Their 2015 schedule consisted of road games against the New England Patriots, St. Louis Rams, San Diego Chargers, Kansas City Chiefs, Seattle Seahawks, Baltimore Ravens, Cincinnati Bengals and Cleveland Browns. The Steelers were 4-4 in those 8 road games that season.

As you can see in the table below, the Carolina Panthers are scheduled to log the least amount of air miles during the 2018 regular season while the Oakland Raiders will fly the most.

During the 2019 season, the Steelers are currently scheduled to play the Arizona Cardinals and San Francisco 49ers on the road in addition to a yet-to-be-determined AFC West team. Should that team wind up being the Raiders, the Steelers will fly 15,382 air miles during the 2019 regular season.