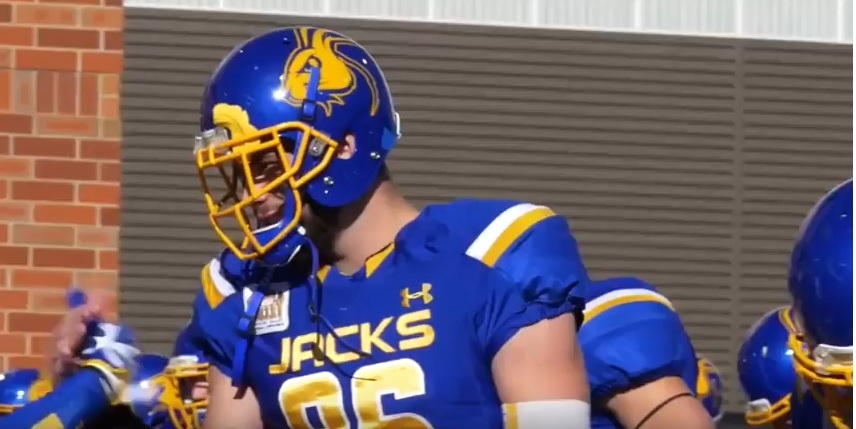 We haven’t heard much of TE coach James Daniel’s travels this Pro Day season. But according to a report from Draft Analyst’s Tony Pauline, Daniel was on hand to watch South Dakota State’s Dallas Goedert workout today.

According to Pauline, Daniel was one of seven tight end coaches to watch Goedert today.

This was Goedert’s first workout of the pre-draft events. He suffered a hamstring injury 20 minutes into the first practice of the Senior Bowl that forced him to miss the rest of the week and left him unable to work out at the Combine. At Indianapolis, he weighed in at 6’4/5, 256 pounds with 34 inch arms and 10 inch hands. Pittsburgh had a formal interview with him during the Combine.

According to Pauline, Goedert turned in a 35 inch vert, 10’1″ broad, and 6.87 three cone, impressive numbers across the board. To the disappointment of some, he opted against running his 40, meaning teams won’t have a time on him before the draft.

Goedert is considered one of the top small school prospects in this years draft class. Most project him to go off the board somewhere in Round Two, For Pittsburgh, taking a small-school prospect in the top two rounds is a rarity, something that hasn’t happened since 2004.

In 2017, he caught 72 passes for over 1100 yards and seven touchdowns. Surprisingly, it wasn’t his best statistical year. That came in 2016 when he caught close to 100 balls, nearly 1300 yards and 11 touchdowns. On paper, he has the blend of athleticism and size teams covet. Goedert will fight with Penn State’s Mike Gesicki and South Carolina’s Hayden Hurst to be the first tight end off the board.

It’s a position that is lower on the list of priorities for Pittsburgh. But with no immediate “need” for the Steelers, a board that is pretty wide open, it’s impossible to predict where the draft will take them, even if history and current roster construction suggests against Goedert.

Check out our full scouting report on him below.