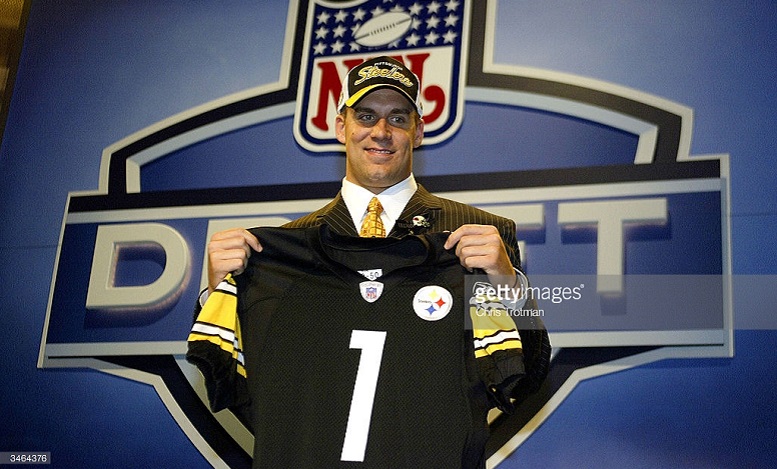 This past week the Pittsburgh Steelers posted a video of quarterback Ben Roethlisberger being selected in the first-round of the 2004 NFL Draft and it brought back a lot of memories.

For starters, I remember we had just built a new house and moved into it and in fact, my home office floor still needed to be finished due to us changing our mind the last minute that we wanted carpet in there. I remember watching the 2004 NFL Draft in that room while unpacking boxes and when then-commissioner Paul Tagliabue announced that the Steelers had selected Roethlisberger with the 11th overall pick in the first-round, I remember being both elated and confused.

I was elated with the selection of Roethlisberger because it was the first time since 1980 (Mark Malone) that the Steelers had drafted a quarterback in the first-round and just the second time in my life they had done so. ( I was not even 2 when Terry Bradshaw was drafted).

I was, however, also confused by the selection of Roethlisberger because quarterback Tommy Maddox was entering the third-year of a five-year contract that he had signed in 2002 and fellow quarterback Charlie Batch was entering the second-year of a two-year contract he had signed in 2003. Oh, and the Steelers had drafted quarterback Brian St. Pierre in the fifth-round of the 2003 NFL Draft so no way in hell would they draft another one the very next year as they already had three under contract and the depth chart for 2004 was seemingly set.

On top of everything else, most of the Steelers pre-draft talk at the time centered around the team potentially selecting offensive lineman Shawn Andrews out of Arkansas with the 11th overall pick. As you all probably know by now, Andrews would have likely been the pick had Dan Rooney not stepped in and steered the draft room talk to Roethlisberger.

“But when our turn came, I couldn’t bear the thought of passing on another great quarterback prospect the way we had passed on Dan Marino in 1983, so I steered the conversation around to Roethlisberger,” Rooney wrote in his 2007 autobiography. “After some more talk, we came to a consensus and picked Roethlisberger.”

Maddox obviously wasn’t likely to become the Steelers next great quarterback at the time, but even so, not many of you will likely forget his 2002 Wildcard performance in the win over the Cleveland Browns. Besides, the Steelers defense was seemingly coming of age at the time and Maddox seemed just good enough to potentially help guide the offense on a Super Bowl run in 2004.

Roethlisberger, however, played well enough during the preseason to win the backup quarterback job and Kittner was ultimately cut right before the 2004 regular season started because of that. In fact, St. Pierre wound up being cut just few days later and if my memory serves, he landed on the team’s practice squad. In short, the Steelers opened the 2004 regular season with just two quarterbacks on their 53-man roster in Maddox and Roethlisberger.

As all of you know, Maddox went down with an injured elbow during the Steelers second regular season game of 2004 against the Baltimore Ravens and Roethlisberger took over and never lost a game as a starter until the AFC Championship game against the New England Patriots.

In summation, the Steelers entered the 2004 NFL Draft seemingly set at the quarterback position with three under contract only to have two of them ultimately not on the Week 1 53-man roster.

Is there a lesson to be learned here? I’m not really sure, but even though the Steelers currently have three quarterbacks under contract for 2018 with one of them just being drafted a year ago, perhaps none of us should be surprised if they ultimately draft yet another one this year in the first few rounds and especially being as they seem to be doing their due diligence on Oklahoma State’s Mason Rudolph and Louisville’s Lamar Jackson.