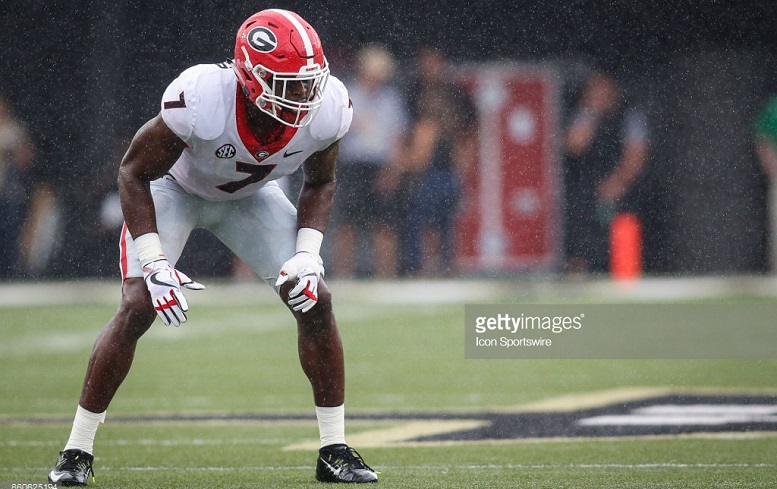 With the 2018 NFL Draft now less than a month away, ESPN draft analyst Mel Kiper Jr. decided that Wednesday was a perfect day to release his third mock of the first-round. After previously mocking former Boise State linebacker Leighton Vander Esch to the Pittsburgh Steelers in version 2.0, Kiper now has them selecting former Georgia edge-rusher Lorenzo Carter with the 28th overall pick in the 2018 NFL Draft.

Yes, the Steelers took an edge rusher in T.J. Watt in the first round of last year’s draft, but I still think this is a position of need. Bud Dupree hasn’t quite broken out like we thought he might when he was selected on Day 1 in 2015. The reason I’m going with Carter here is because he could potentially play inside linebacker too, taking over for Ryan Shazier. Carter showed versatility at Georgia and wasn’t always asked to rush the passer — he had only 9.5 sacks over the past two seasons.

The Steelers had at least one key member of their organization at Georgia’s pro day this year as it was reported that general manager Kevin Colbert attended the event. Georgia has several top-rated players in this year’s draft class and that list includes Carter, linebacker Roquan Smith and running backs Nick Chubb and Sony Michel, just to name a few.

As for Carter, specifically, he measured in at this year’s scouting combine at 6047, 250-pounds with 34-inch arms and 10 3/8-inch hands. He ran his 40-yard-dash in 4.50-seconds while in Indianapolis in addition to recording a 36-inch vertical jump and a 10’10” broad jump. In his four seasons at Georgia, Carter, who is reportedly already 22 years-old, registered 166 total tackles, 14 sacks, one pass defensed and 6 forced fumbles.

On the surface and after watching several of Carter’s games from last season, he doesn’t seem like a bonafide first-round prospect. Instead, I see him more as an early day-two player likely to hear his name called in the first 65 to 70 selections.

In case you’re curious, Kiper has Vander Esch going to the Los Angeles Rams at 23rd overall in his latest mock draft. As for the other top-rated inside linebacker prospects in this year’s draft class, Kiper has Smith mocked to the Oakland Raiders at 10th overall, Virginia Tech’s Tremaine Edmunds to the Buffalo Bills at 12th overall and Alabama’s Rashaan Evans to the Dallas Cowboys at 19th overall. Kiper also has five quarterbacks being on the board by the time the Steelers pick 28th overall.