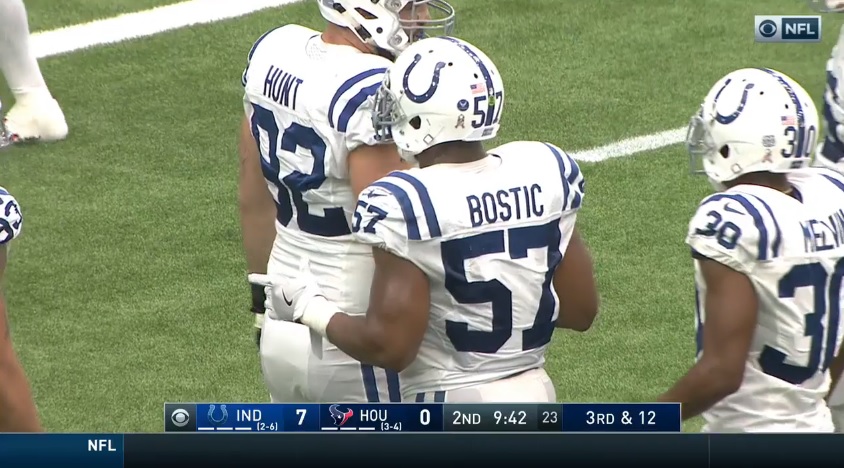 You can’t always get what you want.

That’s the famous line in The Rolling Stones song with the same title. It’s how I evaluate the Pittsburgh Steelers signing Jon Bostic, dipping their toe into free agency waters for the first time this offseason, being the second-to-last team to make a move.

But if you try sometimes, you might find, you get what you need.

That finishes out the rest of the chorus. That’s what they have in Bostic. No, he is not an elite, ideal replacement for Ryan Shazier. But on a base level, he checks the requirements they need for the Mack position. Versatility, availability, an all-situations kind of player.

Today, we’re going to break down Bostic’s tape from 2017. Go through his run defense, coverage, the rest, and look at the good and bad at his game. At the end, we’ll make a final evaluation.

Bostic was the Indianapolis Colts’ every down linebacker in 2017. Officially, he played 85% of the snaps but that includes the two games that he missed, put on IR with a knee injury suffered in December. When healthy, he almost never came off the field. In 13 of 14 games, he played 100% of the defense’s snaps and 95% in the other.

He played the Buck and the Mack spots. Mostly the Buck in the boundary but he flipped around, rotating with several linebackers this year. Eight different LBs played at least 100 snaps this year for Indy. The Colts often stayed in a more traditional sub-package defense, a 2-4-5 and he stayed on the field when they went with a more hybrid 2-3-6.

Occasionally, he would line up and rush off the edge. He would play the slot against some spread sets and I’ve see him take the tight end solo on the outside.

Bostic played it reasonably well to the tune of 97 tackles, 52 of them versus the run according to Pro Football Reference’s Play Index. What’s most impressive is his ability to process, athleticism to string out perimeter runs, and hand use to defeat blocks. He does well to anchor, square his shoulders, and keep vision on the football.

Let’s look at this years game versus the Steelers. Late in the game, Pittsburgh running to their pin/pull scheme with Le’Veon Bell. Bostic, #57 (the number he’ll wear for all these clips), rips through David DeCastro on the perimeter and forces Bell to keep his angle wide. It’s only a gain of three.

Not the only time that happened either. Same thing against Todd Gurley in Week One, though too often, the Colts failed to have a forced player to truly contain the back.

But he can take on tight ends and fullbacks in the hole too. He does a great job of staying square and being able to use his hands to defeat the block, not turning his shoulders and allowing himself to be washed. Left guard pulls but Bostic rips under him and stuffs Gio Bernard at the line.

This is one of my favorite plays of his. Slide as the tight end pulls across, not commit early and still prevents the cutback and once the back hits the hole, fill and finish with violence.

He can get engulfed by tackles, who are bigger and match/exceed his length (Bostic has 33 inch arms). I saw him get run out by Joe Thomas once but hey, that’s a Hall of Famer. It happens. Overall, I like what I saw from him.

It’s good, not great. Like we pointed out above, his every-down background gives a lot of tape to work with in coverage. There’s not a ton of splash. One career interception, that came in his rookie year, and listed to have seven pass breakups, though going through the tape, there aren’t that many instances of him truly playing the ball.

The best one I saw came against Houston this year. Empty set, needing to defend the entire field. Zone coverage but Bostic gets depth, tracks the ball, and throws up a hand to bat it away from the pass down the seam.

It’s low on the list of importance but I would characterize his hands as pretty bad. Trouble finishing plays, even layups, and balls have gone in and out of his chest.

He didn’t do a lot of matchup man coverage the way the Steelers ask their Mack to do. Mostly spot dropping zone, walling off the seam threat rather than truly carrying him. He did play some man when moved to the slot or cover a TE that moved around or when bailing off a fake blitz.

Bostic shows good short area quickness to change directions and explode out. It’s not a Sportscenter Top Ten play but I like how he closes on JuJu Smith-Schuster on his out cut and doesn’t create a window to allow the throw. Forces the checkdown.

Often, he was asked to get true Tampa 2 depth, sometimes even deeper than the safeties. Winds up matching on Antonio Brown deep downfield here and the ball has to go elsewhere. He’s squarely in the middle of the field in the clip below.

Vertically, he can struggle in man-to-man. Watch the tight end beat him down the seam. That’s Gerald Everett, a good athlete, and Bostic can’t find the ball and finish the play. Ends up as a 39 yard gain. Top of your screen.

He’s not on Shazier’s level, which is obvious and expected, and there are some limitations to what he can do in coverage. That may limit the Steelers scheme a little bit but not terribly so and Bostic shows enough athletic ability to be the Mack linebacker.

He was used a fair amount as a blitzer though didn’t see much success. His one sack from 2017 was from merely existing. Initially dropped into coverage and then was the nearest bystander when Andy Dalton ducked out of bounds in Week 8. He struggles one-on-one against guards and won’t win unless the scheme opens him up or if he gets a chance on the back. But those are things Keith Butler’s scheme regularly provides. They don’t want their linebackers on linemen.

I would call him an ineffective blitzer and the stats bear that out.

He runs hard to the ball and covers sideline to sideline. Didn’t see him loaf or take plays off. Rarely did any of his teammates pass him up flying to the football. Overall, he is a good open field tackler who finishes plays with authority.

The injury history is lengthy. Like we said, he suffered a season-ending knee injury in mid-December last year. He missed all of 2016 with a broken fifth metatarsal suffered in training camp during a joint practice with the Steelers in Latrobe. He also suffered back problems in 2015 which seemed to plague him for months.

Bostic is one of the few candidates who fit what Pittsburgh needs from the Mack position. There’s no projection needed. He’s shown to be an every down player. He’s used to dropping into coverage, protecting the sticks on 3rd down. There aren’t a lot of linebackers available who play every snap, especially at what I assume is a cheap price tag.

Pittsburgh certainly could – and should – look to keep adding at the ILB position. But it offers them some flexibility and not feeling obligated to take one 28th overall. They can wait until the 2nd or 3rd round and look at more of a project, someone who can be more niche or take a backseat role their rookie year (if drafted in the third round).

Once the Steelers missed out on who they wanted, they got who they needed.