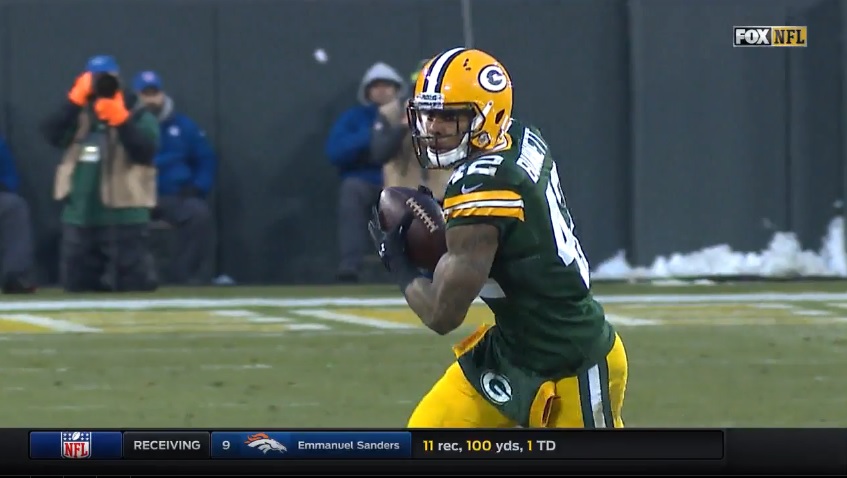 Before baseball called them closers, relief pitchers were sometimes referred to as stoppers. Today’s conventional wisdom means teams wait until the 9th inning to bring in their best pitcher. But in the past, the best guy, their stopper, would come in for any jam, any big at-bat, even if it wasn’t at the end of the game. It’s logical – why wait to use your closer if the rest of your bullpen can’t hang onto the lead? The pitcher wasn’t a closer; he was a matchup guy. Your best versus their best. Let’s dance.

Morgan Burnett, reportedly about to sign with the Pittsburgh Steelers, is their new stopper. He is their matchup guy. One who can line up over the entire field, take on – and often take away – the opponent’s best player or key target on third down. We’re going to get into the traditional breakdown, Burnett versus the run, the pass, all that jazz, but I want to address that versatility first. If there’s one takeaway you need to know about this apparent signing, it’s that.

2017 was a bit of a down year for him. No interceptions, injuries held him to just 12 games. But still, he was very much their stopper.

Flip on the Seattle Seahawks game and you’ll see him match up against Jimmy Graham. Imagine that – a safety who can defend a tight end. 3rd and 9 breakup, playing the pocket and poking the football away. Burnett is #42, as he will be in all the clips throughout this post.

When he wasn’t matched up on Graham, one of his key roles was to spy/shadow Russell Wilson. Keeping him in the pocket, forcing him to beat the Packers with his arm, not his legs. He didn’t always execute it perfectly, Wilson ran for 29 yards at the end of the first half, but overall, he did well, and it shows that when the Packers needed a guy to contain Seattle’s best dude, they turned to Burnett.

Against the Steelers, Burnett was always in Le’Veon Bell’s shadow. When Bell motioned out, there was Burnett. In the slot? Burnett. In a rap video? I imagine Burnett’s hanging out in the background. 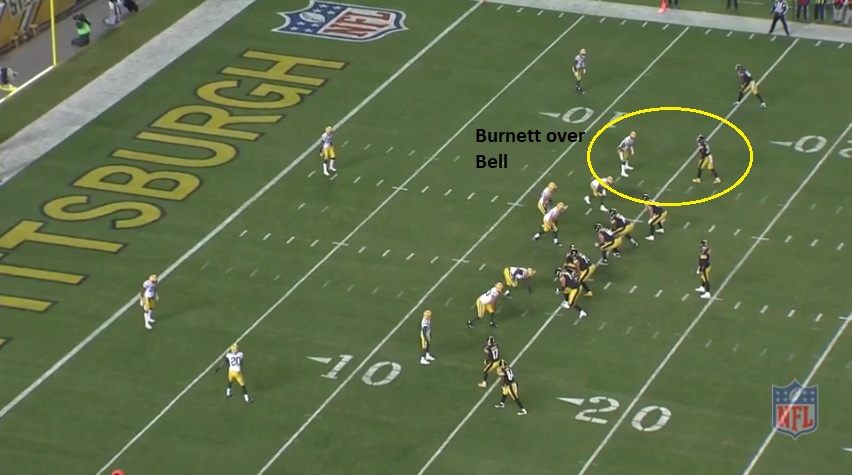 How about 2016? 3rd and 9, money down for the defense. Time to get off the field. Burnett rolled down near the line of scrimmage, matching Julio Jones on this 10 yard curl. Pass broken up. Off the field.

That’s your stopper. And on a macro level, my biggest takeaway from watching his tape. Teams love to create mismatches with big tight ends, pass catching running backs, moving their top WR to the slot. Burnett is good enough to handle most of that, though I imagine he’ll have trouble running stride for stride against elite/speedy wide receivers.

Let’s get back to the breakdown, evaluating each area of his game.

2017 was a little different from him, as far as I can tell. In Green Bay’s base defense, or even their “base” sub-package, 3-4 and 2-4-5 respectively, Burnett was the strong safety. Sometimes in the box but also in the traditional, deep half role. 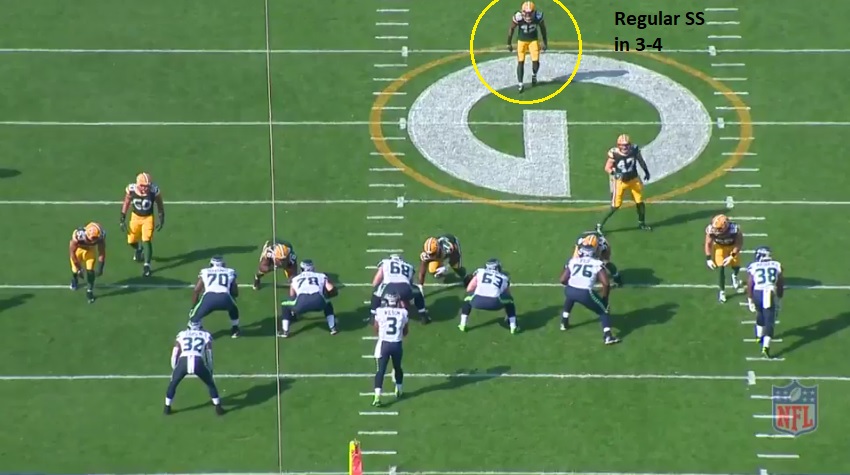 But when Green Bay went sub, their 2-3-6 was common, Burnett became the de facto linebacker. Rolled down to the line of scrimmage, often poking through the A gap. Remember Troy Polamalu in 2013 after Larry Foote went down? Burnett occupied a similar ole last season. 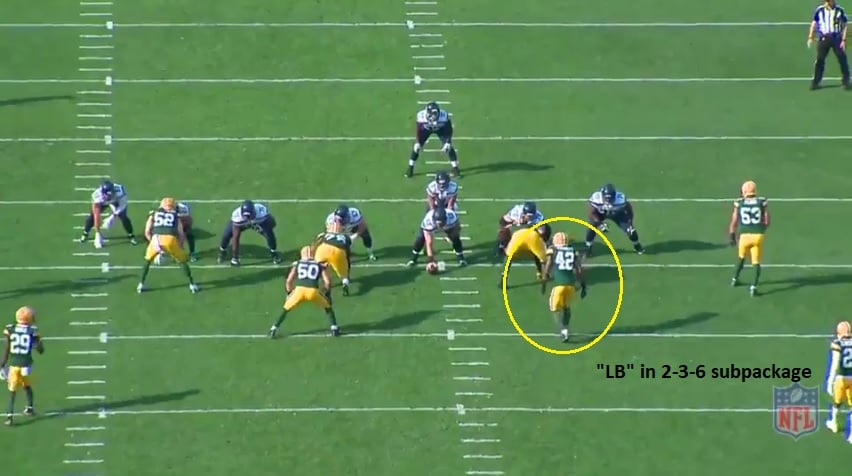 Like I wrote above, he moved around based on what the offense tried to scheme. He’d be over the slot, walk out on the back versus empty (like a linebacker would) and play the deep half in their base defense. Occasional blitzes but nothing too crazy. Spot drop zone and matchup man coverage were common. He usually took the back flaring out if he wasn’t assigned to the tight end. 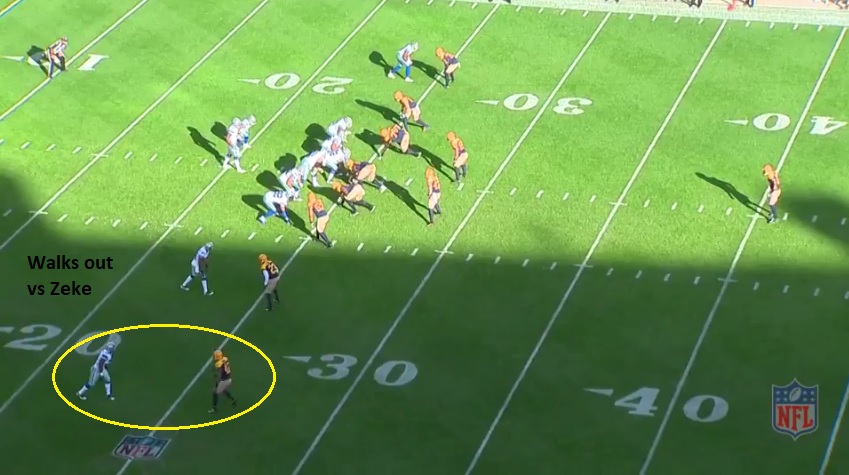 Very good. Partially why he should be viewed as a strong safety and not a free safety playmaker. You gotta be tough to be undersized and sit a foot from the line of scrimmage and he had no problem taking on offensive linemen. Eddie Lacy is in a weird spin cycle here but watch Burnett work of Seattle’s left tackle and chip in on the stop.

Strong in the alley Reliable, wrap up tackler. Not a big hitter but I’m ok with that – and I’m guessing you’ll be too. Watch him stonewall Zeke Elliott in 2016. No yards after contact. And that’s a big back lowering his shoulder into him.

He uses his hands well to work to try and punch the football out. Eight forced fumbles in his career. High IQ player who jumps on loose balls, goes for the punch out when chasing from behind, all while still managing to wrap up.

I’ve already shown some of those clips above. Impressive ball skills. That’s separate from hands. Hands are the ability to catch the ball, finish the play, record the interception. Ball skills are about breakups – and that’s where he excels. Interceptions are fleeting (nine in 102 starts, two in the last three seasons).

Most of what I’ve shown so far is Burnett in the box and carrying a player. But I like his ability to read and drive on the football for anything intermediate too. Proper angles, physical, finishes the plays.

Watch him finish this play against Jason Witten.

Or run this route for Jimmy Graham, undercutting the dig and picking the ball off.

To be fair, all is not perfect. Work outside of the box and middle of the field and Burnett will have problems. Angles help mask a lack of great speed – I’d call it average for a SS – but he’s not the fastest guy on the field. If you’re wondering, the one time he’s played New England in 2014, Rob Gronkowski made a couple of nice plays against him, though Burnett didn’t do anything terribly wrong.

Last year, Burnett failed to get width in his Cover 2 shell to squeeze this throw to Antonio Brown, who sidestepped him into the end zone.

As I mentioned above, Burnett makes his dough in the middle of the field and within 15 yards of the line of scrimmage. Fill the alley, jam the TE, breakup the dig, all that grunt work. Get him out of that region and I think you’re risking exposing an average athletic skillset.

Not much to report. Didn’t take a real good look at it. 7.5 career sacks, three of them coming in 2016. Dom Capers had been his DC so you know he’s used to that aggressive scheme. Couple of fire zones got him free. He’ll be fine there; Keith Butler uses his SS to blitz much more than his FS. So Burnett will get some work there.

All about versatility. Burnett can be that dime defender, even if he is also the starter (someone else becomes the deep safety) on 3rd and long. That’s an answer the Steelers haven’t had for the past three years in their dime defense. Two unsuccessful seasons of Robert Golden, one only slightly better year with William Gay. Both are now out the door.

Burnett is going to be that stopper who you can matchup on a TE, WR, or RB. Key flexibility in a Butler scheme that throws a lot of curveballs (11 personnel groupings last season). Burnett is regarded as high character, leader, a fan favorite in Cheesehead Land that fans don’t sound happy about seeing him go. Sort of the opposite of Mike Mitchell in terms of fan reaction.

Signing Burnett also gives the Steelers options in the draft, just as they got by picking up Jon Bostic. Burnett can start Day One no problem. If a safety gets drafted high and is worthy of it instead, Burnett can be that 6th DB. But now the Steelers can focus more on the talent, not the position, and they’ll be better off for it.

My guess? Burnett starts the year at strong safety. Sean Davis kicks to free safety (which I am not thrilled about). Draft pick comes in for dime packages as the deep, cover SS while Burnett hovers near the line of scrimmage. That has me feeling a lot more confident this year than what the team was trotting out in 2017.

Steelers aren’t getting a spectacular signing. And like Bostic, they are rolling the dice a bit on the injury front. Burnett hasn’t played all 16 games since 2012. But they’re still going to draft high, give themselves options if/when injuries happen, and above all, they got a stellar stopper.