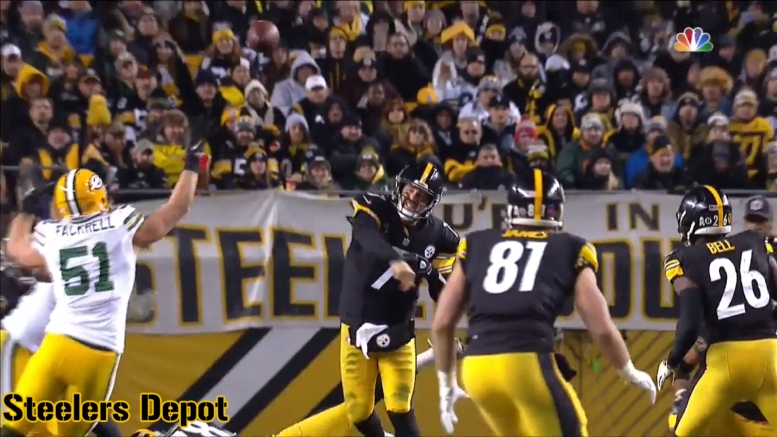 It is not altogether clear why—inevitably, there is a number of contributing factors—but one major area in which Pittsburgh Steelers quarterback Ben Roethlisberger struggled, at least during the early portions of the 2017 season, was in the deep passing game.

Roethlisberger’s success rate in completing passes when he threw the ball far down the field really lagged in the early games, but it did improve as the year went on. The Steelers also played more at home in the second half of the season and into the playoffs, and Pro Football Focus points out that his numbers greatly favor his home performance on deep passes.

According to a stats graphic that they recently published, he threw a higher frequency of deep passes on the road, but did better at home. He completed almost 40 percent of his deep passes at home compared to under 25 percent on the road, while throwing far more touchdowns and fewer interceptions for a passer rating of 117.1 versus 47.6.

Ben Roethlisberger’s home vs. away deep passing splits from 2017 pic.twitter.com/IdLKZn96yn

It helps that he had a big showing on deep passes in the postseason. In just that one game alone, he completed six of eight deep targets for 190 yards with four touchdowns, posting nearly a perfect passer rating. Of course, a number of these were desperation throws, including on fourth down.

During seven home games in the regular season (because he was rested in the season finale), Roethlisberger attempted 42 deep passes, completing 13 of them for 435 yards yards and four touchdowns with one interception and a quarterback rating of 92.9. Add in the postseason game and that’s 19 completions on 50 attempts for 625 yards with eight touchdowns to one interception.

It’s notable that so much of that success came late in the year. In the second half of the regular season, he completed nine of 24 deep passes for 281 yards and three touchdowns. In the first half, he completed just four of 18 attempts for 154 yards with one touchdown and one interception.

As for his eight games on the road, Roethlisberger completed 11 deep passes, but it took an astonishing 46 attempts for 466 yards, throwing just one touchdown to three interceptions, though three of those deep passes were dropped. He only suffered one drop at home.

Again, let’s take it a half at a time. He played only three games on the road in the second half of the season, and he didn’t fare well, either. He completed just three of 15 attempted passes for 129 yards and an interception, with only one of those passes dropped.

In the first half of the year, in five road games, he completed eight passes, though it took 31 attempts, with two drops. He passed for 317 yards with one touchdown and two interceptions.