For the business geeks, some food for thought this lazy Saturday afternoon. Business Times Research studied all 32 NFL clubs and measured their success over the last decade. The Pittsburgh Steelers, as you’d expect, came away in good shape, ranked as the third most successful franchise over that span. 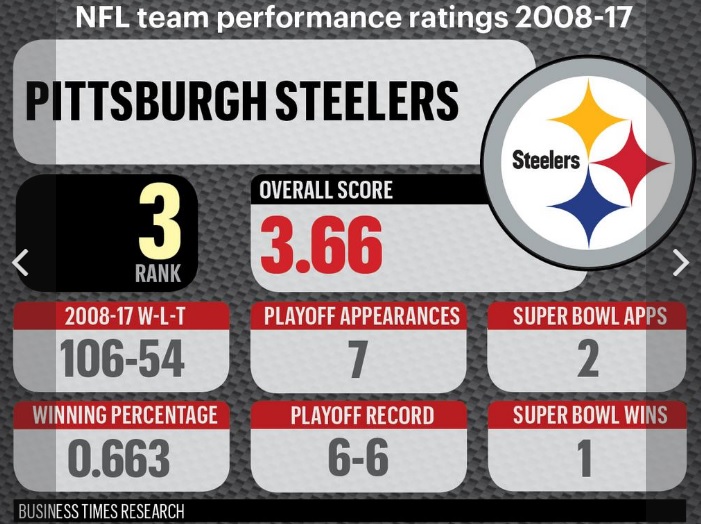 Pittsburgh was just one of seven teams to finish with a positive score. The New England Patriots, of course, finished well ahead of the rest of the pack, a score of over 11. They could add to that tomorrow evening.

Baltimore finished one spot behind the Steelers, aided by their Super Bowl win and better playoff record (10-5). The Cincinnati Bengals finished squarely in the middle at 16th with six playoff appearances but zero wins. And the Cleveland Browns, oh the Browns, predictably finished in dead last with a score (-9.068) two points worse than anyone else. Since 2008, they have a record of 38-122.

For Pittsburgh, it’s a level of consistent success unmatched by most teams in the NFL. There have been plenty of disappointment with those high expectations but plenty of fanbases would trade that success in a heartbeat.

Rounding out the rest of the top five were the Green Bay Packers at two and the Seattle Seahawks at five.