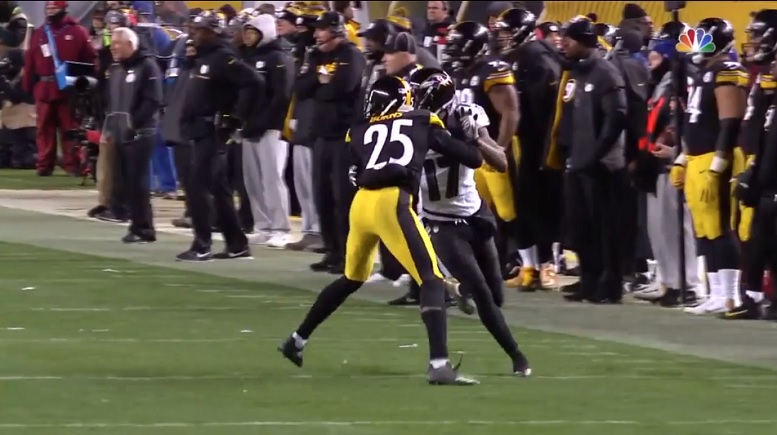 In addition to them trying to figure out what is and isn’t a catch, the NFL Competition Committee is reportedly currently hard at work examining a few other potential rule changes as well. One of proposals offered by the committee this offseason is to change the penalty for defensive pass interference from a spot foul to a 15-yard penalty at most.

NFL competition committee is discussing the possibility of limiting defensive pass interference penalties to, at most, 15 yards.

According to stats kept by Pro Football Reference, defensive pass interference was called 266 times in 2017, or more than once per game for an average of 18.09 yards per game. It was the third-most frequent flag behind offensive holding and false start last season, according to Jeremy Bergman of NFL.com.

In case you’re curious, the Pittsburgh Steelers were flagged seven times for defensive pass interference in 2017 with five of those penalties going against cornerback Artie Burns. One of those five were declined, however, and the other four resulted in 91 penalized yards. Steelers safety Sean Davis and cornerback Mike Hilton were responsible for the two other defensive pass interference calls in 2017.

According to some quick research, the Steelers offense drew 15 defensive pass interference penalties last season for 300 yards. One of those, however, came during a two-point attempt. The Baltimore Ravens offense, on the other hand, only drew four defensive pass interference calls in 2017. Two of those, coincidentally, went against the Steelers and Burns specifically.

As NFL.com reports, in perhaps as a counter-measure, the league is expected to increase “illegal contact” calls as an effort to limit the amount of hand-fighting on plays. On a related note, the Steelers defense was not penalized for illegal contact last season.

From @NFLResearch: the difference between DPI yards gained by each team in 2017 and what it would have looked like under proposed new rule pic.twitter.com/fJVMbBXPJL