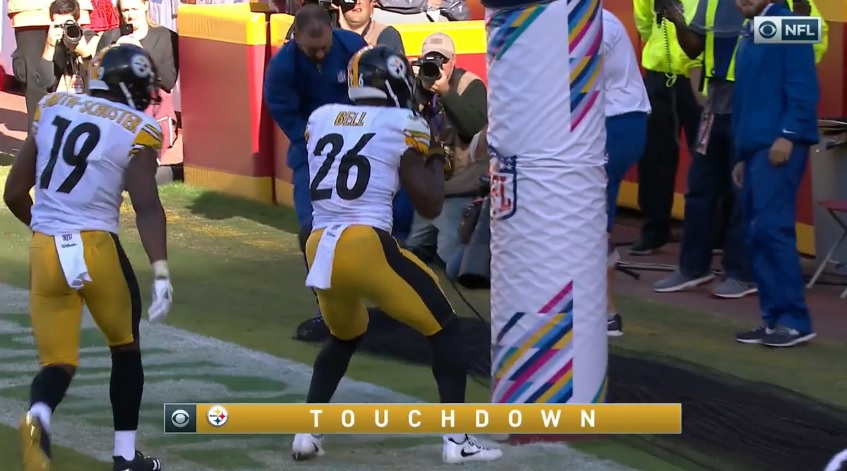 Right before the Pittsburgh Steelers’ playoff loss to Jacksonville, an ESPN report came out that looked at Le’Veon Bell’s future. In it, Bell seemed to indicate he would consider holding out for all of 2018 or retiring if the team put the franchise tag on him for the second straight year.

Earlier today on NFL Network, Bell was asked to address those comments and doubled down on them, confirming he would “absolutely” consider walking away if that’s what happened.

“I would consider it,” Bell said. “That’s what the question was. Would I consider it?”

Bell was then asked if he would consider it. He wasted no time replying.

It’s obviously unlikely Bell would truly walk away from the game if he was tagged but it’s clear he’s going to use the leverage available to him – and when you’re able to be tagged, there isn’t much – to get a long-term deal out of the Steelers.

Asked what he would do if he retired, Bell said he would “chill, tour, go around the world, go to places I’ve never been.”

He did reiterate that he still has confidence in working out a long-term deal with the Steelers and repeated that he thinks he is closer now than where the two sides were a year ago, though that’s a pretty obvious statement to make after months of negotiation last summer.

At the end, the hosts joked about Bell’s tweet saying that $60 million wasn’t enough to play for the New York Jets. He declined to share the exact number he’s looking to get paid. But when asked if he got $50 million guaranteed if he would sign, Bell said he would. Asked if $30 million guaranteed is enough, he hesitated.

Bell reportedly turned down an offer that would’ve paid him $30 million through the first two years and $42 million through three years, according to this tweet from last year. Without a deal, he held out all of camp and the preseason and played under the franchise tag.

While both sides have been politically correct the last few weeks about keeping Bell, coming to an agreement is still going to be difficult and not something that is going to occur in the near-future. Both sides don’t have a good reason to budge; Bell is still the best back in the league and the Steelers gave their top offer a year ago. It’s a saga that has the potential to play out deep into the summer.

Catch Bell’s interview on NFLN below.

You close to a deal yet? ? pic.twitter.com/kAmFJxOA05