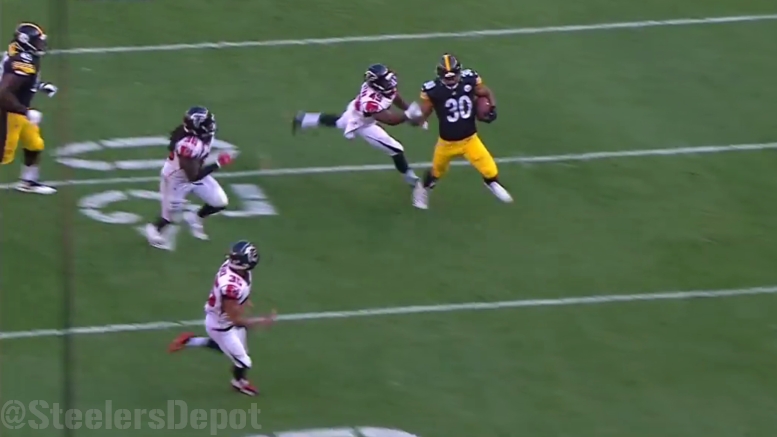 He didn’t get a lot of opportunities—just 32 carries all season—but Pittsburgh Steelers running back James Conner did not look too bad, at least in some aspects, during his rookie year. Six of his 32 carries, for example, went for 10 or more yards, which is a healthy percentage, and shows off a surprising explosiveness that he also exhibited in college.

We certainly do not know just yet what the future holds for the young running back as he heads into his second season, though it likely will include a lot of watching from the sidelines as Le’Veon Bell hardly comes off the field, assuming that the veteran is re-signed, of course, which is the stated intention.

Still, he is working on doing everything in his power to give his coaches reason enough to trust him in all aspects of the game, which he hopes will lead to him getting more opportunities to play. Specifically, he told Missi Matthews in a recent interview that he wants to work on his contributions to the passing game.

Increasingly, there is a focus on, or at least a desire for, running backs who are skilled not just in running the ball, but also in contributing as pass-catchers, and ideally as blockers as well. While Bell is the poster child for this generation’s do-everything back, others like David Johnson, Todd Gurley, and rookie Alvin Kamara show that he is not a one-off model.

Conner knows that the key to more playing time is demonstrating that he can do more. One of the most significant hindrances to playing time, which former offensive coordinator Todd Haley mentioned at one point, was the fact that he struggled in pass protection, most notably in the regular season game against the Jacksonville Jaguars.

“It’s what I was asked to do”, he told Matthews about his pass-protection assignments. “It’s not an excuse. I have to get better at that. Every running back loves running that ball. It’s what you do when the ball is out of your hands that also counts”.

Conner need not look further than his own teammate in Bell as a role model for learning how to become a complete back. No other player at his position in the NFL stays on the field for a higher percentage of snaps, nor contributes so extensively to all phases of his responsibilities.