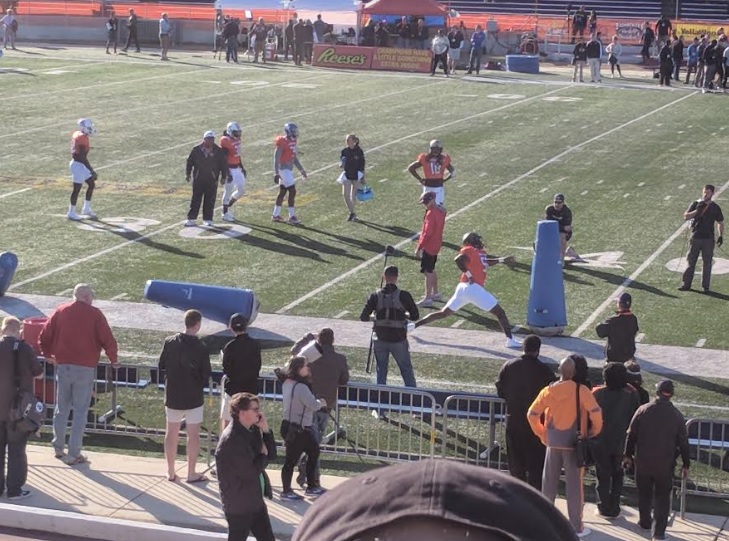 Senior Bowl week is over and the only thing left on the agenda is Saturday’s game. Really fun week of practice and two talented rosters. I know there’s been a lot to keep up with during the week so to put a cherry on the week, my winners and losers from the week, position-by-position.

– Not many to choose from this week. Baker Mayfield was the best QB here with an excellent Wednesday practice and a solid day on Thursday. Took care of the ball, I’m not sure if he threw a pick in team drills, brought energy, and flashed arm strength and accuracy downfield. And I thought he did a nice job on his full field reads and going through his progressions.

Sure, some will question his size. And his footwork can get clunky dropping from center and there might be a hitch in his windup. But on the whole, he had a solid week down here, and that was after arriving late and trying to catch up to an already hectic situation.

Josh Allen ended the week on a high note and flashed a couple throws throughout the week. This one was excellent from yesterday.

One of Josh Allen's best throws of the week. Tight window, on the money to Cedrick Wilson. pic.twitter.com/MzsYiFPoMD

And early in the week, he side stepped the rush and hit DaeSean Hamilton deep down the left sideline. You can see why there’s hype. But there were plenty of mistakes too so it’s hard to call him an outright “winner.”

– Backs are always tough to judge when there’s very little contact throughout the week. Arizona State’s Kallen Ballage definitely proved himself as a receiver and as a runner, he has a unique build. Rashaad Penny is the biggest “name” down here but I didn’t see a lot out of him. Not that that is a criticism, maybe I missed it, but he does have to keep his eye level up in pass protection. I’ve praised Darrel Williams’ hands and he’s continued to display his vision and downhill demeanor.

At fullback, Oklahoma’s Dimitri Flowers has showed off his versatility, performing well as a lead blocker and out of the backfield. For the position, very good hands and ability to create space.

– Mike Gesicki ended the week really well. Underrated blocker and creates space at the top of his route with the size to box out smaller safeties. Troy Fumagalli was steady, as expected, and Durham Smythe wasn’t flashy but displayed good hands and ability to make tough grabs vs man coverage.

– James Washington from Oklahoma State was arguably the best and most consistent, showing himself well as a vertical threat and making tough adjustments to the ball in the air. Body control is high level. D.J. Chark may drop a couple but he’s a fluid route runner who changes direction without any loss speed and can find the ball in the air. DaeSean Hamilton is a similar story but even more impressive with the nuances in his route running and ability to change direction. One of the top players of the week.

Michael Gallup has great acceleration and a big catch radius. Tough and willing to go over the middle of the field. Strong start to the week, faded a little bit, but still impressive overall. And Penn’s Justin Watson made some highlight reel grabs, a good place to start for a small school prospect.

– Alex Cappa has been the talk of the week and with good reason. I’m still not sure how he’s going to hold up in pass protection, he struggled more there than what I think is being written, but the aggressive, play-to-the-whistle mentality he showed in college translated here. He’s not technically unsound either. Not a waist bender, hand placement is correct, and (generally) keeps his feet driving.

– Couple of interior guys who are country strong: Georgia’s Isaiah Wynn and Nevada’s Austin Corbett. More impressive with Wynn because it was reported he played through the week with a torn labrum (he won’t be in Saturday’s game). Good initial punch, ability to keep his base while he slides and mirrors, and even when he’s beat, is able to maintain his foundation and recover. Corbett has incredible grip strength and is nearly impossible to bull rush. They played him at guard, center, and right tackle. And he’ll finish his blocks too. It’s not just Cappa. Watched him toss Poona Ford out of the club Thursday on one down block.

– Will Hernandez, the biggest dude here, also had a good week. Better in space than you’d expect but the nasty attitude you do. He’s still gotta play in a man blocking scheme that can get him going vertical, not horizontal, but drop some weight on him and he’ll be a well-rounded guard.

– Virginia’s Andrew Brown has good tools. Quick first step who can disrupt and get into the backfield. Active hands that do need some refinement with his placement. Vision on the ball in the run game and the ability to work off blocks when his hands are inside. You can see the potential.

– Justin Jones really stood out. As I’ve written throughout the week, he’s got violence on his punch and creates a good bull rush with his big lower half to generate power from the ground up. Better athlete than you’d expect and works hard to disengage as a pass rusher with impressive success. Like him as a 3T at the next level.

– Ogbo Okoronkwo has a great first step and with his lack of height, has an effective rip move from either the edge or as an inside counter. Got the ‘ol James Harrison rip-down by Brian O’Neill on one rep yesterday. Question is if his frame can hold up on the edge.

– Garrett Dooley was one of my favorite pass rushers down here. Not flashy but does everything well. Talked about his pass rush plan, his active hand use, ability to string together multiple moves in a rush. Physical enough to set the edge and comfortable dropping into coverage. Only played OLB for a couple of years so he’s still learning and developing.

– Both Ohio State guys looked good and I want to go back and take a closer look: Tyquan Lewis and Jalyn Holmes. Couple of high energy athletes who can pass rush.

– Honestly, no one who truly stuck out. Not a total surprise because this was considered to be a weak class. A lot of guys did good things in limited areas: Fred Warner’s athleticism, Nick DeLuca’s block shedding, but no one was consistent enough throughout the week. Couple of injuries hindered an already thin group. Micah Kiser left with a knee, Dorian O’Daniel with a rib.

– More impressive group than how things looked at the beginning of the week. Isaac Yiadom was one of my favorite guys coming into the week and ended that way. His vert, timing, length to high point the football all on display in Mobile. Michael Joseph will take his lumps but the moment wasn’t too big for a D3 kid. Like his tenacity and ability to play the pocket. Taron Johnson has upside in a man-heavy scheme and while I didn’t love Duke Dawson on tape, he had a pretty good two practices down here (missed first day with illness). M.J. Stewart was as solid as anyone, too.

– Again, another impressive group. Trayvon Henderson my favorite of the week. Instincts, man coverage ability, physicality. Checks all the boxes. Kyzir White’s future is a little undefined and he’s a bit stiff-hipped because he’s a high-cut type but plays the ball well. Armani Watts was the most athletic safety here and fills the alley with authority.

– Not many on the South side stuck out. Mike White might’ve been the best guy there and he’s probably going to be a late Day Three type. Tanner Lee was incredibly erratic. Flashed a big arm but his footwork wasn’t great and he forced too many throws. One pick in 7v7 was right to the linebacker. When it got ugly, it got really ugly for him.

– Again, hard position to evaluate. Ito Smith can be a threat in space but his lack of size is going to be an obvious problem at the next level. Don’t know where and how he fits.

– Allen Lazard did well on Thursday but he’s too slow and is still working on his hand use to beat man coverage. Separation going to be an issue for him. Jaleel Scott had too many drops and had even more separation problems than Lazard.

– Maybe I just missed it but Ian Thomas felt really quiet this week. Tyler Conklin isn’t explosive in his cuts and his routes are way too easy for defensive backs to read. Still bummed Dallas Godert had to bow out of the first practice 20 minutes in.

– Guards Cole Madison and Sean Welsh had trouble dropping their weight and anchoring against bull rushes. Wasn’t impressed with Austin Golson from Auburn and Scott Quessenberry wasn’t terrible but too inconsistent. Struggles to get his feet in position to climb to the second level.

– Da’Shawn Hand played better later in the week but wasn’t quite as good as he was billed to be. Struggled too much in one-on-ones and has to get stronger at the point of attack. I was hoping for a little more out of NT Poona Ford, too.

– Marcus Davenport’s Thursday practice was his best showing but that wasn’t the week a supposed Top 15 selection was supposed to have. Too hot and cold, pad level rises on contact, and placement on his punch is all over the place. Some reps made him look like a first rounder; others had him as a UDFA. Ole Miss’ Marquis Haynes can look pretty and win clean but he has no power. Even when he drives his lower half on his bull rush and plays with proper technique, he can’t walk tackles back. Joseph Noteboom anchored him no problem in one rush Thursday.

– Brown’s Dewey Jarvis struggled in coverage and I didn’t see much from him around the edge. Wound up playing some inside linebacker and that might be his best spot in the NFL, though he’s a late Day Three candidate – at best.

– Mike McCray made a couple of good plays in the run game but his lack of athleticism flipping his hips and running is going to limit him big time in today’s NFL. I thought I’d see a little more. Darius Leonard didn’t do much to standout either.

– I’m not sure about the first two practices but Levi Wallace had a really rough Day Three. D’montre Wade, not much doing there either. Siran Neal has to play much cleaner if he wants to sniff the field in the NFL. Penalty flag waiting to happen.

– Marcus Allen wasn’t quite what I expected. Didn’t do a great job in coverage and I wanted to see him make some splash. That didn’t happen. Jeremy Reaves was ultra-quiet and Tray Matthews didn’t seem to do much either.