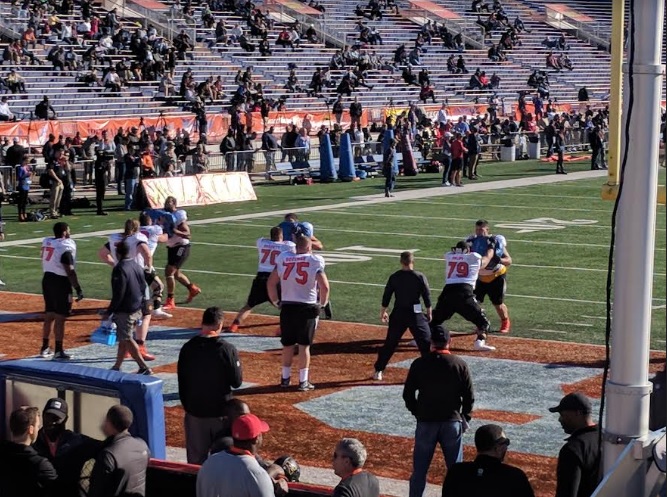 Wild first day at the Senior Bowl. Tuesday is always the busiest day of the year. 7:30 AM weigh-ins. 11 AM kicked off media day. And then back-to-back practices from 1:30 to 5 PM. As of me writing this, my diet today has been a Krispy Kreme donut and concession stand hot dog.

So much to write about. Don’t want to delay. Let’s jump in.

Over the couple of years I’ve been here, I’ve learned not to freak out about the “weigh-in” winners. Especially trying to describe their body type; most just end up falling on the cliches of “sloppy” or “looks great.” The stuff you can learn from these things, you probably need a kinesology major for. But the information is part of the puzzle and all is worth mentioning.

– Alex Cappa, the OT from Humboldt State (who had a very good day) may seem light at 299 but he’s still a mountain of a man. Maybe it’s the long hair.

– TE Dallas Goedert surprised many by coming in at 260 pounds. But that’s a good thing. Athlete with the size to stay in-line and block. Over 10 inch mitts. He had a strong debut, which we’ll get into later.

– I like Dorian O’Daniel’s tape but he actually weighed in lighter than listed. 215 compared to 220. I was hoping he’d add a little bit. If he wants to stay at LB in the NFL, he’ll have to.

– South Alabama corner/safety Jeremy Reaves might have set a Senior Bowl record for smallest hands. 7 3/8 inches. It’s certainly not the end-all but that’s an outlier, for sure.

– James Washington, the WR from Oklahoma State, was listed on his school’s site at 6’1. His real weight? A hair under 5’11. Why you can’t always trust the school’s numbers.

We’ll talk about it later but they look like similar players.

– UTEP’s Will Hernandez is the heaviest player here, weighing in at 340 pounds. And by a wide margin, too. Next closest is Maine’s Jamil Demby, a full 17 pounds lighter.

– For those who put a high degree of importance on it, all the QBs passed the dreaded hand size test (of 9+ inches). Mason Rudolph and Brandon Silver have the smallest at 9 1/8. Baker Mayfield will officially weigh in tomorrow. That’s typically announced at the start of practice.

– Ogbonnia Okoronkwo is another interesting build. Only 6’1 243 pounds. He’ll make the transition to OLB. Could (and probably should) be on the Steelers’ radar.

– Fort Hayes State’s Nathan Shepherd seemed very happy about weighing in at 310 pounds. Loudly clapped twice to himself as he walked off stage. Ethan Young of NFL NextGenStats told me he played around 290 in college. So getting to 310 is big for his jump to the NFL.

Couple of Steelers notes. Obviously, coaching staff is not here this week. They’re going to be at the Pro Bowl. But the scouting staff is here in full force. Set up shop in the bleachers – as they usually do – for the weigh-ins. And then way up high on the visitor side for practice. The less you notice them, the happier they are. By my count, about ten Steelers’ representatives in attendance, including a couple faces I didn’t recognize. Here are the ones I did.

I’ll work on trying to figure out the rest. One of them might have been Brandon Hunt, head of pro scouting, but I’m not 100% sure. He’s been here in the past though so it wouldn’t be a surprise. Kriedler recorded punter hangtimes with his stopwatch.

Let’s jump into practice notes. Keep in mind it is the first day, a very long one for the players at that, and today is an installation today. Tomorrow and Thursday better indicators of where players ability. And you always look for who continues to do well or the ones able to turn things around after a bad beginning.

– Spent a lot of time looking at the TEs/inside linebackers/safeties in one-on-ones. Like I referenced earlier, South Dakota State’s Dallas Goedert looked like he belonged. On his first rep, he burst away from Dorian O’Daniel on a post and then adjusted to the pass that was thrown behind. On another, he punched with his outside hand into ILB’s Darius Leonard’s shoulder, bumping him out of the way, then exploded upfield to make the catch down the seam, Leonard trailing by a good yard.

– UCF TE Jordan Atkins is a guy I think I need to go check out. Like his size and makeup. Is double-catching the ball too often but he’s a good athlete who can create space at the top of the route.

– I have Virginia S Quin Blanding down for just two reps, and one was a speed out he had no chance of stopping, but the other rep was an impressive one. Drove on Adam Breneman’s dig to break it up. He’s gotta prove he can move in space and cover. Tackling isn’t the concern; everything else is.

– I didn’t pay a ton of attention to the offensive linemen but Nevada’s Austin Corbett – a late add – has impressive grip strength in one-on-ones. Completely stuffed Utah’s Kylie Fitts on one rep.

– Couple of notes who was starting for the South Team defense, though really, it doesn’t mean much. Had Shaquem Griffin and Uchenna Nwosu at OLB, Micah Kiser and Darius Leonard inside, with Tray Matthews and Blanding at safety.

– Some of the players getting used to what NFL coaches demand. Big thing is finishing reps. Running to the ball. Running to the end zone. After one short run, San Diego State’s Rashaad Penny jogged to the five and then began to turn around, assuming that was a good enough finish.

“Nu uh! Nu uh!” a coach shouted out to him. Penny turned back, jogged the rest of the way over the goal line, and then finally worked his way back to the huddle.

– Maybe the most impressive linebacker of the day was Auburn’s Tre’ Williams. There are questions about his athleticism and ability to play on all three downs but there’s no question he can hit and play the run. Early in the practice, he scraped over the guard to fill against the run. The other was the play of the day. Huge smack in the B gap to jar the ball out of Penny’s hand. Williams recovered it.

– O’Daniel continues to show his impressive athleticism. Darrel Williams tried to hit the corner on an outside zone and O’Daniel easily cut him off for the wrap up. Definitely a sideline-to-sideline guy. Question is if he can anchor on the interior when guards and centers climb to him.

– Penny and cornerback M.J. Stewart got some kick return work in.

– Sloppy at the end of practice. Quarterback/center exchange, handoffs to the back, working under center in general, caused a lot of problems. Four fumbles int he final 18 play team session, including three of the final four. Wasted plays, which is unfortunate when you only get a couple days of work.

– From what other friends saw, Humboldt State OT Alex Cappa had an as-advertised type of day. Physical, finished blocks, played to the whistle. And Stewart, the corner, was impressive in one-on-ones. Like his versatility. Supports the run, good tackler, blitzed a ton from the boundary, something the Steelers began to do this year.

– Spent a lot of time watching the CB/WR one-on-ones. Couple of thoughts.

– Penn State’s DeaSean Hamilton got the call-up from the Shrine Game and you can see why. Quick, fluid player. Doesn’t lose any speed out of his breaks and can sell vertically, quickly chopping down and gets his head around on time. Coaches were telling him to make sure he stacks (gets on top) the cornerback on anything vertical. Had a step once on South Carolina’s JaMarcus King but couldn’t make the catch.

– Two receivers who didn’t do very well: New Mexico State’s Jaleel Scott and Iowa State’s Allen Lazard. Two official drops by my count and another thrown low that was tough to make but definitely catchable. Lazard was a little more successful but had trouble getting separation and beating press coverage at the LOS. Their big frames give corners a lot of surface area to target.

I haven’t seen much of Scott but liked Lazard on tape. We’ll see if he gets better tomorrow.

– Few have ever heard of him but Division Three corner Michael Joseph (Dubuque) does a great job of finding the football and attacking it at the catch point. Two breakups in one-on-ones. One, a slant to Cedrick Wilson Jr and another, high pointing a go ball to Penn’s Justin Watson. He just has to make sure he gets his hips open in time – Michael Gallup burned him in tight man coverage downfield. Would’ve been a TD had the ball not been underthrown and clanked off Joseph’s left shoulder as he desperately tried to catch up.

– Speaking of Gallup. Speed and a nice catch radius. Snag over his head on a zip by Baker Mayfield over the middle in team drills.

– Back to Kallen Ballage. Nice hands out of the backfield. Makes catches away from his body and quick to the tuck. To be fair, it was LB/RB one-on-ones, a clear advantage for the offense, but he broke the ankles of The Citadel’s Myles Pierce on an angle route to the inside. Pierce fell over at the break point and Ballage had an easy catch. Showed patience and burst as a runner too, which will bring on those Bell comparisons.

– One of Kyzir White’s best trait is being able to play the ball. Couple of those plays on display today.

– Baker Mayfield settled in late in practice. Still catching up after a family emergency kept him out of Mobile until today. Hit Scott and Gallup on posts against man coverage.

– You probably already saw it today. QB Josh Allen has some heat on the ball. Lead to drops on checkdowns by unexpected running backs.

– One throw he made had the scouts behind me go “oooh.” And it was “ooh” worthy. Side stepped the pressure to his right, reset his feet, and hit Hamilton on a deep out route along the left sideline.

– Nebraska QB Tanner Lee was very up and down. Started things off with a beautiful downfield throw on a post/wheel, hitting the wheel. The next play? Forced throw into traffic, over the receiver’s head, and picked by White.

– It wasn’t a particularly hard hit but safety Marcus Allen came down into the alley to knock the ball out of Akrum Wadley’s hand. North practice not as sloppy as the South but Mayfield fumbled one exchange with Scott Quessenberry from under center.

– Tough day for WR Braxton Berrios. Not everything was his fault but couldn’t connect on a pass. Lack of size/catch radius hurts him.