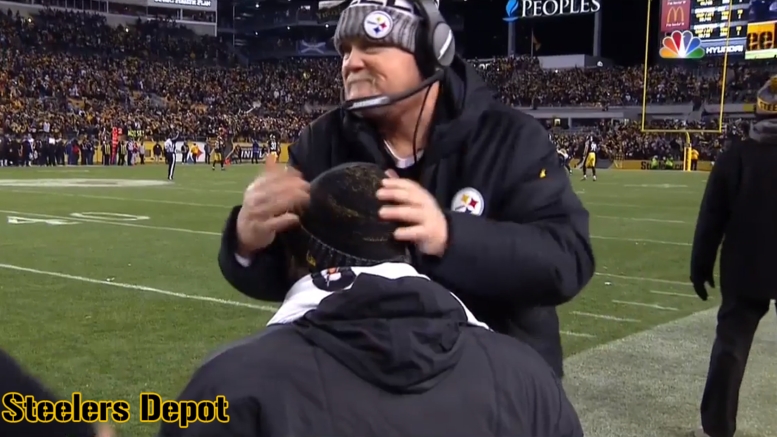 A little over a week ago, Jason La Canfora of CBS Sports reported that Pittsburgh Steelers quarterback Ben Roethlisberger had approached head coach Mike Tomlin about a month ago and requested to have a buffer between him and offensive coordinator Todd Haley on the sidelines during games. That buffer was of course quarterbacks coach Randy Fichtner, who had spent most of the regular season upstairs in the coaching box during games. On Tuesday, Roethlisberger was asked if that report was true during his weekly interview on 93.7 The Fan.

“Yeah, I would say so,” Roethlisberger said. “Randy’s usually up in the box and has been until I think the Indianapolis game was about the first game that he came down. And when you come to the sideline, I mean, that’s a guy, the quarterback coach, you’re in meetings with every day, all day, at practice together, him and the backup quarterbacks, right. You guys are always together, so you guys know each other the best. You communicate the best with each other, you learn things. I mean, everyone knows that Charlie [Batch] and I were together so long, we communicated really easy. It was easier to come to the sideline, whether it was with Bruce Arians or Todd [Haley], or Randy, I mean any coach – and you can kind of talk with a guy that you’re with all the time, right. You know each other very well.”

Roethlisberger continued on with his explanation of why he asked for Fichtner to be down on the sidelines with him during games.

“So, to have that communication with a quarterback coach that I’ve been with for a long time, and the quarterbacks now, to come to the sideline when Randy’s up in the box, I can talk to the quarterbacks that I know really well and that I’m with all the time,” Roethlisberger said.” In order to go talk to Randy I’d have to go grab a phone, or grab someone’s’ headset, or whatever. So, we all kind of made the decision that let’s bring him down so that there’s constant lines of communication. I can go talk to him all the time, we can all communicate. It’s basically like having a quarterback meeting when all of us are there on the sideline and it just has made it easier in a sense that we’re always together. We know each other so well and so we can open the lines of communication for everybody easier.”

So, does Roethlisberger feel now that having Fichtner back on the sideline again has helped him play better?

“I think so,” Roethlisberger said. “Since that game I’ve been playing pretty well. I will give all the credit to Randy, how about that, but it does help to have him down there and those communications that we have.”

Being that the current speculation from La Canfora and others is that Roethlisberger’s relationship with Haley isn’t currently a good one, the quarterback was asked Tuesday during his interview whether or not those assumptions are false.

“Yeah, it has nothing to do with the relationship that Coach Todd and I have,” Roethlisberger said. “It’s more about making it easier to communicate with my quarterback coach, you know.”

Roethlisberger was then asked pointblank if his relationship with Haley is still good.

In case you haven’t heard by now, Haley’s current contract with the Steelers is reportedly set to expire after this season. So, will Haley have his contract renewed should Roethlisberger ultimately decide he wants to continue his career? It’s hard to say for sure, but personally, I would bet that if Roethlisberger does decide to return for another season that Haley won’t be retained. If that’s ultimately what happens, odds would then be pretty good that Fichtner would take over as the team’s offensive coordinator.

It goes without saying that regardless of what ultimately happens during the playoffs with the Steelers that Haley being back in Pittsburgh next season is far from guaranteed to happen.

Haley, by the way, was reportedly injured in a fall Sunday night after the game against the Cleveland Browns. He was not at the Steelers facility on Tuesday because of that and the team says he will return this week, according to Ed Bouchette of the Pittsburgh-Post Gazette on Twitter.