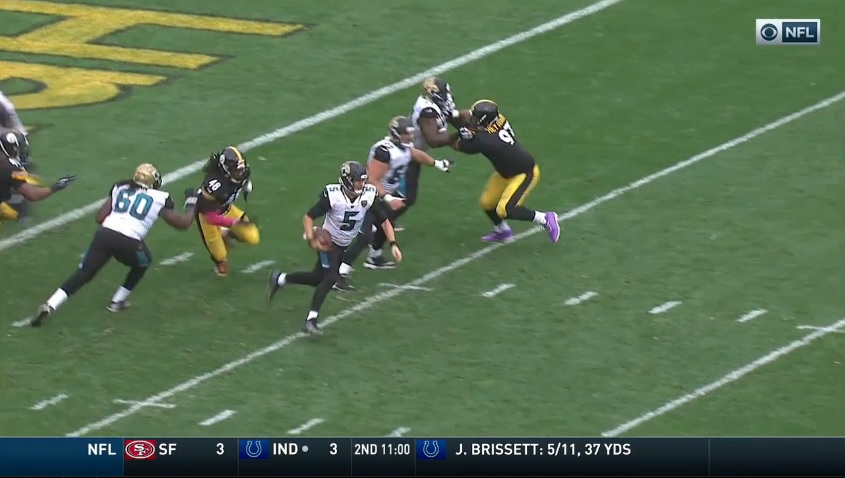 Blake Bortles’ arm shouldn’t scare you. But his legs? Yeah, he can do some damage. The Buffalo Bills found out the hard way in Sunday’s Wild Card matchup where Bortles became one of the rare QBs in playoff history to have more yards rushing (88) than he did passing (87). Not letting him break the pocket is high on Mike Tomlin and the Pittsburgh Steelers’ list for Sunday afternoon’s tilt.

For as bad as Bortles was with his arm, and it was bad, he helped win the game with his legs.

With Jacksonville down 3-0 and 40 seconds to go before the half, Bortles scrambled twice for 32 yards, gains of 12 and 20, to get them in field goal range and tie things up going into the break. On their lone scoring drive, a 15 play march, he scrambled three more times, including a ten yard pickup on 2nd and 9 to get into the red zone. And he used his legs late in the fourth quarter after a botched snap threatened to nail the Jags for a big loss; instead, he peeled off down the left side for a 26 yard rumble.

All told, he averaged 8.8 yards per carry and rushed for more than either running back, LeSean McCoy and Leonard Fournette.

After the game, he told reporters he wanted to run the ball more against the Bills after regretting not doing so in the Week 17 finale. So expect that trend to continue, if it’s made available, versus the Steelers. Bortles didn’t run the ball often in the Week 5 matchup, carrying it only once, but it was a key one. A 3rd and nine scramble from his own nine yard line to keep the drive alive. They didn’t get points out of it but flipped the field. Pittsburgh started their next drive at their own five yard line.

Pittsburgh’s rush lane integrity hasn’t always been up to par throughout the year.It certainly wasn’t in the finale against the Cleveland Browns, though players have said that was simply guys chasing the sack record. Maintaining their gap and not giving Bortles an escape lane is going to be key. Force him to beat you with his arm, not his legs. Because Bortles hasn’t proven he can do the former.