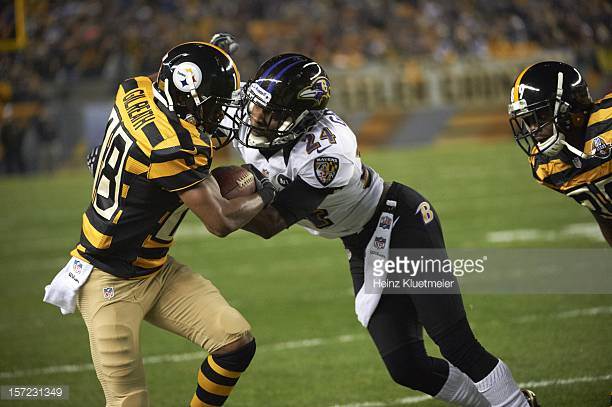 Bringing you another Pittsburgh Steelers’ interview courtesy of our good friend Ron Lippock of the Pittsburgh Sports Daily Bulletin. Today, Ron chats with David Gilreath. former Steelers’ receiver who spent the 2012 season with the team. They discuss what it was like to play in Pittsburgh, finding his footing after his career, and discovering which guy was Kevin Colbert.

First, since your retirement from the NFL you’ve done some interesting things in terms of work and travel. Tell us a bit about those?

Well starting from the beginning…it was a journey since my time in the NFL. It took time to figure out what I wanted to do.

I took a couple of years after the NFL and traveled the world.  I went to 28 different countries so far. During that time I had a good friend who ran a jewelry distribution company and I partnered with him. I’ve been learning that business for a year-and-a-half now.

I’m living in California though for the past couple of months I was living in Hong Kong where the factory was based, learning the different parts of the manufacturing and distribution business.

What have been some of the biggest things you’ve learned from your time traveling?

The main thing is the cultural differences. We do things in the USA that are a lot different than other places. The food, religion… our way of life. There’s no right or wrong way.

How hard was the post-NFL adjustment for you? Some players are unprepared and some have things lined up before they retire. You?

I was somewhere in between. I left the game on my own terms, but I found it hard to make the adjustment. We’re pampered in the NFL and in college. Just things like resume writing and conducting formal interviews we’re not used too.

I found my passion quickly. Lots of guys don’t know where to go after the NFL, so that helped me.

You played for a number of teams prior over your career and before you joined the Steelers. How did you manage that stress of continually vying to make a roster?

It’s tough for a guy in my position. I wasn’t drafted. It’s hard not knowing where you’ll be every day. What team you’ll be on or what city you’ll be in. I was fighting and clawing every day. But I enjoyed going from city to city and being a part of different organizations. Some good and some not so good – both ends of the spectrum.

If you’re not a first round draft pick – a freak like Calvin Johnson – you’re not promised a roster spot. So I just enjoyed the journey.

But you found yourself in Pittsburgh. How did that happen?

I had a good rookie preseason after the lockout in Indianapolis. I was on the practice squad but when they cleared out the staff in Indianapolis I was let go as well.

I was brought in to workout in Pittsburgh afterwards. Tomlin was evidently at my Pro Day at Wisconsin and told people to keep an eye on me, so I heard. He had his eye on me and was there at the tryout.

Who took you under their wing in Pittsburgh and “showed you the ropes”?

Nobody really showed me. I watched Antonio Brown and Emmanuel Sanders. Watched Brown run ghost routes after practice by himself.  The wide receivers coach Scottie Montgomery and Coach Haley believed in me. Haley said he reminded me of guys that used to play for him. So I just watched other guys that led by example.

Any good stories of your time there in Pittsburgh?

One story I remember well was about Troy Polamalu in training camp. There was a big fight between the wide receivers and defensive backs. A big brawl. As everyone was fighting I heard this real quiet voice behind me saying “Scotty – nobody’s safe Scotty…” just in this real quiet voice in the middle of the brawl…I still laugh thinking about that.

And then the next play Troy flies in and hits the running back and knocks him out. That’s when I knew he was the real deal.

I also remember the ping pong battles. I remember seeing Ben Roethlisberger there – he didn’t speak to the younger guys much then. I had beaten a couple of guys – Sanders was up and Ben stepped in and told Sanders to slide down and let him play me. He put a whipping on me. That’s when I learned Ben wasn’t just a legend on the football field! I probably shouldn’t tell that story as I thought I was the ping pong legend!

Any advice for younger guys entering the game today?

Well NFL players get there for a reason so they don’t need much advice from me. I’d just say take advantage of the opportunities the NFL provides. Take advantage of the cities you are in. If you’re in Seattle go shake hands with the people at Microsoft. If you’re in L.A. talk to folks in the entertainment business. I’m not sure what the example would be in Pittsburgh but go do that if you’re there. My advice is to take advantage of your ability to do that networking. In my experience it’s more about who you know than what you know these days.

I still want people to know I was the greatest ping pong player! I remember Colbert was always in the locker room playing pool.  I didn’t know who he was and always wondered who that old white guy was in the locker room! Then {tight end} Jamie McCoy told me it was the general manager – the one responsible for my paycheck. I’d only been there for a couple of months. I was like “Oh shit!”. Seeing those guys – Colbert, Tomlin and the owners so hands-on. They treated us like human beings, and that wasn’t the case on every team.