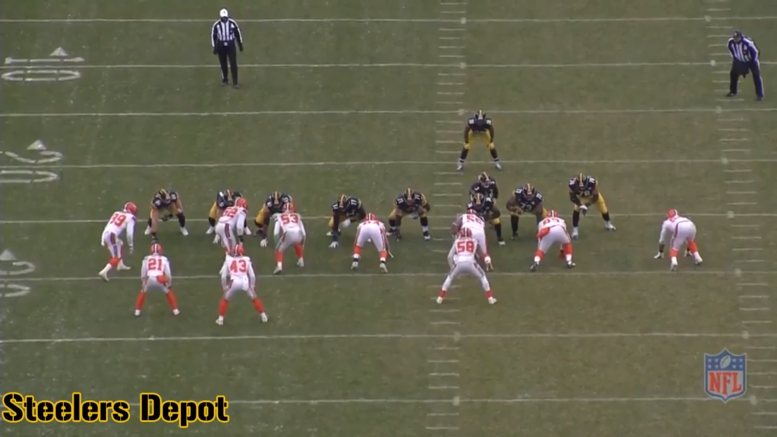 While I wouldn’t necessarily categorize the Pittsburgh Steelers as one of the more creative offenses in the league, they do employ more varied sets than many might expect, and that extends to using players in unconventional ways—most recently, wide receivers in tight end roles, primarily enabled by the acquisition of JuJu Smith-Schuster.

But one package that we do not see often, and did not this season, was the 13 grouping, which defines three tight ends on the field, paired with one running back and one wide receiver. While this is never a popular group in today’s NFL, injuries this year have made it even more difficult to use.

But they did use it a lot in the season finale against the Browns, and I wanted to take a look at how that fared. Paired with Jesse James and Vance McDonald here was Jerald Hawkins, a backup offensive lineman, rather than Xavier Grimble, the actual third tight end.

It was not the most auspicious of starts. They lost four yards the first time that they tried to run it. With James, Hawkins, and McDonald all to the right side, it was missed blocks by the former two that saw to Stevan Ridley turfing it well within the backfield.

But, undaunted, they continued to use it sporadically and situationally throughout the game, and got the four yards back on first and goal from the four. Though the run went up the middle, notice how much of the defense was occupied by the bodies to the right. Seven defenders were to the offensive right of the center. One was far to the left in coverage on Smith-Schuster.

Later, toward the end of the first half, the Steelers were backed up in their own end when Landry Jones launched a deep pass for Smith-Schuster, connecting for 46 yards. James flagged out laterally while Hawkins stayed in to block. McDonald stressed the seam to hold the safety, leaving the receiver one on one.

Into the fourth quarter, a run was stopped for no gain. The scheme left Christian Kirksey unaccounted for, Ramon Foster discovering that late, and essentially ended up blocking Ridley’s path with no escape.

But the personnel grouping was also responsible for the game-sealing run with 1:42 to play. On second and nine, the tight ends all bunched to the play side, with James and Hawkins downblocking and McDonald providing a second-level seal on the safety. Throw in a pulling guard and you get a 15-yard run.

After that, the Steelers are able to run out the clock to seal their 13-3 record and the Browns’ 0-16. Considering this particular personnel grouping hadn’t even been on the field before, I think it would be fair to describe their results as finding mixed success.