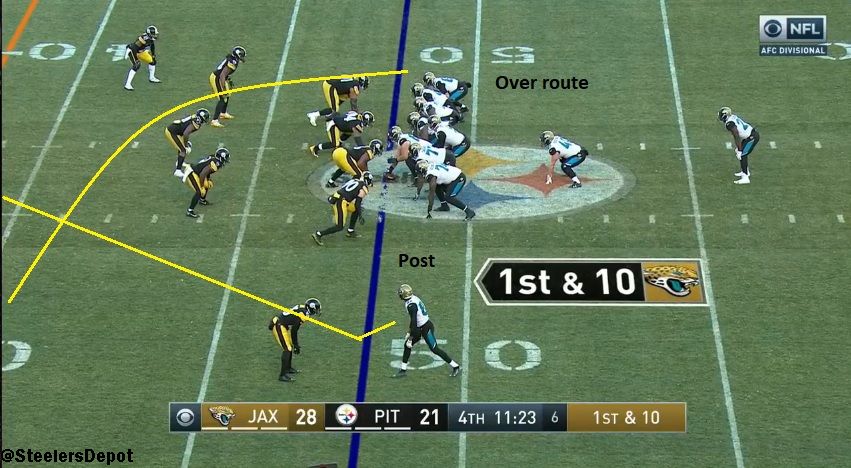 There was still time. More than 11 minutes left, the Jacksonville Jaguars leading by just one score and the Pittsburgh Steelers mounting a furious comeback. Get a stop, get the ball, get the game tied up.

That was the plan. Until it wasn’t. Thanks to the Jaguars one big pass play in the air of the day, a 45 yard completion to Keelan Cole down to the Steelers three. Leonard Fournette scored on the next play, the Jags went up 35-21 and the Steelers never got the ball back down one score again.

We’re going to break down the play that for me, ended the Steelers season. It was a great design by the Jags, taking advantage of an adjustment Keith Butler had made.

To understand how this play developed, you have to understand what has killed them in the past, dating back to Dick LeBeau. Their three deep shell, a staple then, less common now, was susceptible to the Y over. The tight end, or wide receiver, running a deep crossing pattern while the receiver to the other side ran a clearout. It flooded the Steelers Cover 3 time and time again, leaving that over route wide open.

Of all teams, the Cleveland Browns seemed to hurt them on this the most. Jordan Cameron had a couple games catching nothing but those. Here’s an example from 2013. This is more spread out than what we’ll look at today but the effectiveness is all the same. Three deep and the over route isn’t covered well enough, the corner trailing the entire time. Simple leverage advantage.

Butler has tried to adjust it and over time, they’ve gotten better. From Week 17, I saw them really take it away. Same concept. #1 clearout, backside running the over against the Steelers three deep zone. 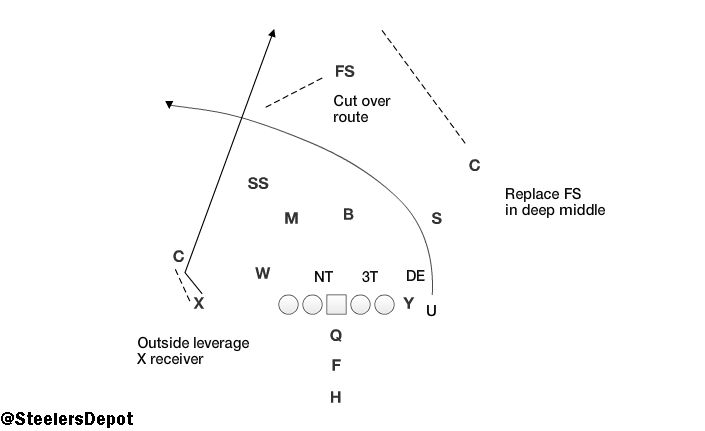 The free safety cuts and picks up the over route. He’s in better leverage to take it away. Corner has no chance, he’s trailing the entire time so he trades assignments with the FS. The CB is now responsible for the deep middle after passing off the route.

Think of it like an inverted Cover 3. And here, it works. Deshone Kizer throws the post but the pass is squeezed and incomplete.

The Jaguars definitely saw this, thorough in their homework and watching what could be considered (though I’d disagree) a meaningless regular season finale against a winless foe.

So to take their downfield shot, they did the exact same thing. From a heavier look to sell the threat of run. But the backside Y tight end is running an over, #1 receiver is running a post. The angles we get here aren’t great but good enough. We know what they’re running anyway – I don’t have to wait for the All-22 to come out to confirm.

And so the the Steelers defend it the same. The safety takes the crosser and the corner, Joe Haden, is now working to bracket #1 vertically. But he can’t get there in time and Artie Burns doesn’t play it well enough, giving Cole an uncontested catch, who high points the football. 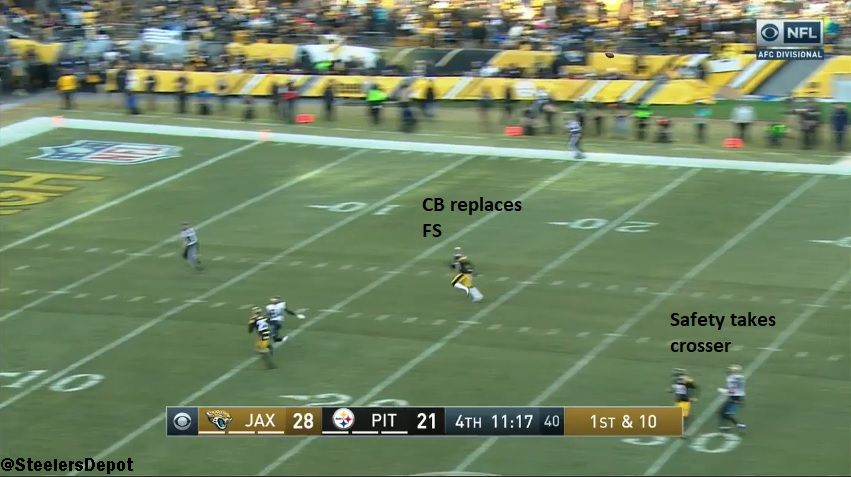 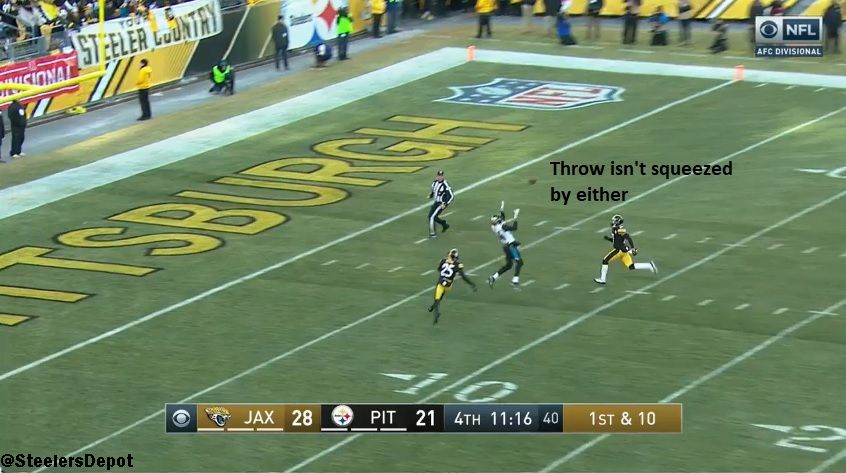 Two looks at it.

There’s a lot to be mad at in this game when it comes to the defense. This isn’t at the top because like I said, it’s an excellent job of adjusting to what the defense is going to take and finishing the play.

But it also highlights how Jacksonville won the game. Better scheme, better execution. All it takes to win a game, no matter how things stack up on paper.

The Steelers thought their problems with this concept was over. Now, they might be back to the drawing board. With the loss, there’s months to think about it.