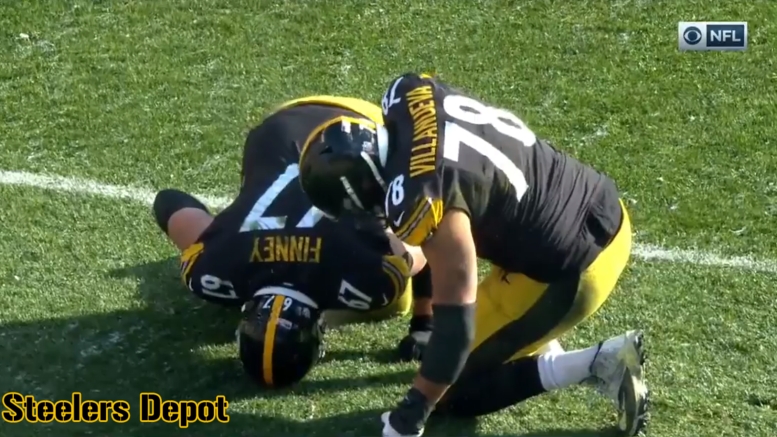 Following the Pittsburgh Steelers win over the Cleveland Browns in the final game of the regular season, back up center B.J. Finney was the only injured player mentioned by head coach Mike Tomlin in his post-game comments.  Finney was playing in place of starter Maurkice Pouncey, who was one the sidelines with several other key players that Tomlin chose to protect on the inactive list in Week 17.

While an injury to a backup might not seem like a big deal, this particular situation could have been a big problem for the Steelers.  Finney sits behind Pouncey on the depth chart.  If you were watching the game after Finney went out, you know that while Chris Hubbard has been terrific when he filled in for Marcus Gilbert at his natural position of offensive tackle, having Hubbard play center not a recipe for winning a playoff game.

We never did receive a lot of information about Finney’s injuries.  Tomlin referred to it as an ankle and a thigh injury.  During the bye last week, Tomlin said that Finney would have been listed as “questionable” if they had a game to play.  Fortunately, the week off gave Finney crucial time to recover.  At this week’s press conference, Tomlin stated that Finney had a chance to play in the Divisional round game.

The backup guard and center was listed as being a limited participant in practice On Wednesday.  While today’s report is not yet available, I think Finney will be ready to go this Sunday in the Divisional Round matchup with the Jacksonville Jaguars.  Here’s why:

BJ sustained some sort of ankle injury during the Steelers first drive.  As reported by Chase Williams at 1:11 pm, Finney was having his left ankle taped:

Finney returned for the next offensive series, and his ankle did not appear to be a problem.  Had that been his only injury, it probably would have been nothing more than a footnote following the game.

It’s always difficult to get injury intel on backup players.  They aren’t newsworthy on a national level, so information from “sources” isn’t available from Ian Rapoport or Adam Schefter.  But looking at the video, Finney did not take a direct hit to his right thigh.  You can see her that he lands with his weight on his right knee as he goes down, so it’s actually lucky that he didn’t sustain a patellar injury:

Finney most likely has a thigh contusion and has been getting treatment for almost two weeks now.  I doubt that this was anywhere near as serious as Antonio Brown’s calf injury.  He was able to walk off the field on his own and as far as I know, he remained at the stadium for the remainder of the game.

With all due respect to Chris Hubbard, who is obviously talented enough to be a starting tackle in this league, he is not the answer at center if Maurkice Pouncey can’t play.  And yes, Steelers fans, Fernando Velasco is available as a free agent but he last took a snap in the preseason of 2016.  If Coach Tomlin wasn’t confident that Finney would be available when the Steelers take on the Jaguars this Sunday, they would have brought players in during the bye week for workouts and interviews.  Since it appears that didn’t happen, I think we can assume that Tomlin is counting on Finney to be ready.

I will look for Finney to be a full participant in practice by Friday.  Assuming that’s the case, he will be healthy enough to serve if needed.  But let’s all hope he doesn’t need to do anything more than be available.