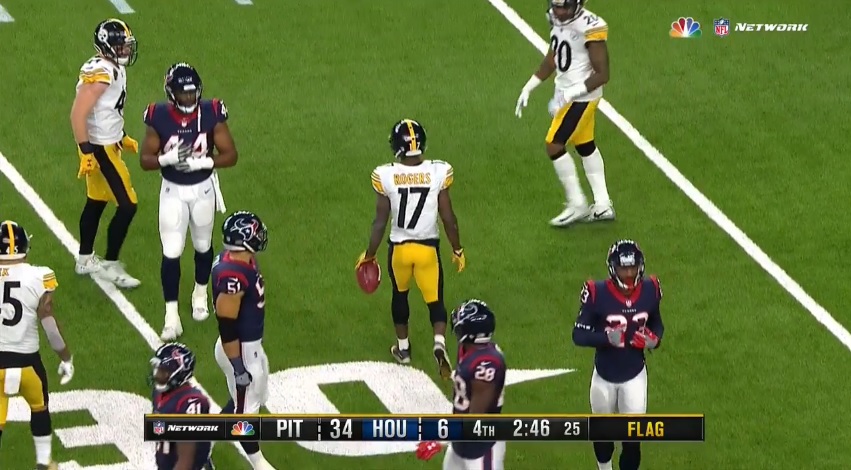 Eli Rogers sat squarely in the doghouse in Week Four. He was coming off a disaster against the Chicago Bears, flubbing his first punt return chance, in an ugly loss to a team the Pittsburgh Steelers were expected to beat. Rogers had already begun to lose snaps at receiver to JuJu Smith-Schuster, a trend that would only increase throughout the season.

But after Antonio Brown’s regular season ended, Rogers got a second chance. He’s made the most of it, being a productive, and most importantly, trustworthy punt returner. Sitting down with special teams coach Danny Smith, Bob Labriola asked him to evaluate Rogers.

“He’s quite capable of it,” Smith said in Steelers.com’s weekly Coordinator’s Corner. “He’s working hard at it. We’ll continue to bring him along.”

Decision-making ad ball security are the two most important elements and Smith said Rogers has been doing a good job in those areas.

But comfort? Smith doesn’t search for that.

“No, there ain’t no comfort zone. Every punt is a new play. As soon as you talk comfort with him, you get your butt in trouble.”

Rogers’ best performance came in Week 16 against the Houston Texans. He returned five of them for 82 yards, getting upfield and making people miss.

The return game gets heightened in the playoffs. The weather is bad, and it will be cold and windy Sunday at Heinz Field, increasing the chances of returns – and their difficulty.

We saw that in Wild Card weekend. Titans’ rookie Adoree’ Jackson muffed a punt hat turned the ball over. And the Rams in their loss, had trouble in the return game. Second-year man Pharoh Cooper couldn’t get rookie Blake Countess out of the way for a punt, creating one turnover, and Cooper fumbled away a kickoff.

That’s why I’m always hesitant to trust rookies for these jobs. Sometimes, they’re more dynamic but they can kill you when you need them most. For Rogers, he’s doing the right things.

Though Smith doesn’t look for any sort of comfort, there is probably comfort in keeping Brown – especially now, coming off a calf injury – off punt returns. The hype about risking injury has always been overblown but having another option is certainly a good thing.

Smith has stated in the past he has the fewest return options of any team in the league. And that’s probably still true. But at least the guys he does have are playing at a competent level.