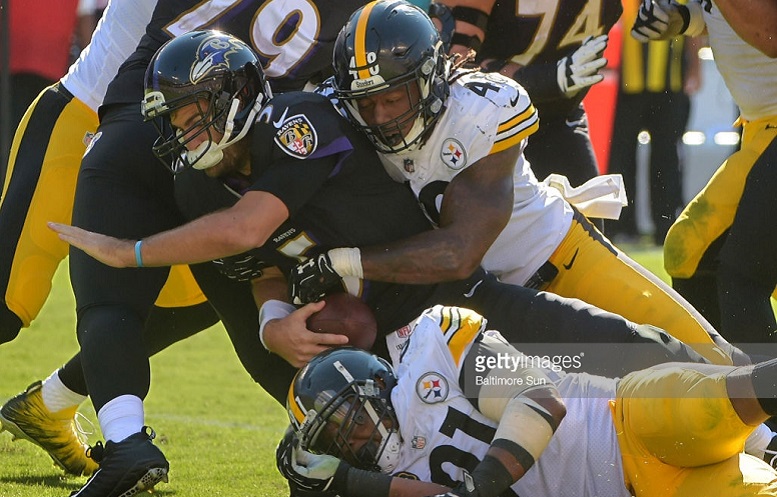 We’ll kick off this series of by looking at and contextualizing the 6 sacks that Steelers outside linebacker Bud Dupree registered during the 2017 season.

Toward the end of the first half of the Steelers game against the Minnesota Vikings, Dupree rushed off the left end and simply beat right tackle Mike Remmers around the end on his way to easily corralling deep-dropping quarterback Case Keenum. Remmers really never had a chance on this play thanks to the wide angle that Dupree had along with his well-timed get-off. This might have been Dupree’s best sack of the season and it was uncontested at that.

It’s not uncommon for good scheming and down and distance to play a large part in sacks happening. On this delayed stunt inside against the Baltimore Ravens in Week 4, tight end Ben Watson has no shot at following Dupree into the B gap and that results in the Steelers outside linebacker getting a free run up the middle at quarterback Joe Flacco on a 3rd and very long play in the fourth quarter.

Against the Cincinatti Bengals in Week 7, Dupree registered his third sack of the season and once again it came in the fourth quarter and on a 3rd and very long play. Additionally, Dupree’s sack of Bengals quarterback Andy Dalton once again came via an inside stunt complete with an excellent arm hook of the Cincinnati right guard by defensive end Tyson Alualu. Dupree benefits once again by getting a free run up the middle and after Dalton tries to bail to his right, the Steelers outside linebacker is able to secure his legs and take him down just outside the hash marks.

There really isn’t much to see on this Week 10 sack by Dupree against the Indianapolis Colts outside of two offensive lineman being confused as to which of them were responsible for blocking the Steelers outside linebacker. Dupree easily splits confused Colts right guard Kyle Kalis and right tackle Joe Haeg and after initially missing Indianapolis quarterback Jacoby Brissett on his first pass, the outside linebacker doubles back to get credit for the sack. Please note that once again this was a 3rd down and very long play.

Dupree’s fifth sack of the season came against the Bengals in Week 13 and was a classic coverage/effort sack. On this 3rd down play, the Steelers rushed just two players with Dupree being one of them. After being run up the arc by Bengals right tackle Andre Smith, Dupree works his way back to the pocket to find Dalton trying to escape thanks to him being unable to find an open receiver.

Dupree’s sixth and final sack of the 2017 session game in the fourth quarter of the Week 15 game against the New England Patriots and once again it’s more of a result of what his opposition failed to do than what he did. On this play, Dupree is chipped initially by Patriots tight end Rob Gronkowski and it appears as though New England right tackle Cameron Fleming wasn’t expecting that sort of help. Regardless, Fleming’s over set to the outside combined with Dupree’s quick step to the inside results in a free pass through the B gap for the Steelers outside linebacker. Dupree easily sacks turtleing Patriots quarterback Tom Brady, who is also sensing pressure up the middle from Steelers defensive end Cameron Heyward. Once again, this was a 3rd and long play.
.

Summary: As you should be able to clearly see, not a one of Dupree’s 6 sacks from the 2017 season was overly impressive and none of them constitutes him really winning a one-on-one matchup with a particular initial move or counter. Dupree’s athleticism did help a little on a few of these sacks as did the fact that most of them occurred on 3rd down and long situations. Zero high quality sacks from a former first-round draft pick in his third season is very hard to swallow. The Steelers must now decide this offseason if Dupree is worthy of having his fifth-year option picked up. It won’t be a huge surprise should they ultimately choose not to.