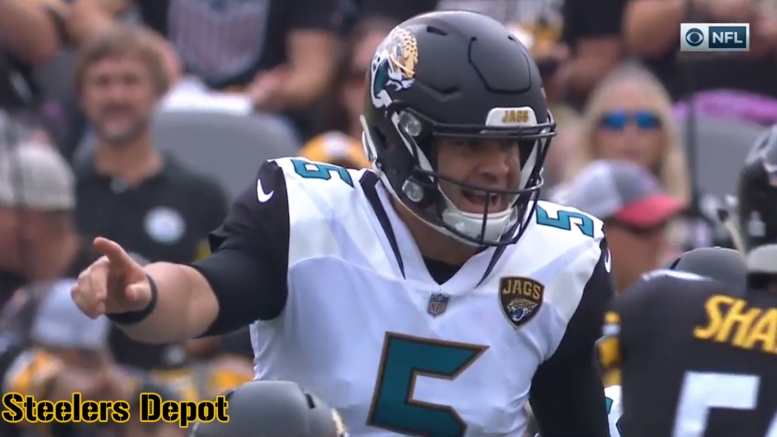 Blake Bortles knows that he is not regarded as the greatest player in the NFL, nor even particularly close to that distinction. It’s a criticism that he doesn’t shy away from, knowing that he still has quite a bit to prove, which a nice postseason run would not hurt.

The Jacksonville Jaguars’ quarterback is racing toward the conclusion of his fourth NFL season, after which the front office will have to determine if they want retain him on his already picked-up fifth-year option, which will come with a substantial price tag as a top-10 draft pick.

For the quarterback of a team that led his group to a division title, Bortles has been widely denounced, with some of the harshest criticism coming unsurprisingly from his division rivals. The Tennessee Titans, who along with the Jaguars remain active in the postseason, defeated Bortles twice this year, and Pro Bowl safety Kevin Byard came away unimpressed.

The Titans are preparing to face the New England Patriots in Foxboro, and Byard said that he is hoping to make Patriots quarterback Tom Brady look like Bortles. It is worth noting that Byard intercepted Bortles twice.

As the former first-rounder prepares to face the Pittsburgh Steelers, coming off the Jaguars’ first playoff game, and first playoff win, in a decade, he is instead fielding questions about how reputation and how he has to deal with it, but he has taken it in stride.

He said that the criticism will “probably never stop”, pointing out that “there’s people that think LeBron James sucks, so if that happens I’m sure there will be a lot of people that always think I suck”. Of course, if you search Twitter long enough, you can find at least one person who thinks anybody sucks, from Michael Jordan to Jerry Rice to Albert Einstein and Jonas Salk.

While he did cut down on his interceptions this season, throwing 13 on the year—five of which did come during the Jaguars’ final two games, both losses—the year has been otherwise fairly pedestrian for Bortles, throwing 21 touchdowns and completing just a hair over 60 percent of his passes, averaging seven yards per pass attempt.

The majority of the Jaguars’ wins this season have come in games that Bortles has thrown the ball fewer than 30 times. When Jacksonville beat the Steelers in Week Five, he only threw 14 passes, completing eight for 95 yards with no touchdowns and an interception.

While he has put up the occasional good game this season—prior to the final two-game skid, he tossed seven touchdowns and zero interceptions over three games, completing around 70 percent of his passes and averaging nearly 10 yards per attempt—nobody will mistake him for the better quarterback on the field on Sunday.

Perhaps that’s why he said that he hoped that the offense would be able to run Leonard Fournette even more than they did in the first meeting between these two teams.