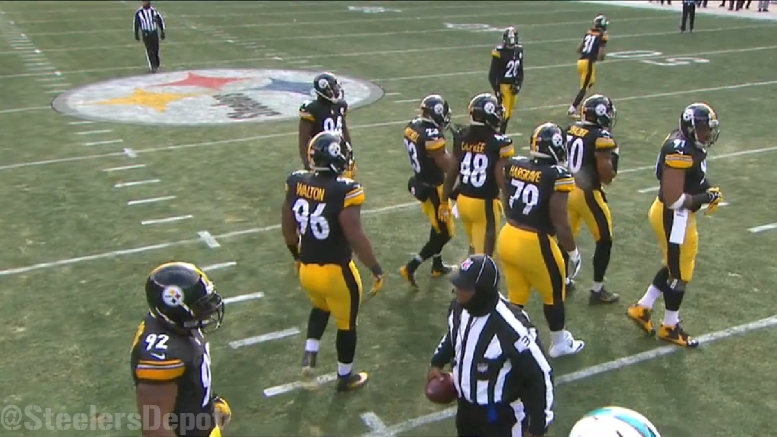 From one season to another, things sure can change. The Pittsburgh Steelers will be entering their first postseason game since the 2017 season on Sunday, and when they do so, they will be fielding a lineup that looks rather different in certain areas than a year ago.

The reasons for the changes vary. In same cases, players were let go. In others, they were injured then, or are injured now. In others still, they simply were not on the team a year ago, and this applies both to the starting lineup and to rotational roles.

So as we sit on the cusp of a new playoff run, I wanted to take a step back and revisit where the Steelers were at this time a year ago, looking at the personnel that was on the field for them, or otherwise available—and in some cases, unavailable.

Some things, of course, do not change, and the bulk of the foundational pieces on offense have not migrated. The entire offensive line is here and ready to go for the postseason, as they were last year. Ben Roethlisberger is here. Antonio Brown is here, though returning from injury. Le’Veon Bell is here as well, as is Jesse James. So what has changed?

Last year, Ladarius Green was supposed to be the starting tight end, and for a brief spell, he was. But by the time the postseason rolled along, he was done, suffering another concussion that, at this point, has probably ended his career.

In his place is Vance McDonald, who has had almost as difficult a time staying on the field, but who has contributed well while he has been out there. He should see a good chunk of playing time, perhaps even the lion’s share at the position.

The cast of wide receivers behind Brown is also almost entirely different, outside of the fourth receiver, Eli Rogers, and Darrius Heyward-Bey. Martavis Bryant is back after a suspension, an upgrade from the end-of-season version of Sammie Coates, and the anytime version of Cobi Hamilton.

The biggest change is obviously JuJu Smith-Schuster, the rookie wide receiver, who scored eight times in total and gained over 900 yards through the air. His contributions have made a big difference this season, and will change what they can do on offense in the postseason in comparison to a year ago.

Defensively, things have changed as well. Cameron Heyward is on the field this time. Ryan Shazier is not. Lawrence Timmons is gone, but has been capably replaced by Vince Williams. Is Sean Spence a capable replacement for Shazier? That depends on how you want to define ‘capable’ in this context.

James Harrison has been replaced—in toto—by rookie T.J. Watt at right outside linebacker, and he has added a new dimension as a player who can rush the passer, play the run, and cover equally well—or roughly equally, anyway.

Ross Cockrell was traded away for a can of beans that can conditionally become franks and beans, upgrading his position at left outside cornerback at right cost in the form of former Pro Bowler Joe Haden.

In the slot, William Gay has been demoted to dime back to provide playing time for first-year Mike Hilton, who has been at times electric this season out of the nickel slot role. He has made an impact in all phases, notching a couple of interceptions while registering four sacks and a number of run stops.

Not even the specialists are immune. Greg Warren was forced into retirement due to injury, and has been replaced at long snapper by Kameron Canaday, who helped Chris Boswell set scoring records for the Steelers this year.

We can talk about other changes, of course. L.T. Walton was essentially starting in place of Heyward a year ago. DeAngelo Williams played a key role in 2017, and his role now belongs to Stevan Ridley. Tyson Alualu has been a treasure for depth. But one of the biggest changes from last year to now has been the continued growth of their young core, even in the absence of their ‘nucleus’, Shazier.