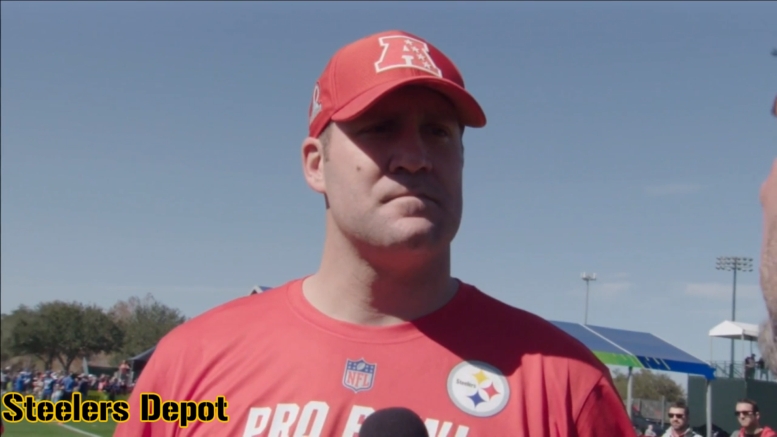 The Pittsburgh Steelers—or at least quite a lot of them—are down in Orlando right now for the Pro Bowl, including nine players and the coaching staff. Among them is quarterback Ben Roethlisberger, who understandably fielded a lot of questions, not just about how the season went, but about what the future holds.

The biggest difference between this past season and the upcoming season will be the fact that the Steelers decided to make a change at offensive coordinator. Rather than renewing Todd Haley’s contract after six seasons, they chose to promote quarterbacks coach Randy Fichtner to that role.

Many have been under the impression that this decision was based primarily on what Roethlisberger wanted. I don’t know really how much you can really read into that. Frankly, I think Roethlisberger often says things without realizing.

But when he was asked about if Fichtner’s promotion can be seen as making him de facto offensive coordinator, meaning that Roethlisberger would be running a large percentage of his own plays, he said instead that it’s about collaboration.

There is certainly an easily incendiary way to interpret that above comment, though to me it doesn’t necessarily come across that way when you watch him say it. But I’m sure that many will read it as an implicit criticism of Haley, and accusing him of running the offense in sort of a monopoly of power.

Perhaps there is some truth to that, and that that is largely why Haley and the offense had to part ways. If so, then great. Provided that the ensuing results deliver the same or better than what we have seen over the course of the past four seasons.

“Randy and I, we’ve worked well together for a long time, and I hope that we’ll continue to work together”, Roethlisberger said of Fichtner. The coach was originally brought in from Memphis to work with the wide receivers in 2007, but was moved to quarterbacks coach after a few years.

Now they begin a new chapter in their relationship together. They have clearly been close for some time now, and the two of them know what it was like working under both Haley and Bruce Arians, so they both have key points of reference from the team’s recent history to work from.