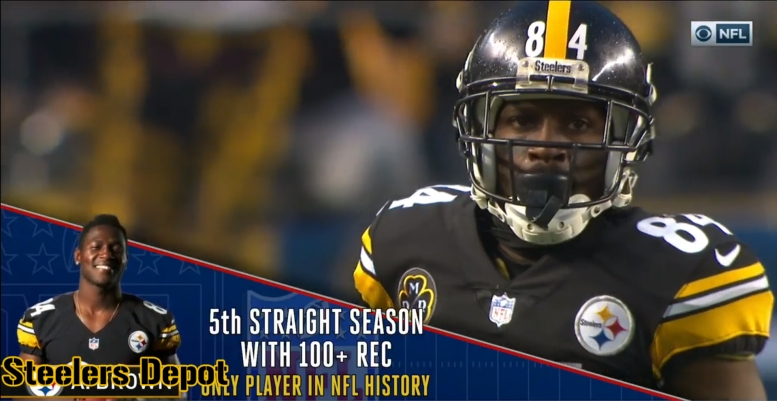 Stop the presses, another person thinks Antonio Brown is good.

I think we have all accepted by now that the accolades for the Pittsburgh Steelers wide receiver are going to follow him throughout the remainder of his career, and probably after as well. He is certainly on a pace to make it into the Hall of Fame someday—that is where players who do things others have never done tend to wind up.

The latest ‘honor’ headed in the All-Pro’s direction comes from Pro Football Focus, which named him their top wide receiver for the 2017 season. While the website’s recognition doesn’t actually mean anything—it’s not going to be included in his biography in Canton or anything—it is yet another example of how universal the belief is that he is at the top of the sport.

Cam Mellor writes in the article about Brown that “smaller-framed, shiftier wide receivers who can create even the slightest separation are the new prototype at wide receiver, and no one epitomizes this more than Pittsburgh Steelers WR Antonio Brown”.

Brown graded out higher by a fair margin than any other wide receiver in the NFL in the site’s rankings, beating out Julio Jones, in spite of the fact that he missed the final two and a half games of the regular season due to a calf injury, only to come back and have a big playoff game.

He can win all over the field — he caught a touchdown pass from four different alignments on offense”, Mellor wrote. “The variation and utilization of Brown in the Steelers’ offense is arguably what makes him so difficult to defend, but in the simplest of terms, Pittsburgh allows Brown to be his versatile, athletic self to exploit potential mismatches all across the field”.

That might not sit well with those who argue that the Steelers are simply all about the talent of their players and that that talent is being held back by incompetence among the coaches. But there is certainly some truth to the fact that some of Brown’s success is aided by how the Steelers deploy him in varied situations.

While noting that he aligned in 10 different spots and caught passes from eight of them during the season, Mellor writes that he also received at least two targets while running 11 different routes during the year, and that his passer rating “dwarfed the NFL average” on the majority of those routes.

That includes a 115.3 passer rating when targeted on go routes, targeted 31 times for 392 yards and five touchdowns.

The author also wisely points out that Brown’s greatness is not limited just to what he does, but when he does it. Highlighted was the game against the Green Bay Packers, during which he made multiple improbable grabs in key situations—and injured his toe in the process.