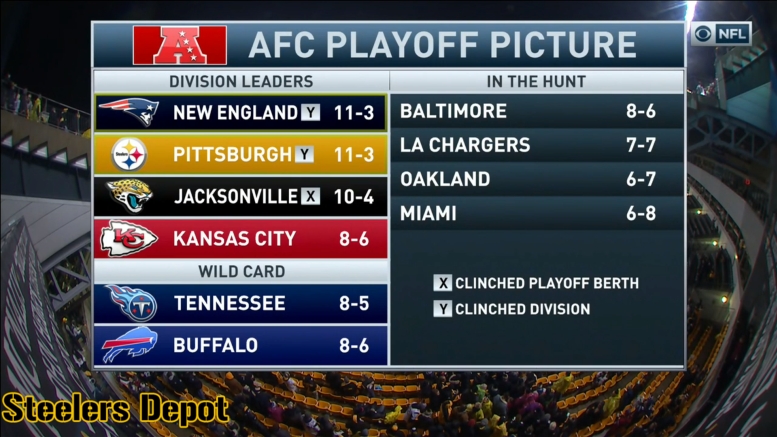 Following weeks and weeks of escalating stakes and tensions, it almost seems that a big game on Christmas Day is suddenly being overlooked as rather insignificant.

But following big wins over the Bengals and then the Ravens, the latter of which clinched the AFC North, all of which led to the pivotal showdown against the Patriots, a match against the Texans just doesn’t feel all that exciting at the moment.

Many fans of the Pittsburgh Steelers, of course, were simply hoping that the final two games of the regular season wouldn’t even mean anything, and that could have been in the cards, had things worked out differently yesterday, with a win and a Jaguars loss, Pittsburgh would have locked up the number one seed regardless of what happened in the final two weeks.

Unfortunately, neither of those things happened, which actually makes the final two games radically more important. In fact, it’s very possible that the Steelers may have to win both of their final two games just to retain possession of the number two seed, and a bye week.

The built-in narrative hoped for was the ‘Watt Christmas’ angle, with elder brother and three-time Defensive Player of the Year J.J. Watt hosting his younger brother, rookie outside linebacker T.J. Watt. Unfortunately, J.J. has been sidelined for the season.

But T.J. has been having himself a very solid rookie season, finding himself a day-one starter. While he had a quiet game on paper last night, limited to just two tackles, he was also coming off his best game of the season as a pass-rusher, registering a game-ending strip sack and a couple of other quarterback hits to go along with it.

One local narrative of interest would have been the first chance to see Tom Savage in the pros. Savage finished off his career with Pittsburgh in college, but on a personal note of interest, he actually began his college career at Rutgers, my own alma mater.

Even that, too, has been taken away, however, after he suffered a startling concussion last week. The young quarterback was visibly shaken, his hand twitching, following a hit, and it is believed that he will not play again this season.

One bright spot to look forward to should be the return of Joe Haden, who has missed the past five and a half games with a fractured fibula. He was game-time decision and nearly played yesterday, so one would figure that he will play the next time around.

Either way, now is no time to take the foot off the pedal, either for the Steelers or for their fans. We should not lose focus just because of the gut-punch loss to the Patriots and simply tune out until the playoffs roll around. There is still much left to play for, and stakes to wage, both in terms of what can be gained, and what can be lost. The next leg in the journey is out in Texas. And then, the hope is that it’s all home games before a trip to Minneapolis for Super Bowl LII…where they may play the Vikings.