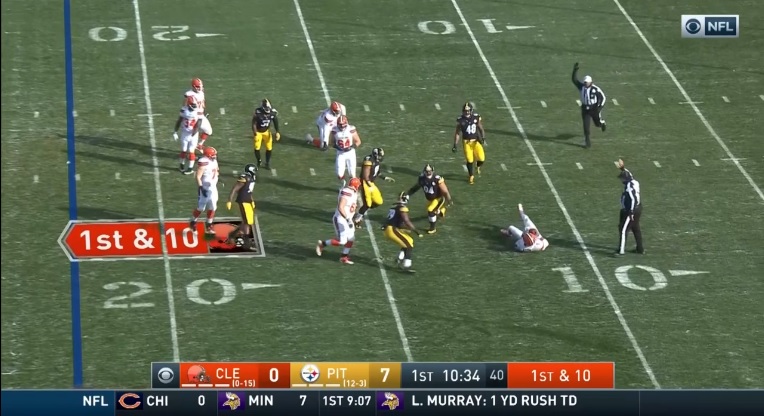 To be honest, we don’t often hear from Tyson Alualu. Or have his name in the headlines. Maybe he’d prefer it that way. After all, he joined a team to play a position that doesn’t always make noise, a backup defensive end in a 3-4 scheme behind all-stars in Stephon Tuitt and Cam Heyward. But maybe that’s how Alualu wants it. Lost in the feel-good stories about Joe Haden being on a winning team is the fact Alualu is too. For the first time in his eight year career, he’s headed to the playoffs.

Talking with the media after the Steelers win over Cleveland, he said a playoff – and Super Bowl – run is the whole reason why he joined Pittsburgh.

“It’s the reason why I chose to be here,” he said via Steelers.com. “To be apart of something special. We’re one step closer to our goal.”

Alualu certainly ended the season on a high note. The first two sack game of his career, he finishes 2017 with four in total, also a career high. Drafted 10th overall by the Jacksonville Jaguars, he never quite lived up to expectations, though most didn’t expect Alualu to get drafted that high either. He was steady, consistent, and that was attractive to the Steelers, who searched for years to find a suitable replacement behind Heyward and Tuitt.

Now, he’s part of a team that just set a franchise record for sacks. And one that is headed into the playoffs as the #2 seed where Alualu and Haden will journey for the first time.

It’s especially true that when the playoffs begin, Alualu’s playtime will be sparse. There’s no time to “rest” the dynamic duo of Heyward and Tuitt. They’ll get as many snaps as they can handle and the Steelers have continued to look for ways to get Javon Hargrave on the field. Alualu might not see more than ten snaps. But here’s the key. There won’t be a dramatic dropoff when he comes in the game for either player. He’ll play the run effectively and do enough as a pass rusher.

No matter his role, he genuinely seems happy to be a Steeler. And knows they’re playing for something much bigger than individual accolades.

“For sure,” he said when asked if this season has been special. “But I think we’ll only see when the season is over. And we got that ring.”