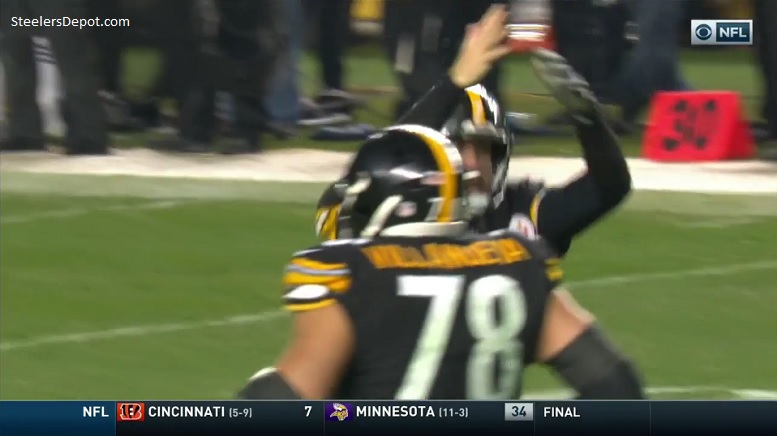 Referee Tony Corrente and his crew are certainly under the microscope this week as a result of how they officiated the Sunday game between the Pittsburgh Steelers and New England Patriots and on Tuesday we learned that the head official called a timeout for the home team during their final offensive possession that they didn’t want.

After Steelers quarterback Ben Roethlisberger connected with rookie wide receiver JuJu Smith-Schuster on a short pass that ultimately resulted in a gain of 69 yards, Corrente signaled a timeout for Pittsburgh with 34 seconds left in the game. During his Tuesday morning interview on 93.7 The Fan, Roethlisberger explained that he didn’t ask Corrente for a timeout after Smith-Schuster was tackled at the Patriots 10-yard-line.

“He went 60 something yards, I don’t even know how far he went, but it’s a long way for guys to run,” Roethlisberger said of Smith-Schuster’s late catch and run. “So, I’m looking to the sideline to Coach [Tomlin], like, ‘Are we taking this timeout, what are we doing?’ Which is very typical. Obviously, the only person that can communicate to me is Todd [Haley] and I’m sure he’s asking Coach Tomlin and everybody. So, I’m putting my hands up like, ‘Are we taking the timeout, are we taking the timeout?’

And Tony [Corrente] the head official, thought I was calling timeout so he blew it. And I’m not sure if Mike wanted to use it or not, I know that he was talking about trying to run up and spike it, but I guess Tony thought I was calling timeout instead of looking at Coach Tomlin and communicating with him. So unfortunately, or fortunately, or however you want to say it, we used our last timeout, but it gave us time to regroup and for JuJu to catch his breath, I’ll tell you that. Which he needed that.”

During his Tuesday press conference, Tomlin was asked if wanted a timeout called after Smith-Schuster had been tackled.

While Tomlin not wanting a timeout in that situation might be true, if you look at Roethlisberger while he’s running down the field after completing the pass to Smith-Schuster, he’s spinning around signaling a timeout. In short, I can see why Corrente called the timeout thinking he was doing the Steelers and specifically, Tomlin a favor.