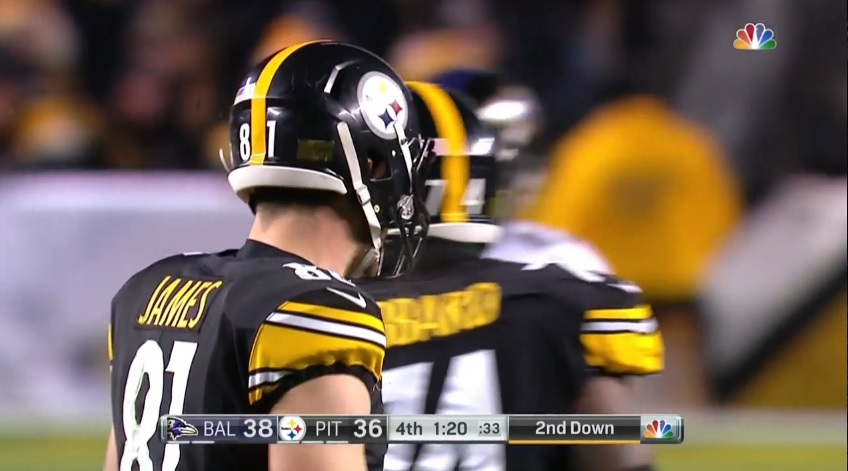 As good as Antonio Brown was tonight, and he was as good as ever, he couldn’t have done it alone. Stepping up without JuJu Smith-Schuster were the Pittsburgh Steelers tight ends. Combined, Vance McDonald and Jesse James caught 14 passes for 149 yards. For James it was a career high, NFL or college. And it was McDonald’s best performance as a Steeler.

After the game, Mike Tomlin praised the work of both of them.

“They were minimizing some stuff on the outside,” Tomlin told the media per the team site. “They were capable of doing that. They were playing without Jimmy Smith. The middle of the field, there was some opportunities there. And guys like Vance and Jesse, made a lot of plays for us.”

Their performance was especially vital without Smith-Schuster. Not having him is a big loss in the slot and subsequently, the middle of the field. Eli Rogers made a couple key catches on third down while James and McDonald continued to be effective throughout.

McDonald made the splash plays, catching two passes for 19 and 18 yards.The latter came at the end of the first half, a time of the game where the Steelers continue to have success, to set up a Chris Boswell field goal before the break. He would’ve had more if not for a shoulder injury that booted him from the game

James was the second most targeted Steeler on the night, hauling in ten of 12. Ben Roethlisberger found him early and often. He had two receptions on Pittsburgh’s first drive and then came up clutch late in the game, making a difficult 3rd and 13 snag in traffic on the game-winning drive.

Rogers had two third down conversions, bouncing back from a string of tough games.

While it’s unreasonable to expect the group to be this good again, especially with Smith-Schuster’s return next week, it was a performance sorely needed. The offense hums the best note when everyone is involved and making plays. Where defenses become more reluctant to double Antonio Brown and when they do, they wind up paying the price. That’s what James and McDonald were able to accomplish tonight.

I’m sure we’ll do a full breakdown on James later in the week. You won’t want to miss that.