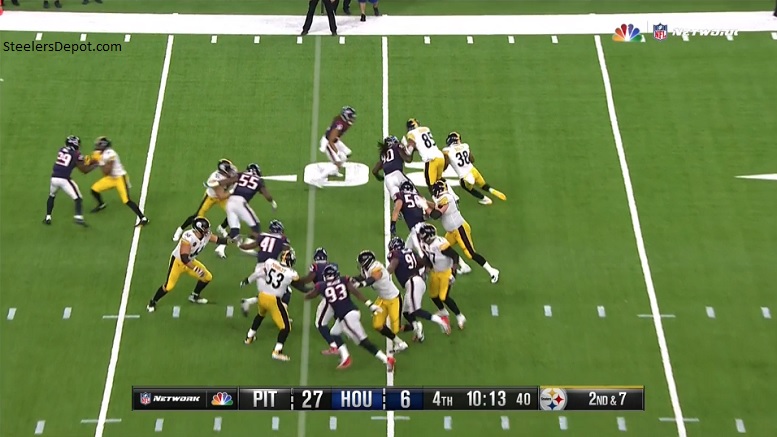 When Pittsburgh Steelers rookie running back James Connor went on the Reserve/Injured list early last week with an MCL injury, the team signed free agent running back, Stevan Ridley to fill his spot on the 53-man roster. The belief was that Ridley would learn the playbook over the course of the next few weeks and be utilized in the playoffs. That belief was wrong, however.

In the Steelers Monday win over the Houston Texans Ridley carried the football 9 times for 28 yards. Granted, four of those carries came when several Steelers offensive backups entered the game, but it was still unexpected that he would see that kind of time.

Going into Monday, Ridley only had 3 carries since the beginning of the 2016 season. His 9 carries against the Texans were the most he’s had in a regular game since January 3, 2016 when he was a member of the New York Jets.

It is even more peculiar, however, that Fitzgerald Toussaint was not in the backfield for one play in the Steelers 34-6 win. Ridley got his first carry midway through the 2nd quarter when the score was only 10-0. That tells me that Ridley being the No. 2 running back Monday was the plan all along. I don’t want to assume things that are probably not true, but is it possible that head coach Mike Tomlin still doesn’t trust Toussaint after his fumble in the 2015 playoff game against the Denver Broncos? That’s a stretch, but it was an interesting coaching decision to have Ridley out there over Toussaint. Toussaint only has one carry in 5 games on the active roster this year and it’s evident that the offensive coaching staff does not want him out there on the field other than kickoffs if they can help it.

The best explanation to this is that Tomlin sees Ridley as the No. 2 running back come playoff time. Ridley got to shake off a little bit of rust against the Texans and looked a little timid, but that could have been expected. we’ll now wait and see if Ridley ultimately gets plenty of carries next week against the Cleveland Browns.