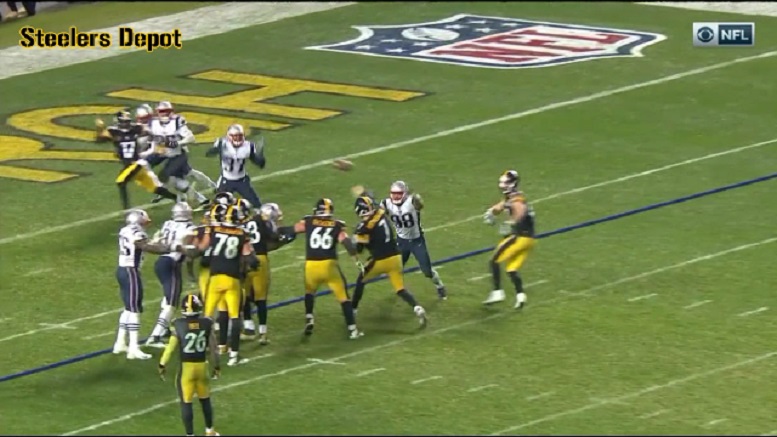 Well Pittsburgh Steelers fans, it doesn’t take a rocket scientist to figure out what this week’s turning point was.  In a span of about 1 minute (real time) the Steelers went from having the game all but won with points on the board, to losing in one of the most improbable ways that you can think of.

To get to our turning point we will fast forward to the 14:04 mark in the 4th quarter. The Steelers trailed 27-24 with just under a minute to go in the game with the ball on their own 21 yard line.  Ben Roethlisberger hit JuJu Smith-Schuster on a crossing route that would turn into a 69 yard gain thanks to a great effort on JuJu’s part to get all the way down to the Patriots 10 yard line.  The Steelers would use their final timeout leaving them 34 seconds with a chance to win the game.  Here is where things turned for the worse for the Steelers.

On the next play, Roethlisberger would find Jesse James open right at the goal line. James would catch the ball as he was falling to the ground and reach over the end zone plane for a 10 yard touchdown.  That was it- the Steelers finally beat the Patriots and would secure home field advantage for a potential rematch with them in the AFC title game….or so we thought.  As with every touchdown in the NFL, the play was reviewed and Steeler fans everywhere were assured by Tony Romo and Jim Nantz that the play would stand.  Then we got word that the referees were looking at the actual catch and to see if James was able to maintain control throughout.  Whatever your opinion is of the NFL catch rule, it is a still a rule and ultimately the play was ruled an incomplete pass and the points were taken off of the board.

Even after all of that, the Steelers still had a chance to win the game. With 28 seconds left on the clock and no timeouts remaining, Roethlisberger was able to hit Darrius Heyward-Bey on a crossing route but he was unable to get out of bounds to stop the clock.  Hurrying up to the line of scrimmage on 3rd down, Roethlisberger attempted a fake spike play and the only option to throw the ball was to Eli Rogers running a slant right into a crowded middle of the field.  The pass would be deflected by Patriots Defensive Back Eric Rowe and would bounce right into the arms of fellow Defensive Back Duron Harmon for a game sealing interception.

With a sequence of events such as this there will be plenty of questions and topics for discussion this week as Steeler fans everywhere will try to make sense of what happened in the final minute of play.  Some of the things that will be discussed are:

What is the actual catch rule currently? Does it make sense anymore?

Was it considered a catch when James’s knee hit the ground, and then crossed the plane as a runner?

Why didn’t the Steelers just spike the ball and kick the field goal to force overtime?

In a situation like that, why wasn’t Rogers running a fade route where Ben could put the ball in a place that only be could catch it?

Even with the slant route over the middle, why didn’t Ben just throw it high out of the end zone seeing how it wasn’t open?

As you can see, there is a lot to think about here and Steeler fans will surely demand answers this week.  Whatever the answers to those questions are, the facts remain that the Steelers lost to the Patriots 27-24 and are now the #2 seed for the AFC playoffs.  With the Jacksonville Jaguars 1 game back and holding a head to head victory over the Steelers, these final 2 games against the Houston Texans and Cleveland Browns are now more important than we thought they would be.