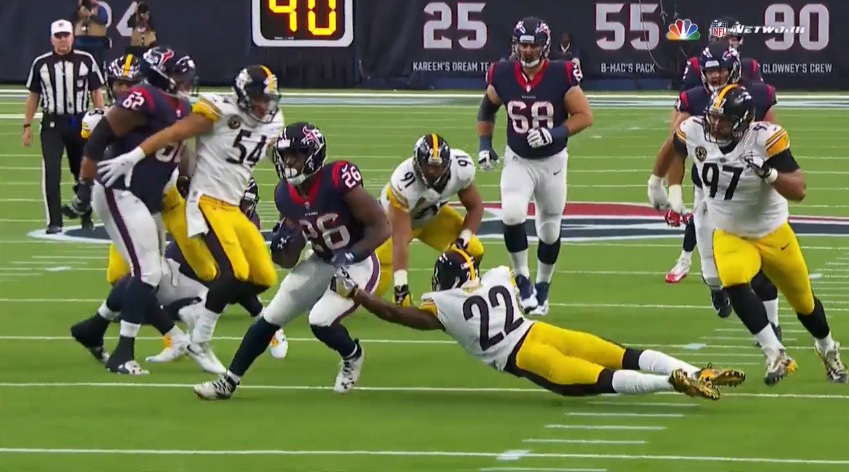 The win on Christmas Day sure was nice from the Pittsburgh Steelers over the Houston Texans, but how does the Steelers’ season-best performance in missed tackles sound?

That’s just what the Steelers did on Christmas Day in Houston, coming up sharp, rolling on offense while turning in one of the best performances of the year on defense.

Yes, the Texans had a ton of success running the ball, but none of Houston’s big plays on the ground came because of missed tackles. There’s some positive in that.

Let’s take a look at the tackling performance from Week 16.

Coming off of a devastating loss to the New England Patriots, I’m sure most Steelers fans were worried about a bit of a letdown game on the road against an inferior opponent. So much for that narrative, eh?

A season-low of 5 missed tackles led to an outstanding performance from the Steelers’ defense, rushing struggles aside.

Not one missed tackle led to a splash play from the Texans, which has been a rarity from the Steelers.

Let’s take a look at two key misses from the Christmas Day blowout.

Facing a 2nd and 22 following a holding call, the Texans hand the ball off to Lamar Miller on a simple halfback draw in hopes of picking up a chunk of yards against a spread out Steelers defense, hoping to make for a more manageable third down for T.J. Yates.

Miller has a clear lane up the middle once he takes the handoff, setting up a one-on-one with veteran defensive back William Gay in space. Gay easily loses that matchup, diving for Miller’s legs, resulting in a miss that allows the Houston running back to pick up a few more yards.

On the very next play, Yates scrambles for the first down, setting up first and goal. Fortunately for the Steelers – and Gay – Artie Burns picks off Yates in the back of the end zone on fourth down, keeping Houston off the board.

Late in the second half, Sean Spence records his fourth missed tackle of the season in just his third game.

Closing in on halftime, the Texans are still searching for their first points of the game. Facing a heavy rush, Yates has to dump this ball off to backup tight end Ryan Malleck in hopes of the big tight end picking up yards after the catch.

Spence does a nice job of closing quickly to hit Malleck, slowing him down, but he doesn’t fully wrap up and bring his feet, allowing Malleck to spin out of the tackle attempt. However, the Steelers swarmed to the football and held Malleck for a short gain.

Overall, the Steelers did a great job of flying to the football and gang tackling, which has been a key part of some of their best defensive performances of the season.

What I’m overly impressed with is that the Steelers missed 4 of the 5 total missed tackles in the first half, meaning that in a clear blowout game with the starters still on the field deep into the game in the second half, the defense never let up, in terms of focus and intensity, missing just 1 tackle in the second half of a cakewalk game.

That’s very encouraging, at least to me.