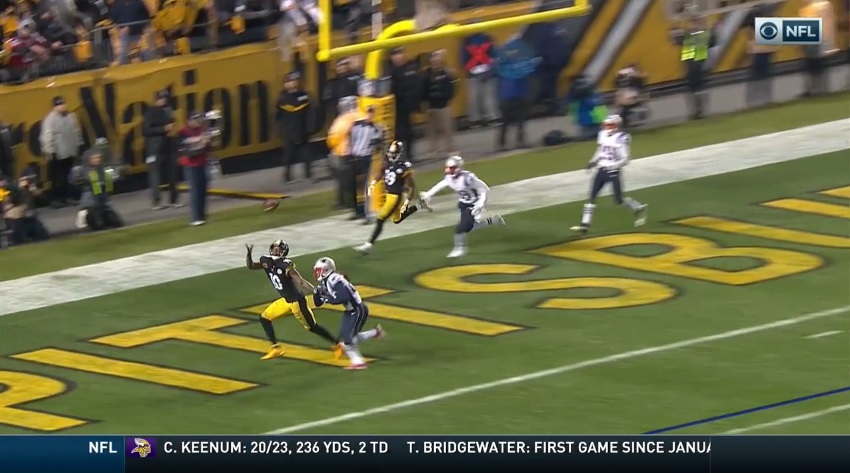 Wow, what a game. I am not even sure where to start.

Once again, what is a catch, NFL?  Steelers’ fans sure would like to know today.

Aside from a heartbreaking call, the Steelers were the clear better team in the marquee matchup against the Patriots, even after losing Antonio Brown in the second quarter with a partially torn calf muscle.

The Pittsburgh defense looked good for much of the game, in terms of the pass rush and man coverage (unless you’re Sean Davis), while the offense did pretty much whatever it wanted.

Sunday’s loss is just a tough one to swallow right now.

Let’s take a look at how the Steelers’ positional groups performed.

The last-second fake-spike interception into triple coverage was maddening coming from Ben Roethlisberger, but the veteran quarterback was otherwise sharp in a game that the Steelers absolutely needed him to be.

Roethlisberger dialed it up deep when it made sense to, took the check downs when they were there and really took advantage of the middle of the field against the Patriots, carving them up for 298 yards and 2 touchdowns, misfiring on just 8 total passes in the loss.

He moved well in the pocket to avoid the rush, extended a few plays with his legs and even rushed three times for 10 yards.

It might be hard to look past the awful interception late, but Roethlisberger was in peak form once again. That’s great news for the Steelers moving forward.

What I don’t like from Roethlisberger coming out of this game is throwing the coaching staff under the bus for the decision not to clock the football despite Roethlisberger wanting to do just that. The play call is largely irrelevant at this time. The decision to throw the football to Rogers in that situation with that coverage is the problem.

If Roethlisberger didn’t liked what he saw, he should have chucked it 15 rows deep and forced the Steelers to settle for the field goal for the tie and overtime. Personally, I liked going for the win – in terms of the call – but hated the execution from the veteran quarterback.

The blame falls nowhere else but with him and his right arm from an execution standpoint.

Possibly lost in the crazy ending to an otherwise great game was just how truly dominant Le’Veon Bell was as a runner and receiver.

Bell carved up the Patriots for 117 rushing yards and one touchdown on 24 carries, routinely breaking free into the second level of the defense for positive rushing plays. As a receiver, the Patriots were forced to try and check Bell with a cornerback when he lined out wide. It didn’t work well.

Coming out of the backfield as well, Bell finished with 5 receptions for 48 yards on 6 targets, picking up the slack in Brown’s absence.

James Conner continues to give the Steelers good snaps as a backup running back, providing the Pittsburgh run game with a shot of energy as the rookie rushed for 13 yards on 3 carries before exiting with a sprained knee. Keep an eye on that this week.

One would think that when the best wide receiver in football leaves in the second quarter with an injury, the rest of the receiving corps would fall apart. That wasn’t the case for the Steelers are Martavis Bryant continues to come on strong as a receiver, while JuJu Smith-Schuster put on a show of his own.

Bryant finally connected with Roethlisberger on a deep ball and also pulled in a spectacular one-handed touchdown to give the Steelers the lead at the half. He looks much more confident and in tune with what the Steelers want to do offensively.

As for Smith-Schuster, the kid continues to show up and produce each and every week. This week, Smith-Schuster hauled in 6 passes for 114 yards, including a thrilling 69-yard sprint down the left sideline on the Steelers’ final drive, setting up what looked to be the game-winning touchdown from Roethlisberger to Jesse James.

Eli Rogers was the target on the ill-advised final throw, which happened to be just his second target of the day. Rogers’ first target was an 18-yard touchdown on a read-option play that allowed Rogers to get behind Eric Rowe for the score off of a terrific strike from Roethlisberger on the move.

Brown hauled in 2 passes for 24 yards before exiting. However, his first catch gave him 100 on the season, marking the first time in NFL history a receiver has hauled in 100+ passes in five consecutive seasons.

This unit combined to haul in just 3 passes for 15 yards, but it’s the 1 pass that doesn’t count today that’s killing most of Steeler Nation.

At this point, I still don’t know what is and isn’t a catch, and that’s frustrating. The NFL is so inconsistent when it comes to these types of plays that fans never know.

I don’t fault James for trying to reach the ball across the end zone for the go-ahead score. He was right in referencing Xavier Grimble’s diving touchdown against the Cincinnati Bengals last year where Grimble never really completed the catch and lost control once he hit the ground. That touchdown still stood.

Just an odd, odd way to determine the outcome of a tremendous game.

The unit up front was called for three penalties – 2 of which were on Alejandro Villanueva (holding, false start), but the starting five helped the Steelers rush for 143 yards and 1 touchdown on 31 carries against New England (4.6 yards per carry).

Speaking of Villanueva, he had a rough game. The 2 penalties hurt, but he was a mess at times as a pass protector. The Patriots clearly wanted to go at him and force him to think on the move. For the most part, he stood tall, but there were a handful of pass sets that he really struggled with, including a whiff on Trey Flowers that allowed the Pats’ linebacker to get a free shot at Roethlisberger.

David DeCastro was called for a holding call in the loss, but the standout right guard helped open some massive lanes for Bell on the boundary, as did Maurkice Pouncey. DeCastro helped spring Bell for the running back’s touchdown in the fourth quarter that put the Steelers up by 8.

Five quarterback hits and 1 sack from the Steelers’ defensive line was a strong showing against the pass, but this unit seemed to struggle against the Patriots’ run game, giving up big rushing lanes to the likes of Dion Lewis and Rex Burkhead.

New England rushed for just 77 yards and 1 touchdown on 19 carries (4.1 yards per carry), but when the Steelers really needed a stop, the Patriots were able to run the ball successfully against the Pittsburgh front.

With the Steelers playing a ton of man coverage involving the linebackers as well, you have to count on some linemen up front winning 1-on-1 battles in the run game. That didn’t happen often enough for the Steelers.

Cam Heyward recorded the lone sack of the group, giving him 10.0 on the year, marking the first time since 2010 a Steelers defender has cracked double digits in sacks.

I have to say, I was mostly pleased with the Steelers linebackers’ performance on Sunday.

Sean Spence looked much better after looking very rusty and slow against the Ravens, while Vince Williams came up big with the first interception on Tom Brady in the Steelers-Patriots matchup since 2005.

Off the edge, Bud Dupree had a big game, recording 2 tackles, 2 tackles for loss, 1 sack and 1 tackle for loss, consistently coming off the edge with speed and power, creating problems for the Patriots.

TJ Watt was rather quiet on the day, recording just 2 tackles.

Sunday afternoon was another tough, tough game for Davis, who drew the tough draw of having to cover Rob Gronkowski 1-on-1. Gronk routinely burned Davis, finishing with 9 receptions for 168 yards while smoking Davis off the line on the late 2-point conversion to stretch New England’s lead to 27-24.

Against the run, Davis came downhill well, but too often he was left in coverage alone on Gronkowski and it came back to hurt the Steelers.

I thought Artie Burns played very, very well against the Patriots. When locked up in bump-and-run man coverage, he was tough to beat. Rarely did Brady challenge him. I hated the pass interference call on Burns when covering Gronk down the left sideline. Both players like to be physical when the ball is in the air. Let them play.

Burns did get caught by Brandin Cooks on a corner route, not dropping deep enough in his zone, leaving a sizeable hole between himself, Cooks and Mike Mitchell that cooks hauled in for a 43-yard gain.

Cam Sutton was beat by Cooks for a touchdown in the second half, but for much of the day he wasn’t heard from, which can be a good thing for a rookie cornerback.

Mike Hilton broke up two potential touchdown passes from Brady in the end zone, turning in a strong performance out of the slot, while Mitchell was solid on the back half, finishing with five tackles.

Chris Boswell drilled a 51-yard field goal in the rain at Heinz Field, continuing his impressive run as the Steelers’ kicker, while Jordan Berry had a strong day punting the football, pinning the Patriots back in their own end each time, including 1 punt inside the 20-yard line.

Smith-Schuster had a bit of a wiggle to his game as a returner, averaging 24.5 yards per return on 2 tries, while Fitzgerald Toussaint usually handled the short kickoffs and got what he could out of it.

Coverage units did a great job of handling Lewis and Danny Amendola on the day.