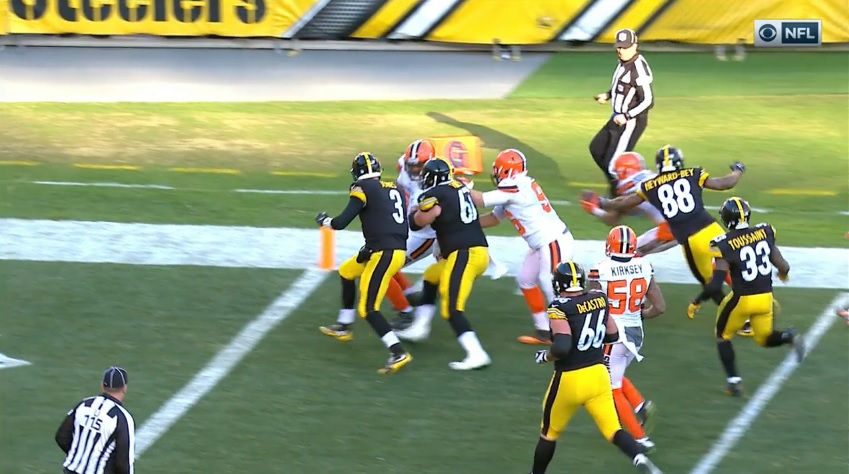 Back at it, breaking down what the Pittsburgh Steelers have to do to win (or lose) in the regular season finale against the Cleveland Browns. My always unreliable prediction at the bottom.

– The pressure continues to get to Deshone Kizer. As far as I know, Cam Heyward is the only defensive player sitting out for the Steelers. Maybe Joe Haden but he didn’t show up on the injury report like the rest of the team stars. And frankly, he could use some reps before the plays – injury has afforded him enough rest.

That means that despite any offensive struggles that happen, the defense’s expectations should be unchanged. And that means continued pressure on the rookie Kizer. He’s been sacked in all but one game this season and dropped seven times in the opener versus the Steelers. Focus has to be on T.J. Watt, squaring off against Spencer Drango. I watched Drango at the Senior Bowl – he did’t look like an NFL tackle. Watt’s gotta eat.

– Landry Jones hits a couple of deep bombs. Like I wrote yesterday, Jones’ game is throwing it far and outside the numbers. Chance for Martavis Bryant to have a really big day. But the Steelers’ offense won’t move the ball unless they can get a couple of chunk plays.

– The hustle doesn’t stop. And I don’t expect it to. The Steelers won in last year’s finale, in part, due to all-out hustle. Darrius Heyward-Bey chasing down an interception to force a fumble and touchback at the goal line. Jarvis Jones forcing a fumble at the five with under a minute to go. And a goal line stop that forced a Browns’ field goal in OT, allowing Cobi Hamilton to leap for the game-winner. We’ve seen that sort of hustle from Jesse James, Jordan Berry, and Vance McDonald this year. All has to continue to close this one out.

– The pressure gets to them. Literally. The Browns are sure to blitz, sure to get after Jones, with an array of blitzes from all over the field. After all, he was sacked four times a year ago. Easy way to kill a drive, turn the ball over, and give a woeful Browns’ offense the punchers chance it needs. If Jones is sacked no more than twice, I’m feeling good about this win. If it’s more, maybe it’s a close one…

– Run defense doesn’t bounce back. Got carved up last week and that was with Cam Heyward. The Browns aren’t a bad trench team. Strong run game, even better run defense. Steelers should actually look to match how successful Cleveland has been in their run defense. Isaiah Crowell can break one and Duke Johnson is one of the game’s most underrated dual threats.

– Josh Gordon isn’t found. Gordon is going to be moved around, peppered with targets, and he can run the entire route tree. He’s going to be tough to stop and certainly a weapon the Steelers didn’t have to worry about in the first matchup. Can’t lose sight of #12.