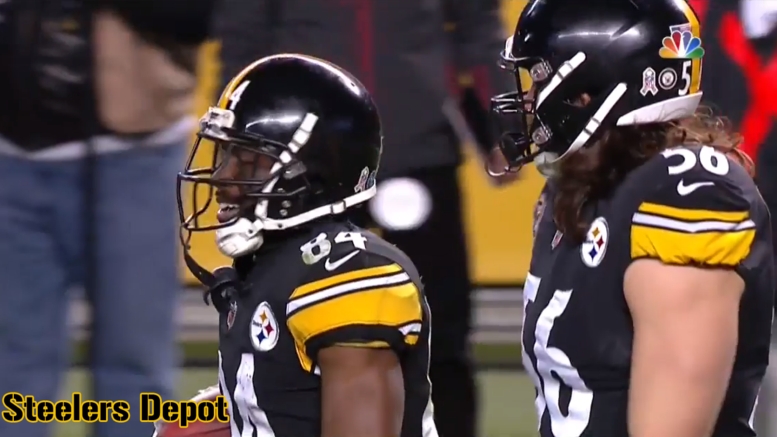 Though the Pittsburgh Steelers may have tinkered with their return men on kickoffs, they didn’t initially change the scheme. The Packers chose to kick to Martavis Bryant’s direction when they could have gone in Fitzgerald Toussaint’s direction.

Vince Williams drew an unnecessary roughness penalty after the Steelers’ first kickoff. He was sparked to anger when a Packers player seemed to pull him down by his facemask.

On the Steelers’ second kick return, they did shift their returners, lining Bryant up toward the center of the field, with Toussaint to the right. On this return, he may have been better served trying to break the run to the right outside. Instead, he only reached the 21. They did stick with the adjusted alignment for the rest of the game.

Jordan Berry has continued to play better in recent weeks. His first punt, from the Packers’ 40, died all on its own inside the five-yard line. It was downed by Darrius Heyward-Bey, with Brian Allen the opposite gunner.

Allen was also given work as a jammer, but since I already covered him earlier today, I shouldn’t need to belabor the point. He does seem to have the potential to be a pretty good special teamer.

Pittsburgh’s kick coverage was an asset on the night when the Packers chose to take kicks out. L.J. Fort was able to clear a blocker to get penetration, making the tackle at the 17 on one. He and Mike Hilton split another tackle short of the 25 at the start of the third.

Berry’s numbers might look bad, but they need to be taken in context. His first punt was 35 yards, but put the Packers on the five. His second, 33 yards, was fair caught at the 10. And he had pressure in his face, Green Bay overloading the right side and nearly getting home.

The more that I watch it, the more convinced that I become Artie Burns got a piece of Mason Crosby’s missed 57-yard field goal. He typically rushes off the opposite side, but came off the right on this time. See the cover image.

The Packers really tried to confuse the punt return unit at the top of the fourth quarter, lining their right wing into the slot just a couple of feet inside the numbers, which prompted all kinds of adjustments that were unnecessary.

And yet Roosevelt Nix still nearly broke through, and may have done so if he were not held. Nix was originally over the right wing, but they shifted to put J.J. Wilcox there instead, and it nearly paid off.

The Packers’ left gunner on the next punt was flagged for a facemask penalty. The Steelers could have added 15 yards but chose to rekick. Instead they only get 11 yards in terms of improved field position.

A late Berry punt could have been better, I admit. Punting from the 46, his kick only traveled 28 yards, fair caught at the 18.

On the flip side, the Packers’ next punt traveled 53 yards, forcing the Steelers to begin their game-winning drive at their own 30. Brown tried to make something happen on the return, but got only two yards, and got up upset with his coverage players.