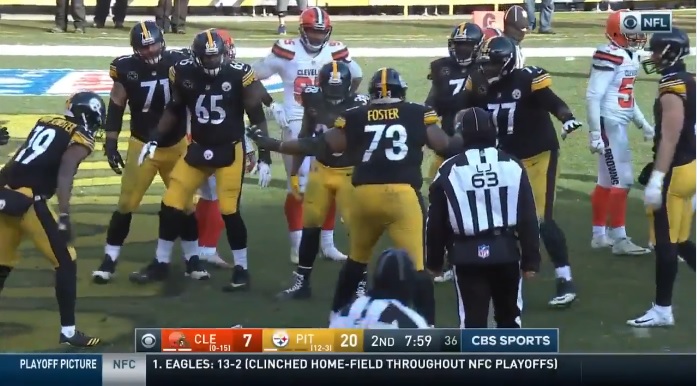 Last time to get weird in 2017. Stats of the weird, Steelers vs Browns.

– JuJu Smith-Schuster…have yourself a day. His 96 yard kick return TD was the first KR touchdown by the Steelers since 2010, when Antonio Brown (also a rookie) took a reverse to the house against the Tennessee Titans. The team went 291 tries between touchdowns.

Smith-Schuster set a team rookie record for yards in a season, surpassing Jimmy Orr’s mark set in 1958. And his 265 all-purpose yards are the second most by a Steelers’ rookie, only topped by Charles Johnson’s 273 in 1994.

Finally, he joins Orr as the only two Steelers’ rookies with three 100+ receiving games. JuJu had three, Orr with five.

– Stevan Ridley recorded his first rushing touchdown since October 5th, 2014 when he was still a member of the New England Patriots.

– Here’s a stat that shouldn’t sit well with you. With two given up today, the Steelers allowed eight completions of 50+ yards in 2017. As far back as stats go, 1994, it’s only the second time it’s happened. 1998 was the other, a typical year we reference when talking about bad pass defenses.

– Here’s a stat that should sit well with you. In the past three years, six games, the Steelers have sacked the Browns 38 times. That’s an average of 6.3 per game. Six came Sunday.

– Darrius Heyward-Bey had two touchdowns on his last three carries. Of current Steelers dating back to last year, he’s second on the team in rushing touchdowns.

– Tyson Alualu had two sacks today, the first time in his career he’s tallied a pair in a game. His four sacks in 2017 is also a career high for the eight year vet.

– T.J. Watt finishes the season with seven sacks, one more than Jarvis Jones had in his entire Steelers’ career.

– Vince Williams ends the year with eight sacks, the first Steelers’ off ball player to record that many since Kendrell Bell in 2001.

– L.J. Fort recorded the second sack of his career. The other came in 2012, his first career game…as a member of the Cleveland Browns.

– And finally, the Steelers continue to be one of the NFL’s best second-half teams. Over the second half of the season since 2013, the Steelers are 32-8 under Mike Tomlin. Their record year-by-year.