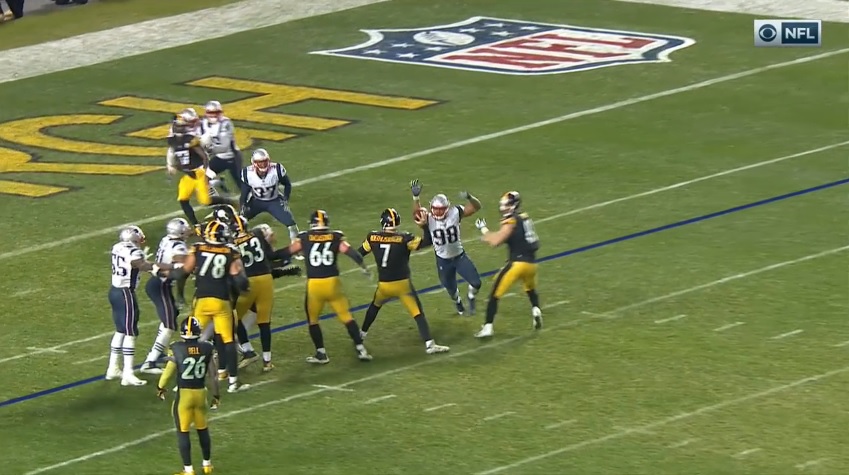 Things sure could get crazy in a hurry in close games as the clock ticks down. We saw an awful lot of chaos over the course of the final three minutes of tonight’s game between the Pittsburgh Steelers and the New England Patriots, but the most damning bit of confusion evidently came just prior to the penultimate snap of the game, the Steelers’ final offensive play.

The defense just gave up five-play, 77-yard, 1:10-long go-ahead touchdown drive, which the Patriots capped off with a two-point conversion that put them up by three points. The offense was left with 52 seconds and one timeout to try to score a touchdown to take the lead. And it very nearly worked.

On the first play of the drive, Ben Roethlisberger hit JuJu Smith-Schuster over the middle, who was able to work up the sideline and then back to the middle of the field for 69 yards, on a play that used their final timeout. After Jesse James’ 10-yard reception on the final play was overturned, things got rather hectic.

Roethlisberger faced pressure on second and 10, eventually hitting Darrius Heyward-Bey, who was unable to get out of bounds. After the game, Roethlisberger said that he wanted to spike the ball to stop the clock, even though that would have made it fourth down.

Instead, he heard from the sideline, according to Gerry Dulac, that they did not want to give up the down. But when you are the quarterback and you are told on the fly not to do what you planned on doing, things can get a bit messy.

Ben said he wanted to spike on last play but call came from sideline not to.

They did, and on the subsequent third-down play, as time ticked down, he was again under pressure, but ultimately forced pass over the middle on a slant to Eli Rogers, which was defended and batted into the air, plucked away for an interception by a defender, ending the game.

Now, there are a number of things to discuss here, not the least of which being whether or not Roethlisberger, as the foremost leader of the team, should have even divulged this information, as it presents the appearance that he is criticizing the sideline and deflecting blame.

Head Coach Mike Tomlin after the game, by the way, that he didn’t have a problem with the decision to run the play and go for the win, rather than attempt the field goal. The way it was phrased seems to indicate that he was not aware that the directive not to spike the ball came from the sideline—presumably from Todd Haley.

I’m sure these are the angles that will be most discussed about the decision, but my biggest concern is a quarterback running a play that he is not prepared to run. This does not excuse the decision nor the throw that he made on the play that lost the game, however.

UPDATE: Dulac says it was Tomlin, not Haley, who made the call.

Ben said Todd Haley was calling for him to not clock the ball, but it was Mike Tomlin, not Halley, who wanted to run a play. Either way, can't throw interception there.