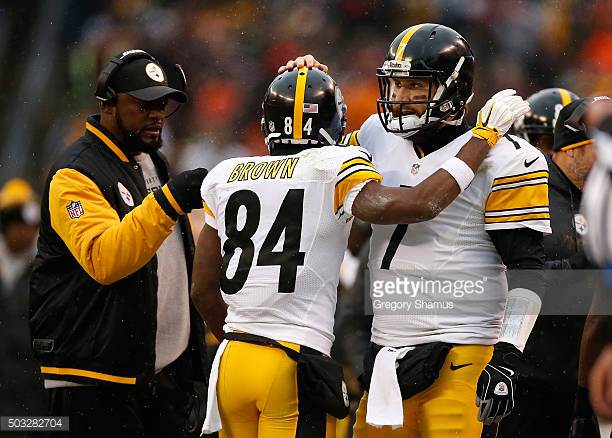 Mike Tomlin wouldn’t talk about anything in the future but for this week, Antonio Brown will not wow the world. Out with a bad calf contusion, the passing game now goes through…well, everyone else. Obvious as it is, no one player can step up and replace the #1 receiver in the world. The best hope is for everyone else to chip in and be greater than the sum of their parts. That’s Ben Roethlisberger’s mindset and what he told the media Wednesday morning.

“AB, you can’t replace him with one man,” Roethlisberger told reporters via the team site. “AB is not human. We’ll have multiple guys trying to fill that spot. But I know we have guys who are excited, willing to try and fill those shoes. I think Justin is going to be one, I think Martavis will do some stuff, JuJu. I mean, everyone really will have to step their game up. That includes me too. I have to be better.”

If there is hope, it comes from the Steelers’ success after Brown exited in the second quarter of last Sunday’s game. The offense didn’t tank; they rose to the moment. JuJu Smith-Schuster continued his success, Eli Rogers caught his first TD pass in a year, and Martavis Bryant made two spectacular catches, one for a touchdown.

“They did great. Guys stepped up. Played different positions. JuJu, Eli, Hey-Bey, Martavis. Really proud of how all those guys played.”

Matching up against a poor Houston Texans’ defense doesn’t hurt either. The Texans have one of the worst secondaries in the NFL. They’re allowing 8.2 yards per attempt through the air, 31st in the NFL, and the 27 passing TDs they’ve given up is tied for second-worst. Houston’s pass rush hasn’t done them any favors either, tied for 20th with just 31 sacks.

Last week, they got blown out by the Jacksonville Jaguars, 45-7. Blake Bortles completed 21/29 passes for 326 yards and three touchdowns despite throwing to the likes of Keenan Cole and Jaydon Mickens, not exactly a cast of All-Stars.

Without Brown, the Steelers still should enjoy plenty of success this week and next in the hopes of locking up a first round bye.