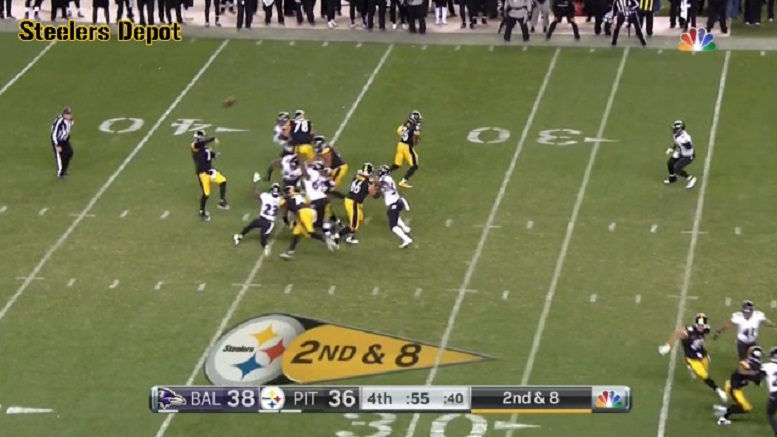 With 1:08 left in the fourth quarter of the Sunday night game against the Baltimore Ravens, Pittsburgh Steelers quarterback Ben Roethlisberger connected with wide receiver Antonio Brown with a deep pass down the right sideline for a gain 34 yards. At that point, the Steelers offense was just on the outer limits of field goal range and with 1:02 left on the clock it was probably assumed by many that three consecutive running plays would be called and executed in order to not only gain a few extra yards, but also perhaps force the Ravens to burn their two remaining timeouts. While the offense did run on first down, the next two plays were both passes and that probably left several fans and analysts scratching their collective heads in bewilderment.

After Steelers running back Le’Veon Bell gained two yards on his first down run, the Ravens used their next to last timeout with 56-seconds remaining in the game. However, instead of running again on second down, Roethlisberger dropped back to pass and threw a high-arching deep pass to tight end Xavier Grimble while off balance. Grimble was covered very closely by two Ravens defensive players on his vertical route and thankfully the pass from Roethlisberger dropped harmlessly incomplete before the deep safety could arrive in time to intercept it.

On third down and 8 from the Ravens 28-yard-line, Roethlisberger looked to pass again after getting the snap. This time, however, the quarterback had to escape a little pressure to his left and while ultimately being taken to the ground by a Ravens defensive player, he was able to get rid of the football to wide receiver Eli Rogers. The wobbly and off-target pass went off the outstretched hand of Rogers and thankfully hit the ground incomplete.

While Steelers kicker Chris Boswell did follow those two dubious play calls with 46-yard field goal to give Pittsburgh a 39-38 lead, there were still 42-seconds remaining in the fourth quarter when he kicked off and thus plenty of time for the Ravens offense to get 30 yards in order to give their great kicker Justin Tucker a chance to win the game with a long field goal. Thankfully, the Ravens offense wasn’t able to do that and the Steelers held on for the win.

After the game was over, Roethlisberger was asked to explain the reasoning behind the two passing play calls.

“The call came from the sideline and they brought kind of a heavy blitz on the first one,” Roethlisberger said. “[I] kind of threw it to a spot where I knew maybe there was a chance that our guy could get it, but it was kind of a safe spot to throw it to. You know, that’s kind of a tough call because we put a guy in position that hadn’t really been there throughout the week. And then the second one, really it’s about the same sort of thing. They brought the pressure and just don’t take the sack. You know, just try to get it out of my hands there at the end because four, five, six yards could be a killer there.”

Judging by Roethlisberger’s response, the quarterback sounds like he wasn’t too happy with that particular play call on second down and especially being as Grimble was the primary target and not fellow tight end Vance McDonald, who had to leave the game in the second half with a shoulder injury.

In short, and Monday morning hindsight aside, the Steelers should have called a straight-ahead running play on second down in an attempt to not only get Boswell a few yards closer, but also force the Ravens to burn their last timeout. Sure, the Ravens defense was stacked at the line of scrimmage, but even so, there needs to be faith that Bell at least won’t lose yardage on a run.

As for that third down passing play, it’s a good thing Roethlisberger wasn’t ultimately sacked. Had he went down at the Raven’s 34-yard-line, then Bozwell would have had to make his fourth down kick from 52-yards out.

In summation, and assuming offensive coordinator Todd Haley called both of those passing plays, shame on him. Thankfully, Boswell bailed him and the rest of the team out with his 46-yard field goal.