The Pittsburgh Steelers came through with a nice Xmas present for Steelers Nation. A comfortable 34-6 victory with no significant injuries to clinch a bye in the playoffs. The Black & Gold did the NFL a favor by playing in yet another Xmas day game in a slot that needed a boost for its television ratings. I don’t know if it did; and I don’t really care. What was important for me is the win and paucity of injury news.

Very nice to see Joe Haden, Vance McDonald and Marcus Gilbert back in action. With Antonio Brown on the mend the team appears to be getting stronger with just one regular season left in the season. This game should build confidence within the team, as well as, the fanbase. Martavis Bryant impressed me with a stretch to convert a first down. Demonstrated great awareness and determination to get the job done. Eli Rogers made me a little nervous on a couple fair catches; but then ripped off a couple nice punt returns.

Bud “I’m no Dud” Dupree made his presence known and got a fumble recovery. And how about Mike Hilton? Wow, he is someone opposing coaches must account for. Cam Heyward gave further demonstration why he should have been named to the Pro Bowl – any chance he can be named to the All-Pro team which is more prestigious in my opinion? Rumors about Artie Burns being benched were dispelled and he got an interception. The Houston Texans were a severely depleted team; but unlike other games when heavily favored; the Steelers cruised to a comfortable win. That was a bow tied to the gift wrapping.

I just wrote an article on concussions in the NFL. Both Houston Texans quarterbacks T.J. Yates and Taylor Heinicke had to leave the game to be evaluated for potential concussions. Tom Savage was already declared out due to a concussion. Imagine if they had a third quarterback that was a healthy scratch. I have never understood the reasoning for forcing eight players to be inactive for games. I firmly believe that teams should be permitted to play anyone on their 53-man roster that is healthy.

Of course, there was the surprising news two days before Xmas of James Harrison being waived from the team. I’m just an average fan; so, held out hope that Pittsburgh would re-signed Deebo. It would have been sweet for him to get a sack against the Cleveland Browns. The same team who he recorded his first sack of his career. No one picked him up by the waiver deadline which was 30 minutes before kickoff. There was still time and the playoffs for James to wear the Black & Gold just one more time. But alas, the Evil Empire played with our emotions and then swooped in to give James a one-year deal. In any case, I know it’s a business and even though he signed with the New England Patriots; I will always remember James Harrison wearing the Black & Gold; I hope that the Steelers organization and its fans pay proper homage to him in due time. 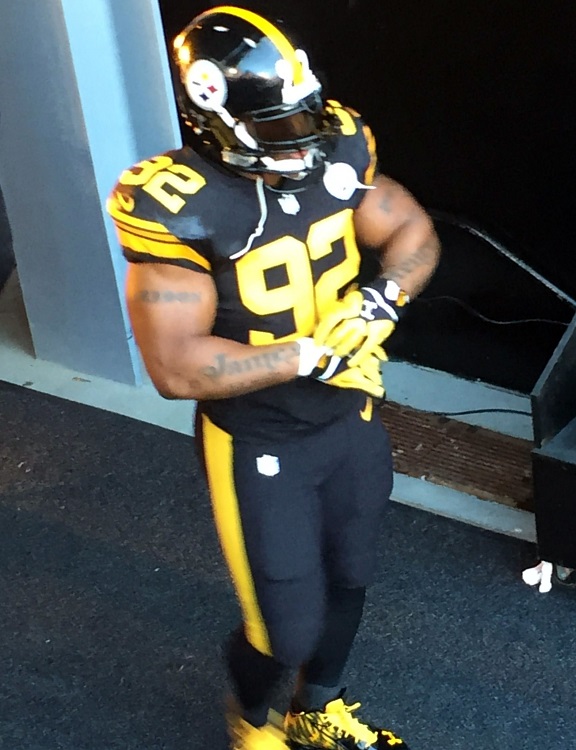 A Christmas Day game brought flashbacks to days when my wife and I had to split our holidays between our families. Lots of stress commuting between cities trying to keep everyone happy. Yesterday, the challenge was spending the holiday with my immediate and extended Steelers families. Of course, my son Max got me for the Xmas exchange and got me a nice piece of Steelers headgear that will be especially useful at away games with hostile crowds such as those that frequent Paul Brown Stadium: 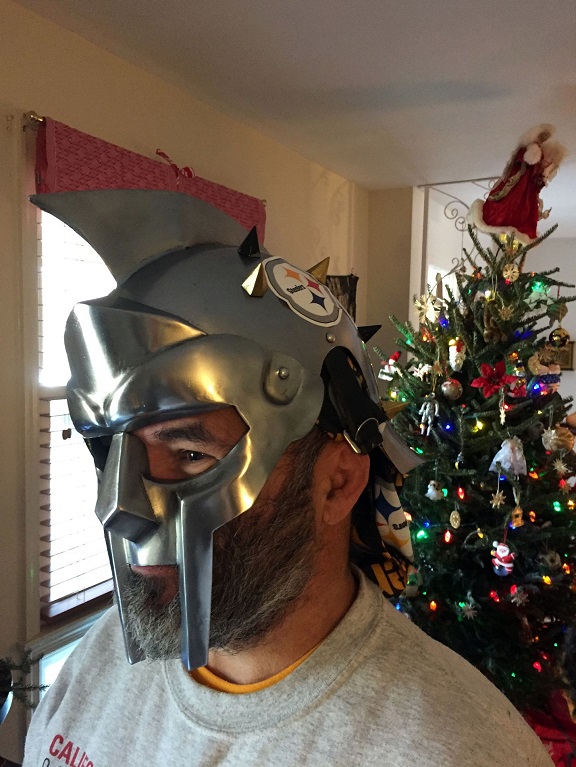 After exchanging gifts and breaking bread with wife, sons and their significant others; it was getting close to game time. I saved the family from my histrionics and drove across the bridge into Virginia to the Tortoise & Hare Bar in Arlington which opened their doors Xmas day just for the game. Some stalwart fans were there with nary a fan from any other NFL team to be found within. 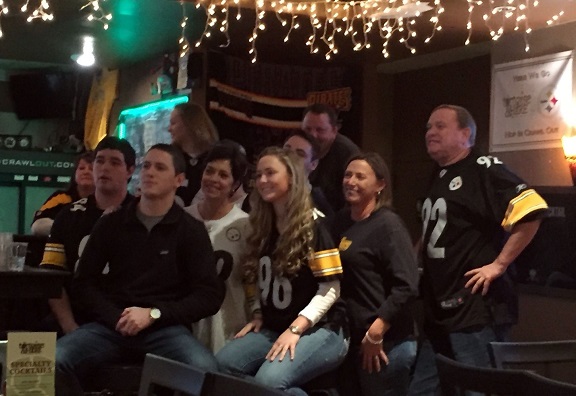 I met these three fans that hail from Allentown, Pennsylvania – I thought at first, they were from the Allentown neighborhood in Pittsburgh, but these folks were from the Lehigh Valley. 280 miles from Pittsburgh but only 90 miles from New York City and 60 miles from Philadelphia. Geographically, that is Eagles country. The Father was visiting his son who is stationed outside of DC. I love the stories of how folks became Steelers fans. Dad says that back in 1982; his grade school’s colors were Black & Gold, so he picked the Steelers as his team – 43 years later he is still an ardent fan and had passed his legacy to his two sons. 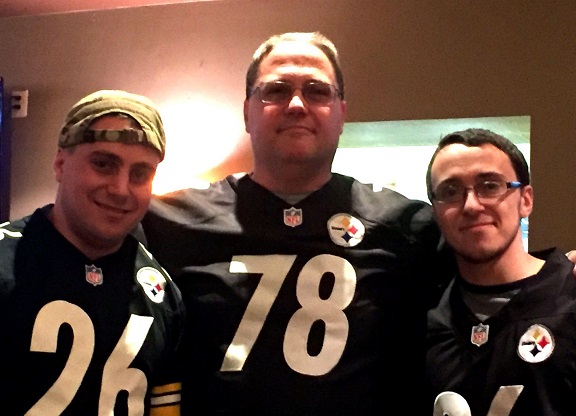 A complete Xmas; nice relaxed time with my immediate family in the morning; a nice relaxed game in the early evening with my extended Steelers Nation family. 2017 Steelers Xmas Carols