I couldn’t watch the Pittsburgh Steelers play the Cincinnati Bengals since I was in Djibouti. I did wake up at 4:30 in the morning to listen to the first half of the game via Steelers Nation Radio. Unfortunately, the internet connection was sporadic so missed significant portions of Bill Hillgrove, Tunch Ilkin & Craig Wolfley announcing the game.

Not that I missed much great play by the Steelers. An interception on the opening drive. Ryan Shazier’s scary injury so early in the game. Andy Dalton connecting with A.J. Green. Joe Mixon making progress on the ground. It sounded like the Bengals were on fire and the Steelers play was having the effect of throwing buckets of gasoline to quench the flame.

Because of the time difference; I had to leave with the Steelers down 0-17 with about 30 seconds in the half. Just before leaving the hotel to head to the site, saw that the Black & Gold somehow manage to put three on the board before the half ended. Normally, being down by two touchdowns with a whole half left to play would leave me pessimistic but with the hope that the talented offense could make up the difference. Honestly, this time just listening to the game, it seemed like the Steel men were out of it. Could they rally with Ryan Shazier on his way to the hospital, status unknown?

A couple of surprises were in store for me. First, here in Djibouti American football is practically unknown. Soccer dominates the sports television. As always, my Terrible Towel was handy and during a morning review I brought it out to explain its history. I had to communicate through interpreters since most of the people speak Somali, Arabic, Afar or French. Very few English speakers – but as soon as I unfurled the towel one of the guys automatically blurts out “Pittsburgh!” I was stunned and just laughed; Yoi, did Myron Cope ever conceive that his creation would be recognized in Eastern Africa and immediately associated with his city. 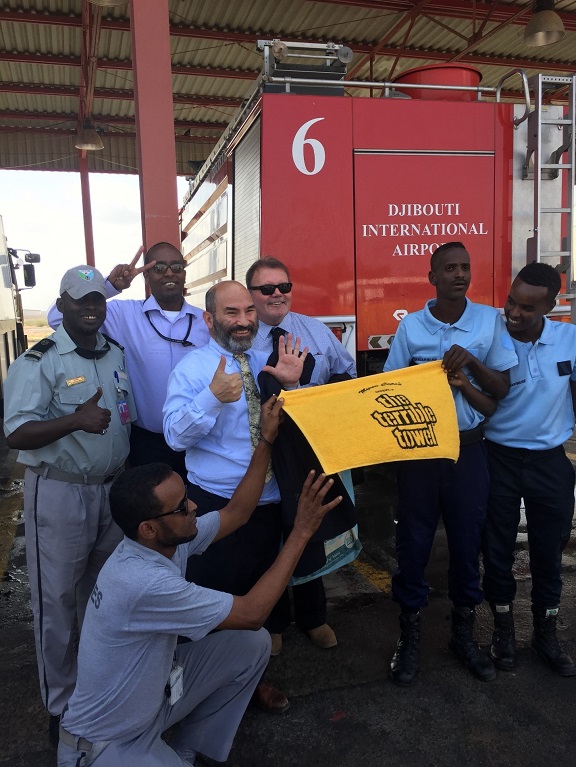 There was no Wi-Fi at my work site, so was unaware of the final result until I got back to my hotel hours after the game was over. Shaking my head, several messages ping from my wife: “Terrible game but at least they won 23/20.” Followed by, “Bad playing, bad reffing.” Then, “thought Shazier paralyzed – that was bad but it may be temporary.” Finally, “They (the Bengals) blew a 17-point lead. We tried to give it away but they too lame to get it.”  I had left the room thinking the Black & Gold probably would not pull it off – but briefly forgot the power of the terrible towel, and the opponent it was the Bungles afterall.

Ryan Shazier in my thoughts. Hoping he has a full recovery; needs to take as much time as needed. Time for others to step up in his place.

I’ve been busy catching up on all the news on JuJu Smith-Shuster’s suspension. The Bengals getting away with another cheap shot to Antonio Brown’s head. And not this revelation of team’s going off sides to injure Chris Boswell. From what I have seen, no issue with the flag on JuJu, particularly the taunt. I do not agree that Vontaze Burfict was “blindsided.” He did hit him in the helmet so okay; but JuJu was easily within Burfict’s peripheral vision and any tackler should know they are subject to being blocked. He was not defenseless to me.

JuJu getting the same punishment as Rob Gronkowski who physically assaulted and concussed a player defenseless on the ground appears ludicrous to this average fan. I stand by my belief that the NFL has become a Sham, but I remain a Pittsburgh Steelers Fan.

The Steelers comeback left me Thunderstruck – the dudes in the video are not some Good Ole Boys from Dave Bryan’s old neck of the woods, Steve ’n’ Seagulls is a Finnish band.

Hope to get home in time to drive up for the Ravens game! Just hope Roger’s striped flying monkeys don’t wreak havoc on the game.