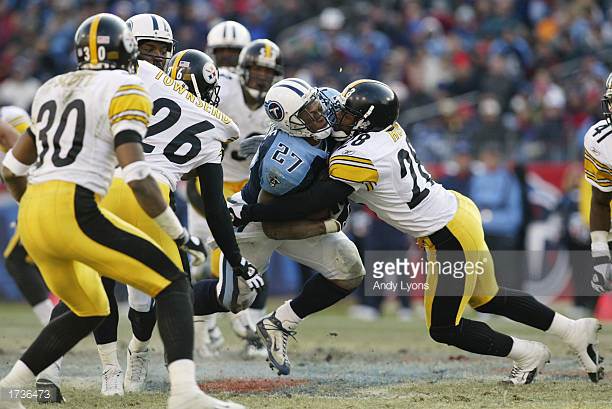 Bringing you another Pittsburgh Steelers’ interview courtesy of our good friend Ron Lippock of the Pittsburgh Sports Daily Bulletin. Today, Ron talks to ex-Steelers safety Chris Hope. Hope was drafted by the team in the third round of the 2002 draft, made 32 starts in four years with the team. The two discuss Hope’s close relationship with his teams and transitioning from NFL player to full-time dad.

First, can you let readers know what you are doing with yourself since your time in the NFL?

Oh I’ve been a full-time dad now since the NFL. It’s been more difficult than being a full-time athlete! There’s always something to do.

I also stay involved with the Titans, doing alumni appearances. And I stay connected to the business world through my relationships I made in the NFL. Really, I’m just enjoying life.

How hard was the post-NFL adjustment for you?

It wasn’t that big of an adjustment. I’ve heard many things from many of the elder players who talked about how hard it was but I prepared for it. I never allowed what I do to define who I am. Just focusing on football makes it too hard to let it go so I had other interests.

The politics of the league, the way it works as you get older, that took the love of the game away from me some too. It got to be about my age. You can train to get faster and smarter but you can’t change your birth certificate. Father time is undefeated. And the CBA doesn’t help the older players. They’re required to make too much money for some teams due to the minimums.

Getting to draft day, were you surprised to be drafted by the Steelers? how did you find out?

Now I know better, having experienced the NFL, I know now why they drafted me. There was a lot of interest in me by Pittsburgh at my pro day. Willie Robinson, the Steelers Defensive Backs Coach was there. Bryant McFadden went to college with me and he was there too cheering us on. He told me the Steelers coach was watching me and making good comments about me. I’m not sure how he heard, if the coach was speaking through a microphone!

But I ran a 4.45 40 on grass, which was a fast time for a safety. It was a good fit. But then, I was just focused on having a good pro day. I didn’t know what would happen for sure. I knew the Eagles were also interested but they drafted Michael Lewis.

Who let you know?

Coach Cowher called and asked if I would be excited to be a Steeler. My family was watching the draft with me when he called and I was just so excited with the history. Donnie Shell lives nearby and I went to school with his daughter. All know about the history of the Steelers. I had the Florida State history and then got to play for one of the most historic franchises in all of sports.

Who helped mentor you when you got to Pittsburgh – on and off the field?

It was  a blessing – one of the biggest I ever had. I had a group of guys that helped me. I was a hard worker, playing at Florida State I had to know how to prepare myself. When I got to Pittsburgh and was in the locker room now with Ike Taylor, Jerome Bettis, Deshea Townsend, Ward, Flowers and Alexander…

I wanted to be a first rounder but I fell to the perfect spot. The standard of excellence was echoed throughout the organization. I had that at Florida State  but to have it here, at the highest level in Pittsburgh…I think that’s why many talented guys don’t reach their potential – they never had that to help them.

Deshea was probably my closest mentor. He knew every position on the defense. All the guys were leaders. That’s why we were so successful. They set the standard and welcomed the younger talent. They made us feel appreciated. That we had a role. They got to know us, so they could challenge us to be our best.

We just got off a tough New England loss. You were the last Steeler to intercept Brady before last night’s game. How do you beat Brady/New England?

New England is an interesting team to play. Hats off to them – they’ve been the standard of excellence now. If they were a college team they’d be a top two team, like Alabama, every year. They are always in the discussion for the Super Bowl.

The first time we beat them we beat them bad, and they beat us bad in the championship game. They’re not always the most talented team. But they try to perfect everything they do. They limit mistakes. When you play them you have to pay attention to the X’s and O’s. You can’t make major mistakes like turnovers or blown coverages. They also do a great job of finding the mismatches and talking away your best player.

On Sunday, my opinion is we didn’t do that.  Gronkoski was fresh, coming off an off week. They should have double-covered him and forced someone else to beat them like New England does. That’s my take, to be honest.

Player for player, they never have the best roster. But they are well coached, and they don’t make mistakes.

I think coaches get cocky. They say they will just do what they do best. That our men are better than your men.  That we don’t care what you do because we have x or y player.  But it all comes down to being disciplined for New England. They don’t have better players, they are just more disciplined. They don’t make as many mistakes. I think if you talk to other players they’d agree.

Tell me a bit about those teams you played on.

We were just so close. It’s amazing. We were closer than any other team I’ve ever played on. It was unreal. We are all still friends and I can now only reminisce on it. Every Monday Night we would all go to Benihanas and eat as a team. Black or white, it didn’t matter. We all hung out together. Then we’d go to Farrior’s house and play poker and watch Monday Night Football after working out. And we worked out because we wanted to.

Fans should appreciate that. We are all so close. Troy even came out with us, and he was like a groundhog – we’d see him every sixty or seventy days!

We also did each other’s football camps. I remember going to Deshea’s camp in Mississippi. We’d take a bus from the hotel to the camp. The jokes we told on the bus…I could write a book!

And we’re all still close. Last night, a bunch of us had a group chat. Guys from all over – former Steelers yelling at each other about  missed tackles and bad calls…If you didn’t turn your phone off it would go on all night. I’m still so passionate about the game. It sucks we can’t play any more!

So, with that in mind, it must have been hard to leave in free agency…?

I love the Titans organization. They accepted me as an original Titan along with the liked of Eddie Gorge, Dyson, Hopkins, Bishop…it was a great gesture.

But, the heart of me is a Steeler. Mr. Rooney gave me an opportunity to fulfill a childhood dream that I can’t ever repay. To play with those guys. We were like brothers. Now some of us are in our forties but we still talk to each other like we’re in our twenties!

I remember the day I signed with the Titans. Troy called me and we talked for two-to-three hours. We both cried…he was happy for me but at the same time, it was over. We were just starting too. I look at Earl Thomas and Chancellor in Seattle – the run they had. That was us. Me, Troy, Ike…Then I left. They won a Super Bowl and went to another one. I had a great career with the Titans, but I will always wonder what would have happened had I stayed. How much would we have won? The pain of that call was like a death in the family…

That’s how tough it was. I still think about the night we won the Super Bowl. The confetti coming down and hugging each other and giving each other high fives. Me, Desha, and Ike all took a picture of ourselves together in the locker room. And I remember getting on the bus afterwards to the hotel and wondering what happens now. It was my first time as a free agent and I was wondering if that was my last game in black and gold? It was on my mind.

I can honestly tell you. On that team with those guys, it was a brotherhood. We were unselfish – it was about winning. We had a genuine love for the game of football. I never had that to that level – not even with the guys I grew up with and played with in high school. We can still not see each other for five-to-six months, but when we get together, it’s like we never left.