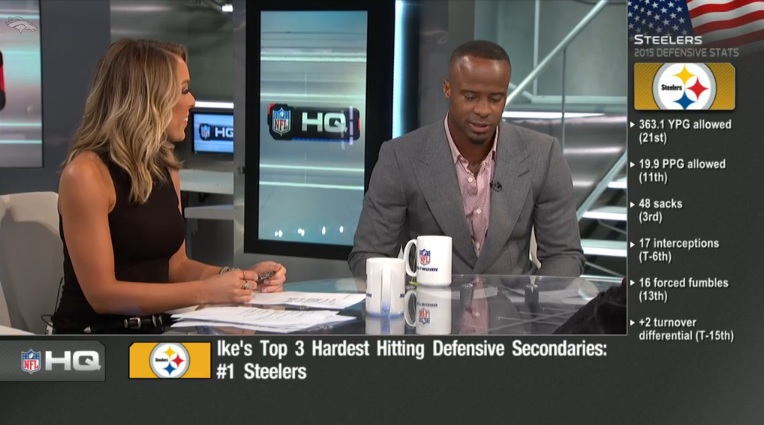 Typically when we get the opportunity to write about a former member of the black and gold, particularly a former recent member, I would like to think that it tends to be a good thing. Unfortunately, that is not the case today.

Longtime Pittsburgh Steelers cornerback Ike Taylor, who has spent the past few years working as an analyst for NFL Network, and whose work I have referenced a handful of times during that span, is part of a lawsuit filed by a former employee for the network, who spent a decade there as a wardrobe stylist prior to her being fired last year.

The plaintiff, Jami Cantor, named Taylor among about six or so individuals, five of them being former NFL players, three of those being current employees at the network, accusing them of sexual harassment. The other players named were Heath Evans, Marshall Faulk, Warren Sapp, and Donovon McNabb.

The plaintiff’s lawyer alleges, further, that “the supervisors [of the NFL Network employees] knew about it, the supervisors observed it”, suggesting that the network, at least at some level of corporate priority, would have been aware that such behavior was going on, yet turned a blind eye to it.

The players in question remaining with the network—Taylor, Evans, and Faulk—have been suspended from their duties as well as they have opened up an investigation into exploring the veracity of Cantor’s claims.

These accusations surface in a time during the cultural climate in which sexual harassment is at the forefront of the public consciousness. The ‘Me Too’ movement, of sexual harassment victims sharing their stories, was even named Time magazine’s Person of the Year.

Many powerful individuals have been accused of sexual harassment, some of whom have acknowledged the truth of the accusations, while others have denied them. All, however, have in some form or fashion suffered the consequences of the allegations.

I would like to make a request that we attempt to restrain ourselves in the comments section to this article. I understand that this broaches on some current hot-button issues in an already tense social climate, but we don’t need to dump all of our societal waste here.

Needless to say, however, I would imagine that many of us will be interested to see how this case, and the investigation, play out for Taylor, who is a beloved member of the Steelers fraternity, remembered fondly for his play, as well as his demeanor, and his charity.

I certainly hope that the allegations—all of them—are untrue, but if they are, the individuals found to have done wrong should be held accountable for their actions.