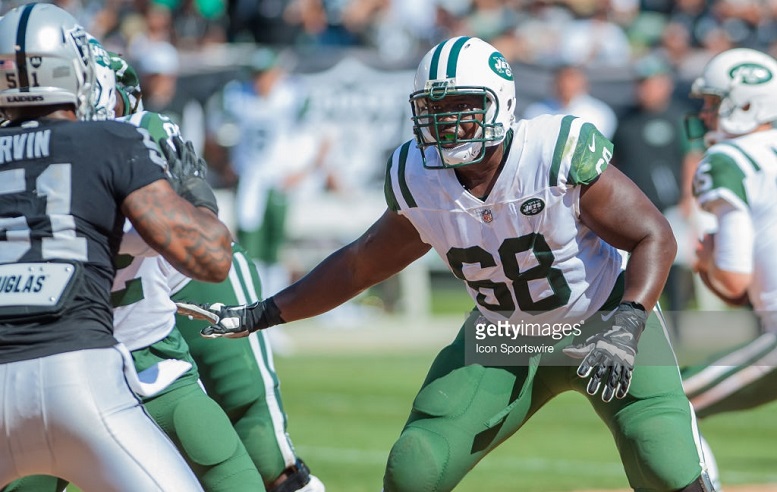 Understandably, there’s been quite a bit of talk this past week about James Harrison and what ultimately took place behind closed doors prior to the Pittsburgh Steelers releasing him last Saturday. What hasn’t been talked about a lot, however, is that Harrison’s Sunday debut for his new team, the New England Patriots, will more than likely include him squaring off quite a bit against a former teammate of his, New York Jets left tackle Kelvin Beachum.

Beachum, who was originally drafted by the Steelers in the seventh round (248th overall) of the 2012 NFL draft out of SMU, played four seasons in Pittsburgh prior to him leaving via free agency in 2016. After spending the 2016 season with the Jacksonville Jaguars, Beachum’s option years weren’t picked up by the team and he ultimately signed a three-year, $24 million contract with the Jets this past March. This season with the Jets, Beachum has started every game and has played 99.8% of all offensive snaps.

If you believe the stats kept by Pro Football Focus, Beachum has given up just 3 sacks this season and 25 total pressures for a Pass Blocking Efficiency rating of 96.4. Beachum, however, hasn’t graded out very well this season as a run blocker.

When it comes to Harrison, one can only assume that he’ll play mostly on the right side of the Patriots defensive line on Sunday. Harrison, as most of you already know by now, only played 40 defensive snaps with the Steelers this season on his way to registering just one sack. While we didn’t see much of Harrison this season, it’s assumed that he can still defend the run reasonably well.

Sunday won’t be the first time that Beachum and Harrison have faced off against one another outside of practices when they were teammates in Pittsburgh, however. In 2013, Harrison was a member of the Cincinnati Bengals and Beachum was the Steelers starting left tackle and in the Week 15 meeting between the two teams the linebacker played 11 defensive snaps.

Harrison, however, was used quite a bit as an off-the-ball linebacker with the Bengals that season and while I can’t remember specifics about that 2013 game, I don’t think he and Beachum squared off many times during it. Harrison, by the way, did record three total tackles in that 2013 game with two of them coming following receptions.

Beachum, by the way, acknowledged his forthcoming matchup against Harrison on Twitter immediately after the linebacker signed with the Patriots and in doing so also congratulated his former teammate on quickly finding a new team to play for. A few days later, Beachum talked more about his experience as a teammate of Harrison’s and how he firmly understands why he wanted out of Pittsburgh. He also said that he looks forward to playing against him on Sunday.

“I have a ton of respect for him, a ton of admiration,” Beachum said of Harrison, according to Rich Cimini of ESPN. “I’d love to see him out there.”

So, how many snaps will Harrison ultimately play Sunday against the Jets? It’s hard to say for sure but it’s hard to imagine him playing a good portion of the game. Regardless of what that total amount winds up being, you can bet that I’ll be one of several Steelers fans who will replay that game to see how he played and especially against Beachum.