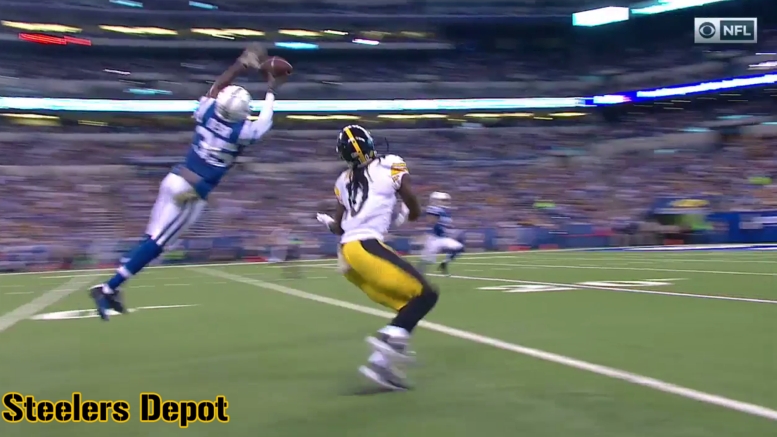 The third quarter of the 2017 regular season has been the cleanest yet for quarterback Ben Roethlisberger. While he tossed four interceptions during the four-game span since the bye week, those were the only throws that he made that I would have deemed ‘turnover-worthy’, making it easily his ‘safest’ quarter yet.

The first turnover-worthy throw—and interception—came in the first game after the bye, on the road against the Colts in Indianapolis. Roethlisberger early in the game looked for Martavis Bryant on a deep throw.

The wide receiver, I think, bears a lot of responsibility on this one, because he couldn’t locate the ball at all; however, the cornerback consistently maintains inside leverage and makes an easy read on the pass to intercept it.

Roethlisberger was clean throughout the next contest against the Titans, which was his best game of the season, throwing four touchdown passes to zero interceptions while the team put up 40 points on the night.

But he threw two interceptions a week (and a half) later hosting the Packers, the first of which was the product of a tipped pass. This is an important issue because he has had 11 passes tipped this year in 12 games, and this is the second that has been intercepted.

Here he was unable to get the ball over the head of the outside linebacker, leaping in the air while working against Chris Hubbard at right tackle. While you want to fault the lineman for not getting the defender down, remember, it’s the defender who has eyes on the quarterback and knows when to jump.

Later in the game, facing a bit of pressure, Roethlisberger stepped to his right and looked for Eli Rogers coming over the middle. He didn’t see Damarious Randall following him in coverage and was able to make a great play to break on the ball for an impressive interception.

The last one game just this past Monday, on the opening drive against the Bengals. With the defense blitzing, again, Roethlisberger faced a bit of pressure and moved to throw quickly, which did not pay off for him.

Similar to the Randall interception, he did not have time to diagnose Adam Jones, whose zone was vacated due to a short crossing route, free to lurk in coverage, breaking on the throw as the quarterback tried to feed Xavier Grimble down the field.

An unfortunate commonality is that most of Roethlisberger’s interceptions have come in pressure situations. In this segment, two were on third and long and one was on second and very long. In all, he has had 10 turnover-worthy throws on third and long this year, and another five on second and long, with 18 total throws that were or could easily have been intercepted.