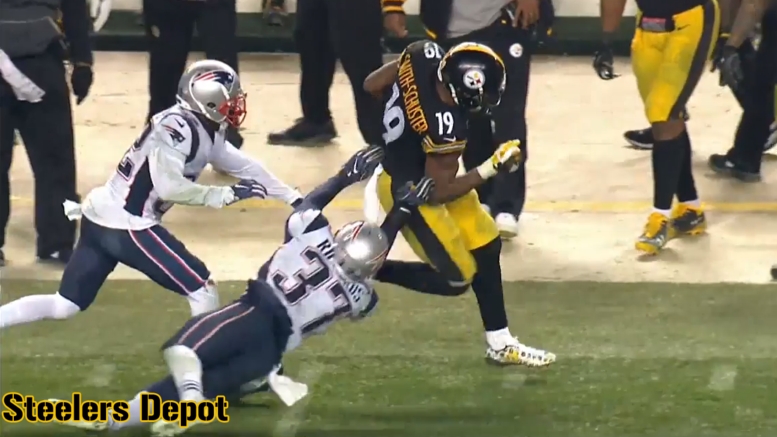 Over the course of the next couple of games at least, one would figure that much of the Pittsburgh Steelers’ success in the passing game is going to have to fall upon the shoulders of 21-year-old rookie wide receiver JuJu Smith-Schuster.

Through 12 games—having missed two due to injury and suspension—the second-round pick has caught 43 passes for 699 yards and five touchdowns. His receiving yards per game ranks first among all rookies in the NFL this season, and now he will have a couple of games without Antonio Brown’s 15 or so targets to compete with.

Of course, Smith-Schuster does more than just catch passes, but it is a pretty important function of what he brings to the table. In preview of the next couple of games, let’s take a look back at some of his work from the Patriots game on Sunday.

The rookie came up big in several moments during the game, which included two clutch catches that converted on third down. The first of those occurred about midway through the first quarter, the team facing a third and 10. Smith-Schuster got jammed hard at the line, but was able to work underneath for a crossing route and catch-and-run of 13 yards.

Later, about midway through the third quarter, he moved the chains a second time, in this instance with the offense up against a third and three. The Patriots were late to match up their coverage and Ben Roethlisberger found him on an in-breaking route for six yards, on which he made a diving reception over the middle of the field.

Since his first game of the season, however, his value has always been measured in his total body of work, not just his receptions. He didn’t even have a target in his first game. He often plays an important role as a blocker, and in this example below helped to hold off pursuit on a 10-yard rush.

Into the third quarter, Smith-Schuster was a part of the blocking scheme looking to free up Le’Veon Bell on a sweep around the right edge. Wide receivers are naturally better in space than other typical blocking positions, so when you have one that can block, it certainly has its benefits.

Obviously, his highlight of the game came much later, with under a minute to play, when he took a crossing route 69 yards to set the team up with first and goal. Things didn’t go as planned after that, but it doesn’t take away from his play here.

The Steelers will need him to continue to step up as they look to secure at least the number two seed, remaining in the running for the top seed as well. But I will say this about him: other than his energy, he has rarely looked like a rookie this season.