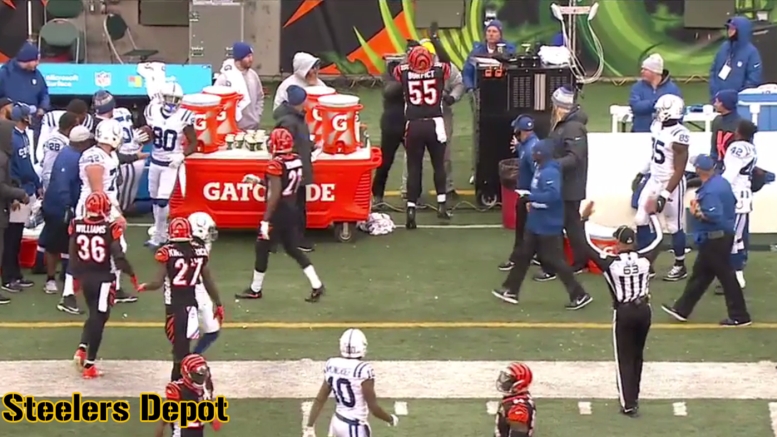 Earlier this month, Andy Benoit published an article on Monday Morning Quarterback after spending a day with Cincinnati Bengals inside linebacker Vontaze Burfict, one of the most polarizing players in the league, and generally regarded as the dirtiest—even if the Bengals like to point the finger at Mike Mitchell whenever that comes up.

His teammates voted for him as one of their captains this year. He has already served a three-game suspension for his conduct during the preseason and been fined for his play in the regular season. Yet he still doesn’t view himself as a dirty player. Of course, I don’t know if anybody has ever admitted to being a dirty player.

“There’s a fine line in football”, he told Brandt when asked the question. “And I think that I’m right at that line. Back in the day they’d probably say, ‘Vontaze Burfict, he’s a great linebacker’. But rules change. Things change. The game changed. And I have to change with it”.

Perhaps he has changed the way that he plays, to a degree. But he was still caught in the Bengals’ game against the Colts for no reason shoving somebody deep in Indianapolis’ bench, for which he has received no discipline. That happened after this interview took place.

“There’s multiple ways I’ve been changing with the game. There are plays where I’ve could have hit somebody and I’ve let off, because obviously you get a flag in this day and age”, he said. He credited his head coach, Marvin Lewis, and his defensive coordinator, Paul Guenther, for helping him to “change with the game. And I’ll still be that dominant linebacker”.

I have certainly gone on record more than once to compliment Burfict for being a very good linebacker. No matter what he might do on or off the field that is out of line, you can’t take away the fact that he is very good at what he does. He is a Pro Bowl-quality player.

Just this season, he already has 31 tackles in only four games, with a sack and two passes defensed. He had 101 tackles in 11 games a year ago. In his second season, the only one in which he played in and started every game, he had an eye-popping 171 tackles.

He said that he doesn’t “worry about” his reputation and about people talking about what he does on the field. He just got fined for kicking at Pittsburgh Steelers fullback Roosevelt Nix’s head, about which Le’Veon Bell said that he needs to “go”.

“He’s just saying that, obviously, because he got hurt on two incidences of dealing with me. Both tackles were clean”, Burfict said. “One time he tried to still go for yards and the safety hit him and knees got tangled up. That’s football. He’s a great player, but I don’t listen to what other players say about me around the league. It doesn’t bother me. Because I know who I am”.

Everybody knows who you are by now. Except perhaps yourself.