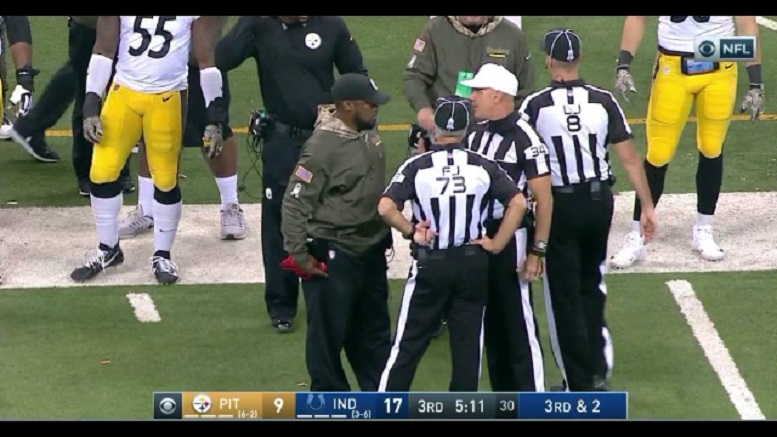 The Pittsburgh Steelers seemingly forced a turnover in the third quarter of their Sunday road win over the Indianapolis Colts thanks to linebacker Vince Williams ripping the football away from running back Frank Gore after he had caught a short pass over the middle on a 2nd and 9 play. However, after Williams pounced on the loose football, the referees claimed that the fumble did not count as Gore’s forward progress had been deemed stopped. Steelers head coach Mike Tomlin then proceeded to throw his red challenge flag even though forward progress rulings can’t be reviewed.

During his Monday press conference, Tomlin was asked why he thew his challenge flag even though he probably knew that particular call on the field was not up for review.

“I know, I just wanted the discussion,” Tomlin said while laughing. “It’s a frustrating element. Sometimes judgement is not up for review. I understand that, but sometimes that judgement is cloudy. I wanted to know what was the indication that forward progress was stopped. Was it the whistle, and if it was, then the ball was out before the whistle and how is that reviewable? Is there audio on the review? It was an interesting discussion but it was a discussion I thought was worth having. I was frustrated because I thought we got the ball. But some rulings are judgement and are not subject to review and I understand that element of play as well.”

If you look at the replays it’s clear that Gore perhaps got the benefit of the doubt when it comes to his forward progress being stopped. Besides, you don’t hear any whistles on the field until after Williams had recovered the fumbled football. It’s no wonder that Tomlin was frustrated and the same goes for Williams.

“I went in with the intention of ripping the ball out,” said Williams after the game. “I popped the ball out before his knee touched the ground. I got robbed. There was no whistle.”

The Steelers trailed the Colts 17-9 at the time and while that particular Colts drive ultimately came to an end on the very next play, their ensuing fourth down punt was downed at the Steelers 1-yard-line. That’s a hell of a yardage swing for sure.

With Tomlin currently a member of the NFL Competition Committee, you have to wonder if forward progress calls being reviewable is something he might be able to push for in the future.